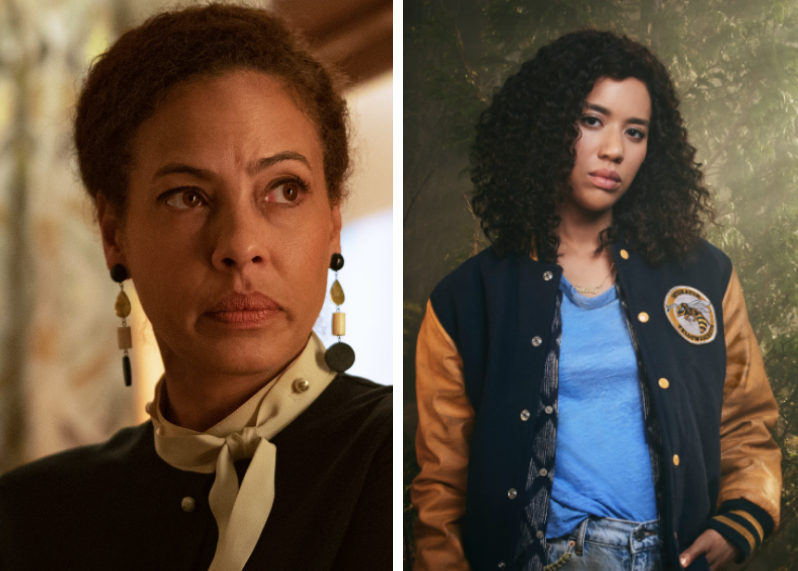 Yellowjackets on Showtime is a drama that is equal parts plane crash action film, female-leading Lord of the Flies, and the most exhilarating nostalgia trip. The premise of the show — the Yellowjackets girls high school soccer team, crash on their way to Washington from New Jersey to play in the national championship and end up stranded in the Canadian wilderness — instantly pulls you in. A murderer’s row of awesome actresses will keep you invested.

The series also stars counterculture queen Juliette Lewis, the always surprising Christina Ricci, the enigmatic and dark-tinged Melanie Lynskey, and the dynamo Tawny Cypress. The show is separated into primarily two timelines, one in the past when the crash occurs and one 25 years in the future when a new risk threatens to expose the women and break the unspoken rule of “What happens on the island, stays on the island”.

I had a chance to Zoom with Jasmin Savoy Brown and Tawny Cypress to talk about this amazing show and the importance of the depiction of their character Taissa.

If you’ve loved Tawny Cypress since Heroes, you know her character will become your complicated fave. She’s as down to earth as you could ever hope for, “I’m a Jersey girl, I grew up on the Jersey Shore”, Cypress told me playfully, allowing a bit of the Jersey accent to come through.

Jasmin Savoy Brown’s presence is undeniable and her personality is indefatigable. When she entered the chat, the first thing I noticed was her cotton candy pink, newly shorn hair under a beanie.

“I needed space from my roles,” she explained brightly. Taissa’s T stands for “Top” and it encompasses everything she is. She’s at the top of her game, the top of the list, the top of the world. And she’s just Type A enough to demand to stay there at any cost. She’s a character that could easily be seen as a caricature, but Savoy Brown and Cypress give Taissa some much-needed multidimensionality.

“I’m a bit of a nerd for the Enneagram” Savoy Brown says when I ask about how she and Cypress developed the mannerisms for Taissa, “It’s a personality test that estimates there are 9 types of people. I’ve been researching more in the last year and I’ve gotten pretty good.”

Cypress agreed, “Jasmin and I both understand [Taissa] to her core. So a lot of what we brought to the character was just innate and matched up. We worked really hard to find a level ground in the things that make Taissa — Taissa. From the way she stands to the way she says certain words.” Both women recounted their discussion of whether Taissa would say “ee-ther” or “eye-ther” in conversation.

“It was so clear to me what number Taissa is, which is a three with a two wing.” Savoy Brown says, referring to the Enneagram test. “This means she’s an Achiever and a Charmer. I sent Tawny all the reading on the Enneagram just as a fun way to get the psychological piece down.”

Though the two women didn’t film together, they were very close and communicated on every facet of Taissa. This dedication even extended to them meeting in a park and practicing crouching and growling as preparation.

So what makes the actors so passionate about their roles?

“Anything that examines female relationships, I’m immediately drawn to.” Savoy Brown answers thoughtfully, “We don’t have very many honest examinations of the dynamics between women that explore the ugly and the beautiful, the savage! Knowing it would be cast with a diverse array of beautiful brilliant women sounded like a dream.”

Cypress agreed and shared her own reasons, “It spoke to me and I wanted to represent these minority characters you don’t see very often.” She went on to add what made the show stand out for her. “I think it’s interesting to watch the aftermath of this horrible situation and have it come back and relive itself. These things never really go away as a metaphor for pain and for trauma. These wounds never fully heal.”

The women have formed a firm bond even though they don’t have scenes together. Their bond only helps make Taissa into a five-dimensional character. Together they give her layers upon layers and authenticity that’s key to her success.

In Yellowjackets, Taissa is married to a Black woman named Simone played by Rukiya Bernard. Together they have a son, Sammy (Aiden Stoxx), and Taissa is attempting to run for State Senate.

The very public-facing position is antithetical to the whole idea of “stay low” the survivors all agreed to. Savoy Brown has her own theories.

“It’s not just a hunger or a drive, but it’s like a need for Taissa to always be accomplishing and achieving. If she’s not achieving she’s not excellent. And if she’s not telling everyone how excellent she is at everything, it means that she’s failed and she has to sit with herself and examine. By keeping herself busy she doesn’t have to sit with the pain and trauma of what happened.”

As a Black queer woman herself, what does the role mean personally to Savoy Brown?

“It was huge! It’s very healing for me anytime I see queer women of color on screen. And especially since she is so ‘five-dimensional’ as you said, we get to see the good, the bad and the ugly. Which is healing because it’s in all of us.”

It’s a very Earth-shattering thing that’s done so quietly. Taissa naturally inhabits these marginalized identities, and she’s not perfect. She’s not tokenized, she has her flaws, but she is a fully rounded human being and she can be that without having to worry about it negatively affecting the perceptions of the audience towards all queer Black women.

“Just being ourselves is activism.” Savoy Brown adds.

Cypress gives us an idea of the surprises in store for the rest of the season.

“[Episodes] 7, 8, 9, and 10 are pretty crazy for Taissa, and without giving anything away, it’s going to really shock you. You’re gonna be like holy sh*t this is crazier than I ever thought!” Cypress’ eagerness is endearing and you can see the passion and love she has for the character and the show. I want everybody to have a lot of fun with the show. There’s a lot to take in so just keep your mind open. Understand that these women, these flawed characters, don’t have to be perfect. They don’t have to be friendly, they don’t have to be pretty all the time to be somebody you root for. And that’s what they are. These are women you root for in spite of themselves, which is what I like about this story so much.”

Yellowjackets airs Sundays on Showtime and is available on the Showtime app the next day.