Tawny Newsome is a well-known entertainer, musician, actress, and comedian who stars on BET’s The Comedy Get Down. She plays Nina, the tour manager to real-life comedians DL Hughley, Eddie Griffin, Cedric the Entertainer, George Lopez, and the late Charlie Murphy.

This Black Girl Nerd is more knowledgeable than a library and more in demand than an iPhone!

Black Girl Nerds: What came first for you as an entertainer, being an actor, comedian, or singer?

Tawny Newsome: I guess my first-ever gig was playing a dancing piece of laundry in elementary school. We were doing Cinderella, and all the kids who didn’t have an actual part in the show got shuffled into this big chorus number, which, as I remember, was just called “The Laundry Dance.” I signed up late… probably after my friends were already signed up, and by the time I joined the show, they’d had so many kids wanting to participate that they split us into 3 groups and then played the song three times in a row in the middle of the play. I’ve been elbowing my way into people’s projects ever since.

BGN: Do you have any difficult portraying your character on BET’s The Comedy Get Down?

TN: None. The guys are all great. The crew was great. I never had long days on set. It was such an easy gig I sometimes felt guilty. Then I remembered what I was being paid… and I no longer felt guilty [laughs].

BGN: On The Comedy Get Down you are the manager of all male comedic talent, what challenges does your character face with that if any?

TN: Oh, you know, just keeping them on time, keeping them in check, and every now and then trying to subtly suggest women aren’t merely decorations created solely for their amusement? I jest, I jest.

These guys are all wonderful men and really feel like uncles to me. But sometimes, their comedy is, uh, not exactly my taste? They’re all incredible comedians with long careers, so they have every right to make any jokes they want. But as a feminist, I couldn’t sit by in a scene and not have a response to some of the things they’d say. And the guys were super open to letting me improvise and totally supportive of my perspective, which allowed Nina to have a really strong point of view. Hopefully, for the audience, they’ll see that just because the jokes aren’t all necessarily ones that I might make, the guys and our writers allowed me to have a voice and an opportunity to show how I felt about it, making Nina a character I’m proud to play.

BGN: What does being a part of Black Entertainment Television mean to you?

TN: “Why can’t we have a WHITE Entertainment Television?!” Oh, I’m so sorry, like ten million white dues from Twitter just took over this interview… I’m back now. I like being on anything with Black in the name.

BGN: How did the Bajilliion Dollar Propertie$ parody come about?

TN: Our creator, Kulap Vilaysack, loves real estate shows like Million Dollar Listing and our Exec Producers, Tom Lennon, and Ben Garant, created Reno 911. So Bajillion does to the real estate reality shows what Reno did to Cops. I play Chelsea Leight-Leigh, social media savvy, semi-spoiled asshole [laughs]. I mean, we’re all kind of spoiled jerks so that isn’t saying much. But it’s an incredible, funny, totally improvised show with the only hiccup of appearing on the (now defunct) Seeso streaming service. It was a great home for the show while it lasted, but now you gotta download it on iTunes to see it. We have three full seasons and a fourth unaired waiting in the wings for a new network to swoop in like a knight in shining streaming-video-on-demand armor!

BGN: Who is someone you wanted to partner with on stage but haven’t had the chance yet?

TN: Too many to list. I’m a total fan-geek. Most of my heroes are musicians, some of whom are long gone, sadly. When I was working on stage at The Second City in Chicago, we’d have celebrities and musicians drop by constantly to see the show, often inviting them to join us onstage for the improvised set at the end. And as a musician, I’ve been asked to sit in or jump up onstage with so many incredible artists, simply from meeting them in another context. Some of the rooms I’ve been in would make your jaw-drop. And it’s gross to name drop, so I won’t. But I still see myself so much as an outsider, as a fan, that sometimes I look around and I’m like, whoa, how did I end up here, with them? 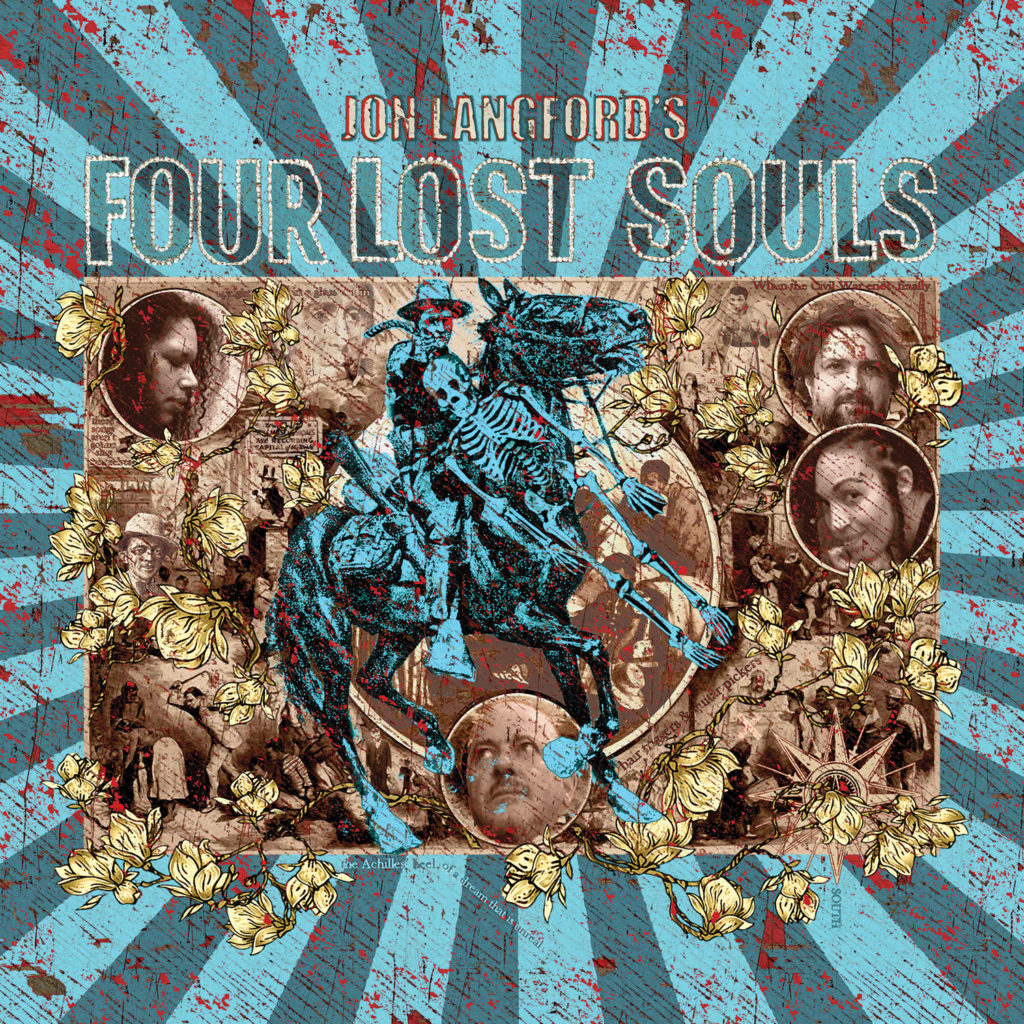 BGN: Speaking of music, what is the inspiration behind your newest album Four Lost Souls?

TN: My longtime cohort and collaborator, Jon Langford, was invited to record in Muscle Shoals, Alabama, by this legendary producer, Norbert Putnam. Putnam played bass with Elvis and has produced tons of albums. So Jon arranges this little foursome consisting of me, my old friend and vocal powerhouse partner Bethany Thomas, and her guitarist friend John Szymanski. The four of us took 13 songs and arranged them in a unique way. Langford, Bethany and I wanted the album to sound like 3 lead singers, so we found interesting ways to play with leads, as well as duets and group choral numbers. I’ve never seen a band do anything quite like this, but I love the result.

Also, recording in Muscle Shoals meant we had some true legends play on the album with us, like David Hood, who played with Etta James and the Rolling Stones and Wilson Pickett. See? This is one of those “WTF” rooms I’m talking about!

BGN: When you have downtime from show business, what do you like to enjoy while relaxing?

TN: Adventure of all kinds. I leave L.A. every chance I can get. Ever since I was a kid, I’ve loved nature and being outdoors. I grew up on a small horse ranch in northern California, so when I’m not booked on a job or have auditions coming up, I drive to the desert and camp, or up to the cliffs of Big Sur, or up to the Pacific Crest Trail in the Angeles National Forest. I love camping and hiking because I hate spending money on anything I can’t eat or wear.

BGN: How did you overcome your fears of following your dreams?

TN: What fears? [Smiles] Nah, basically, I love this and I’m not good at anything else. I’m also a very decisive person, so in college, I pretty much said, “I chose this, my parents are supportive, I’m doing it.” I’m a follow-through person and I’m following this through until it doesn’t make sense anymore.

BGN: What is your insight on being a single, solo black woman traveler? How can one do it without breaking the bank, what are the must-see places to visit, and what are safety concerns to consider?

TN: For clarity, I am in fact married but often travel solo, as our work periods don’t always align perfectly for us to travel together. I love traveling solo. It’s a completely different feeling than being with friends or a loved one, and I find it’s really valuable for my mental health. It allows me to see outside of myself and my day to day problems. Being by myself sometimes gets me access two people wouldn’t have — whether it’s new friends who want to take you on a motorbike tour on the back of their bike or meeting a mom and daughter on a hike through Portugal and having them invite you to share their hotel with them.

I have lots of budget-friendly tips, some of which are not for everyone. The biggest thing I can recommend is to be flexible with your sleeping arrangements. Dorm beds in hostels are my favorites. Hostels are not scary or dangerous — the worst thing they might be is noisy. Do your research and find ones that aren’t “party hostels” and you’ll be golden.

I’ve also stayed in a shrine in Japan, a mountain hut in France, a tent in Panama, and I just got back from two weeks in Iceland, where I slept in a campervan every night, then woke up and drove my little mini home to a new spot each day.

Lately, my favorite destinations have been Japan and Iceland. But you have to be really creative to make them affordable. My favorite budget option is the cute college town of Cuenca, Ecuador. There are great cafes, beautiful skies, incredible Andes hiking nearby, and lunch will cost you $2.

As far as safety, use the same precautions you would use visiting a new place in the U.S. Don’t tell strangers where you’re staying. Don’t flash money around in public. Wash your hands a lot and only eat at street food stalls with a line of customers in front of it. And don’t be a jerk. Americans have a bad rap right now, so I like to get out there and show people we aren’t all xenophobic lunatics.

For more about Tawny Newsome Tawesomeness follow her on her social media sites: