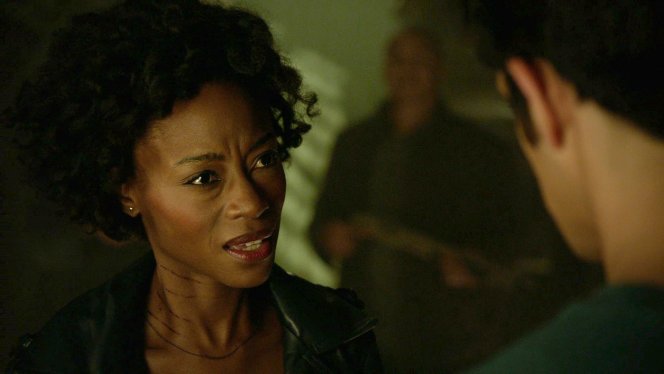 Scott’s pack is exposed. The world knows that they are supernatural beings and they are afraid of them, but rather than running and hiding, they’re fighting back. In fact, they’re actively hunting them. This is a problem because not all supernatural beings in Beacon Hills are bad, but if the humans are hunting the good ones, they won’t be there to protect them from the not so good ones. Fear doesn’t really care about semantics, though. And, it all seems to be tied to the shape shifter in the morgue.

Interestingly, we have a storyline that deals with prejudices towards someone who’s different. At school, the lacrosse team comes together to force Liam to change into a werewolf by beating him up. It’s a childish notion with the goal of alienating him. On the other hand, you have Gerard creating an army to rid the town of the people who are different. This xenophobia shows itself in two different ways. Both ways are ultimately destroying a town that is a beacon for the supernatural.

In the midst of it all, the fear persists. It’s almost palpable.

It feels oddly familiar watching Scott and Lydia try to negotiate the acceptance of their humanity with people who have decided that they’re not human enough to live. It’s also interesting watching the class shut Liam out. They’re willing to fail the day’s lab rather than work with someone they think isn’t human.

There’s so much to unpack here. This group of kids, who have only heard that Liam is different, is willing to make an F in a class rather than work with him. There are some notable parallels with real life in this situation.

In the case of Tamora and her anger, we finally learn more about her back story. She survived an encounter with one of the big bads that has torn the town into pieces — The Beast of Gévaudan. She’s angry because Scott and his pack didn’t look for her, but she was found by Sheriff Stilinski. Scott and his pack were still fighting the Beast of Gévaudan. But she doesn’t know about that. She’s decided that all supernatural beings are evil. In this case, her anger is completely understandable. Her fear makes sense. It’s connected to a real event. This event has shaped how she interacts with all supernatural beings — even the ones she advises at school.

Watching Liam get beaten up by the lacrosse team was tough. When the teacher didn’t intervene, it felt oddly symbolic. She didn’t instigate the abuse, but she didn’t stop it either.

It took Coach coming in to stop the beating. I’m sure he’s heard the rumors too, but he chooses to do the right thing. In that moment, he’s an ally.

But the fight isn’t over. Now, Tamora is completely weaponized. She is the unofficial spokesperson of the cause against the supernatural beings. When a cause has a spokesperson, it’s much easier to mobilize people around that cause. Tamora is the puppet that Gerard needs and the voice that the mob wants to justify their behavior.

But the supernatural beings aren’t down. This is a problem that they may have to deal with in a few different ways. In spite of their best efforts at peace, they’re at war. The war is coming on multiple fronts.

The werewolves from Satomi’s pack fought back and Tamora’s mob continues to attack even after agreeing not to. This isn’t going to be an honorable war. It’s guerilla warfare with a supernatural catalyst that’s steeped in fear.

Ultimately, I’m glad Scott decided to play chess rather than checkers. Tamora’s mob is only concerned with eradication. Their strategy is to get rid of the supernatural beings. They successfully eradicated Satomi’s pack. They successfully got Scott and his pack to leave town. They think they’ve won. They’re only fighting half of the battle. The fear shapeshifter is still in Beacon Hills — Nolan is one.