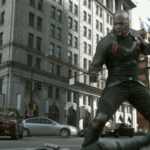 Also known as Jesse Aaronson, Bedlam can create and project a bio-EM field. This mutant power has the effect of temporarily disabling any similarly powered technology in proximity. He can also utilize his power to scan the environment for other pre-existing energy fields. In the comics, Domino (played by Zazie Beetz) and Jesse have a pretty close relationship and she helps him track down information on the whereabouts of his family. Sadly Jesse was orphaned at the age of 5 after his parents were killed in a crash and were raised by foster parents.

Bedlam is also skilled in covert ops and intelligence gathering such as computer hacking.