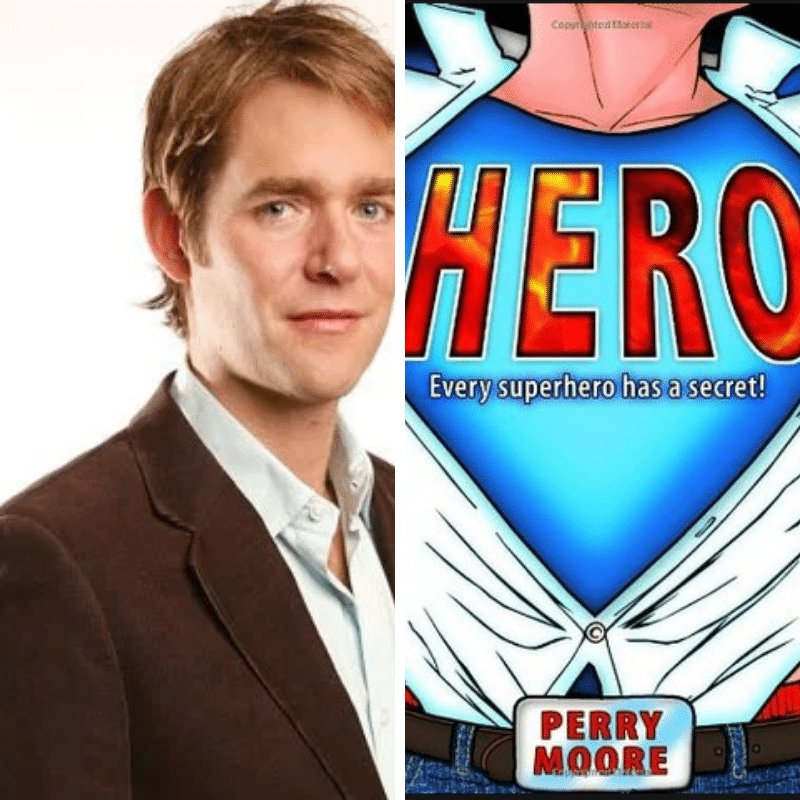 You should never meet your heroes.

While there is a lot of wisdom in that warning, I’d add that if your heroes are certifiable superheroes themselves, then a chance encounter can often lead to something very magical. I know this from firsthand experience. That’s how I met my friend, mentor, and Patronus, the late Perry Moore.

William Perry Moore IV (1971–2011) was an author, screenwriter, producer, and film director. Best known for his work as an executive producer for the Chronicles of Narnia trilogy, the Richmond, Virginia, native was also the author of the award-winning YA novel, Hero, a coming of age dramedy about a gay teenage superhero.

An openly gay man who lived and worked with his partner (writer Hunter Hill), Perry was also a devout Christian and very vocal about his faith. In his role as an unapologetic gay Christian executive producer for one of the biggest Christian-themed fantasy movie franchises, Perry’s mere existence was a revolutionary act. Said existence sparked much discussion and debate in both religious and mainstream circles, similar to how presidential hopeful and fellow gay Christian Pete Buttigieg is igniting much debate (and cognitive dissonance among conservatives) in the current presidential primary. 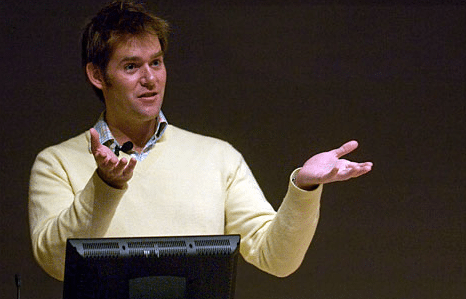 Like Buttigieg, Perry allowed his actions to reflect his faith. He campaigned for LGBTQ equality and fought against injustice. To be a minority, even as a successful privileged white male, and speak out against systemic oppression means to make yourself a target. Perry understood this and still fought for progress.

“The scariest thing in the world is to be told not to speak up,” Perry once told me (see linked Drops of Crimson interview below from 2011). “In college, I took a class on Nazi propaganda, and it’s amazing to see some of the same situations going on now [referring to the political situation at that time]. Hitler was only elected by a third of the vote, and he did that by shaming people for speaking out.”

And speak out Perry did. Case in point, his 2010 “controversial” piece entitled Who Cares About The Death Of A Gay Superhero Anyway?: A History of Gays In Comic Books. Written in the spirit of Gail Simone’s 1999 essay Women in Refrigerators, which shed light on the misogynistic inhumane treatment of female characters as plot devices in comics, Perry wrote the essay to bring awareness to the denigrating portrayals and the disproportionate atrocities that LGBTQ characters also faced in the medium: torture, rape, disembowelment, and gay characters being retconned to heterosexuals. The piece resulted in dialogue and some reform in the comic book industry.

“I think as long as you have an industry that’s predominantly run by heterosexual, Caucasian males, you’re not going to see much representation for gays or, for that matter, other minorities in general,” Perry said in 2011.

The desire to tell an uplifting, positive and honest gay superhero narrative is what led to Perry writing Hero. (Excerpt from the 2011 Drops of Crimson interview linked below.)

Thom Creed is a high school basketball star. His mother abandoned the family, and his father is a former masked crime fighter who retired in disgrace following a national incident and now works as a lowly worker in a factory. Thom’s own superpowers are beginning to manifest themselves, as is his homosexuality. But Thom must keep his powers a secret, for fear of further disgracing his father and risking his hometown’s homophobic wrath.

But as Thom’s sexuality becomes more troublesome, he decides to run away from home. He immediately becomes mixed up in a battle between some villains and the League, and he does well enough to be invited to try out for the team. Thom is accepted as a trainee and assigned to work with a group of other probationary heroes. The stress of keeping so many secrets from his father exacts a painful toll. Soon, however, the world’s superheroes begin dying under mysterious circumstances. In order to solve the mystery, Thom must reunite with his fellow outcast trainees and deal as well with society’s prejudices when his secrets are revealed. 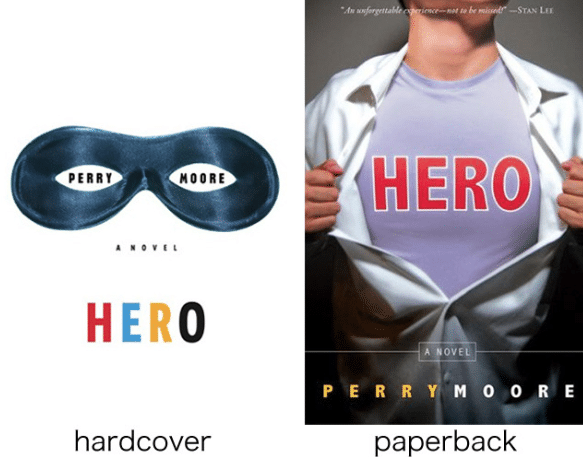 Perry’s brilliant masterstroke in penning Hero is that he didn’t write a gay story about a gay character for a gay audience. He wrote a universal narrative about a compelling superhero who happened to be gay for a universal audience. He shared a story that proved that being LGBTQ is not a tragedy. Gay people (such as myself) are more than capable of having epic adventures and happy endings (not unlike another animated gem starring a gay superhero that was released last year.)

Sexual orientation wasn’t the only theme explored in Perry’s YA novel. From healthcare to racism, war, poverty, and adolescence, Perry effectively handled heavy subject matter through interspersing lighthearted prose so as to not come across as preachy. The novel’s social commentary is akin to Octavia Butler’s style, who, along with C.S. Lewis, Perry credited as literary influences.

Wanting to signal boost quality media for other LGBTQs, I was all too happy to write a book review of Hero for Drops of Crimson, an ezine I was contributing to at the time. Because Drops of Crimson was a new site with a modest readership, I never expected my review to make any waves. So one can imagine my shock when I received an email from my editor to inform me that Perry had contacted her. Not only did he love the review and stated it was the most insightful analysis he had read to date, he wanted to know if I’d be interested in interviewing him.  Once I recovered from fainting, I eagerly agreed to do it.

Prior to the interview, Perry provided me with Gail Simone’s contact information to get a quote for a character reference. (By the by, contacting one of your all-time favorite writers to ask her to say a few kind words for one of your other all-time favorite writers for an article you’re writing is as surreal as it sounds.) Thankfully, Gail was more than happy to oblige.

“In any creative field, nothing worthwhile is created without passion, and Perry Moore has more passion for what he creates and believes in than anyone I know,” she stated. “Fortunately, he has the talent to back it up.”

(While that was my first interaction with Gail, it wouldn’t be my last. Not by a long shot. In addition to being one of my favorite writers, I’m also honored to call Gail family.)

The interview itself, in 2011 with Perry for Drops of Crimson, was a huge success and one of my all time favorites. Interestingly enough, Perry and I kept in touch. He’d keep me up to date on his projects, offer encouragement for me in the pursuit of getting my debut novel, Hollowstone, published, and, of course, we’d talk comics. Perry continued to be a friend, mentor, and a source of hope, light, and inspiration. But life doesn’t always take those things into account.

On February 17, 2011, Moore passed away. He was survived by his partner Hunter Hill, his parents, family, and loved ones, and legions of fans. His death struck me to the core. I was in a dark place which would only get darker when another hero of mine, Dwayne McDuffie, passed away four days later. Losing both of these extraordinary gentlemen devastated me. Eventually, I pulled myself out of the black hole of despair by heeding some sage advice from family: to honor their memories by fighting in their names and continuing the work they began. That became my solemn vow. Later that year, my debut novel Hollowstone was published. I listed Perry in the acknowledgments. Perry’s time here on Earth may have been brief, but his legacy continues to have an impact today.

One essay helped spark reform in the comic book industry. One novel touched the hearts and minds of countless lives. One book review resulted in a friendship and a special bond with a personal superhero. To paraphrase Kara Danvers, “The pen is mightier than the sword — and maybe even a cape.” Perry taught me that one person, one act, can do the impossible and change the world. As Charles Gunn once stated:

The final score can’t be rigged. I don’t care how many players you grease, that last shot always comes up a question mark. But here’s the thing — you never know when you’re taking it. It could be when you’re duking it out with the Legion of Doom, or just crossing the street deciding where to have brunch. So you just treat it all like it was up to you — the world in the balance — ’cause you never know when it is.

Rest in power, Perry. Thank you, and God bless.