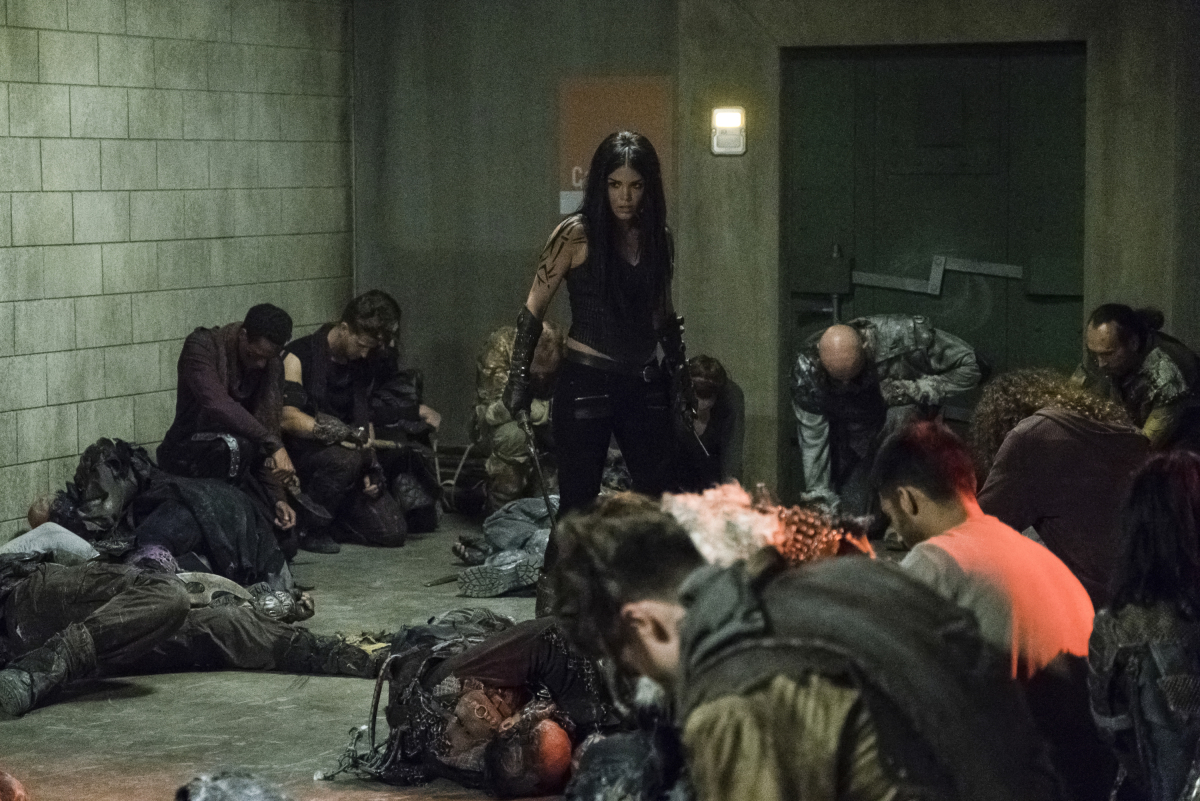 The 100 is falling back to earth and onto our TV screens in just five days! Ever since the promo cycle for Season 5 started, it’s felt like the end of The Wiz for fans of the post-apocalyptic drama. Can you feel the brand new day? Previously, we took a deep dive into all the information and spoilers coming from various sources. Now we’re about to do a not-quite-as-deep dive into five things we learned from the first four episodes of Season 5.

The 100 generally looks different from season to season, and while previous years looked great, Season 5 features moodier lighting and a rich depth of color with some truly stunning locations. It looks cinematic in some parts but honestly, it looks more like a graphic novel come to life. There are big beautiful open spaces bursting with colors we’ve rarely seen on the show. Desolate crane shots of the rover traversing a dead wood give way to scrupulously framed images of Clarke, the only woman on earth, battling the elements with steely resolve.

The transitions are especially well thought out and timed. There is a lot of ground to cover and the camera movement and editing seem to know when to glide seamlessly to the next scene or move at a frenetic pace. The first shot of the premiere, “Eden” is the camera leisurely gliding through the ring then swooping down and picking up speed until it reaches Clarke toiling away on the ground below. The transition from the penultimate scene in the episode to the final shot plays particularly well and twists with delicious irony.

The CGI of some of the Earth-based landscapes can get a wee bit dodgy, but as has usually been the case with this show, the space sequences are brilliantly slick. While some scenes in the bunker and aboard Diyoza’s ship are a little darker than I’d like, I suspect that once I see them on the larger screen of my TV, it won’t be as much of a factor.

Despite the sizable time jump, season 5 is still very much a continuation of the story we know and love. I can be honest now and say I was worried about that. I didn’t want things to be too jarring, but I also wanted the passage of time to be felt. The writers accomplished that for the most part. It’s clear that they understood the task ahead of them, so they made smart choices to accomplish it in a meaningful way.

Continuing with the graphic novel theme, Episodes 1 & 2, “Eden” and “The Red Queen” are effectively origin stories. Clarke and Octavis’s journeys needed to be plotted with more detail than some of the other main characters because the two young women we left in “Praimfaya” have been fundamentally changed by their circumstances. Neither are the idealistic teenagers who were saddled with far too much responsibility 6 years ago, and The 100 shows you why. Explicitly.

The stronger of the two is “The Red Queen” in my opinion because everything just snics into place. The references used don’t start after “Praimfaya” but reach back into Octavia’s life on the Ark, gathering every part of what makes her who she is to that point. When she led the chant of “Ogeda” (Together) at the post-enclave wrap-up and when she gave her frank but rousing speech just as praimfaya was rending the world above them, I had such high hopes for this new society led by this warrior girl who was truly a butterfly chasing idealist at heart. We know now that my hopes were naive at best, and laughable when considering I’ve been watching this show for years and should know what’s up by now. No amount of sweet words or good intentions was going erase the brutality that had become such a staple in Octavia Blake’s life.

Isaiah Washington as Thelonius Jaha is a revelation in this episode, directly stating a thematic reality this show has addressed in various ways throughout its run. I can’t say enough good things about this episode (which I feel might be a problem when I finally have to write the review). I caused a bit of a stir on Twitter when I chose to get fancy with my praise.

omg! y'all That was NOT a #Bellarke statement. (I shoulda used another metaphor huh?) Translation: I REALLY LIKED EPISODE 502 #The100 (Please RT this one too @JRothenbergTV lol)

“Eden” is phenomenal as well. Somehow it feels like they TARDISed a 2-hour movie into the 43-minute runtime. There are so many great moments that I’d love to talk about but are too explicit for a spoiler-free preview. Luckily the premiere and review are coming in a mere 5 days. At one point, Clarke makes a statement that indicates a stark change in attitude based on her circumstances. It’s either an internal thought or an epiphany she’s sharing with Bellamy during one of her calls, but it informs everything we see from then on.

Because Eliza is the star, we have so many different examples of Clarke formulating what is important to her, how she thinks, and ways she’s been influenced to change her views. In Season 2 we watched in real time as she lost her idealism and forsook love, calling it weakness. We watched in Season 3 when love drove so many of her actions. And we watched in Season 4 where she was once again torn between love and a brutal pragmatism, finally landing on love with her courageous self-sacrifice that allowed spacekru to survive.  “Eden” and the other episodes of season 5 so far are an extension of that tension.

Incidentally, in “Eden”* the story of Clarke and Octavia is foreshadowed in a clever way using Madi as a bridge.

The 100 writers project the characters into the future in believable ways but also in ways that resonate.  For instance, Emori was a girl used to being cast out and abused because of her mutation. This created in her a forbidding, individualistic outlook on life. But it also created a craving for being valued and loved. This was first established with her and Murphy’s romance. Later, she watches Clarke sacrifice her own life for her twice. So when the Get the Hell Outta Dodge Express is ready to blast off, a panicked Emori doesn’t have a snide self-interested remark on deck, she’s incredulous that they have to leave Clarke behind. She was already changing. Given a loving family to belong to for six years, the Emori that we see at the start of the 5th Season has evolved into exactly what you’d expect her to become.

Conversely, there are some characters where I need to see a few flashbacks to understand them again. This is true of Nathan Miller and Eric Jackson. This is not a critique. I fully expect to get what I need from the narrative and I was more pleasantly intrigued than anything.

Bob has been teasing in interviews that Bellamy thinks more deeply, and that’s clear. His nurturing nature that we saw in Season 1’s “His Sister’s Keeper” has been in full deployment for six years. I suspect that we won’t truly see how different he is until he’s pushed all the way up against a wall.

While the bunker and Earth stories need a great deal of setup, the ring segments have all kinds of shorthand. With a few allusions, a bit of witty banter, and small displays of physical ease with each other, they are able to communicate so much to the audience. Think about it, besides bad food, Bellamy’s hankering to get down to Octavia, and just the day to day maintenance of living on Go Sci, they’ve pretty much spent the last 6 years in a placid coed dorm becoming a family unit. The meal scene from the trailer and previews gives us a window into character dynamics. And when they embark on a little mission together, they do so with implicit trust and camaraderie. All of this makes them perfect to be secondary catalysts in getting the story of season 5 up and running.

The Eligius story is mysterious but you can tell it’s complex and almost certainly crafted to have you conflicted by midseason, talking about, “Well, I know they’re attacking all the characters I love but I see where they’re coming from…” The Eligius miners are playing a high stakes game, the severity of which is made clear in the fourth episode, “Pandora’s Box.” Make sure you pay close attention when they talk amongst each other on the bridge of their ship. There is a ton of data to be mined amongst the ideological conflicts and general “Wow, I hate you so f*cking much I can taste it,”-ness of them. Diyoza falls under the Dante Wallace school of The 100 antagonists, ruthless but not heartless. As Richard Harmon has said in interviews  McCreary is almost a future projection of Murphy if he never bothered to keep his demons in check. Lastly, there’s Shaw, ye of good sense, a semblance of morality, and swoon-worthy handsomeness.

It may seem like a small thing, but the choice not to go HAM with the makeovers actually helps with the storytelling of The 100. If this were a flashforward they could have gone nuts, secure in the knowledge everyone would be reset by the end of an episode. This is the new reality of the show so striking the correct balance was key.

On one end of the spectrum, you have Bellamy and Clarke. They have been aged up most noticeably. On the other end, you have Raven* and Emori who pretty much look the same. A few haircuts, or in the cases of Indra and Kane, grow-outs have most everyone else falling somewhere in the middle. Being strategic with the makeovers allows them to visually queue the passage of time without breaking the continuing gaze.

*-An earlier version of this article attributed this to “Sleeping Giants”