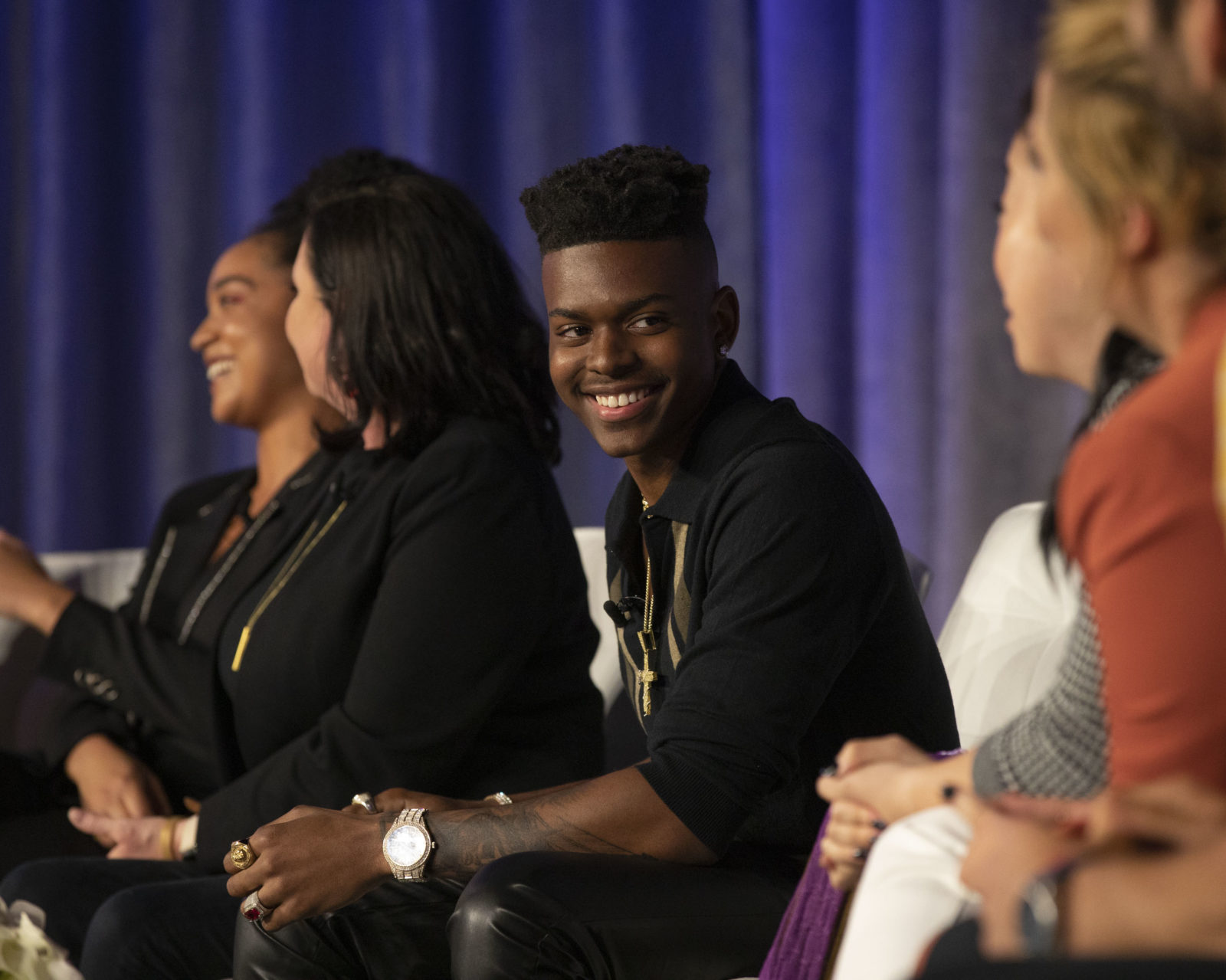 This past Wednesday, Freeform had its 2nd Annual Freeform Summit, ingeniously themed as “The UnPageant” (a reimagined beauty pageant).

The event included four different panel discussions and three musical performances. The summit focused on the main idea of “A Stage for Everyone,” and the discussions couldn’t have been more on target. Freeform’s aim was to revolutionize the concept of a beauty pageant and redefine the status quo. The panels delivered honest and real conversations.

The event started with a musical performance from Sofia Carson. Best known for her role as Evie in Disney’s Descendants franchise, Sofia can now be seen on Freeform’s newest show, Pretty Little Liars: The Perfectionists. She sounded great and looked fabulous in her white floor-length gown. She sang a slowed-down piano version of her hit song Back to Beautiful, which really channeled the theme of the night.

The first panel presented was titled, “Young Adults Keep Ruining Everything.” From movements to challenging gender norms and diversifying the media business, millennials have made a place in the world as innovators, thought leaders, and changemakers. Although a love for avocado toast, weekend brunch, and social media distractions sometimes overshadow, young adults are reshaping industries and using their platforms to fight for what they believe.

Conversations about redefining the status quo in television, sexuality, art, and fashion were moderated by Nischelle Turner, a correspondent for Entertainment Tonight. Nischelle was very excited to moderate, even if she is not a millennial, but “millennial’s mama”. She started the discussion by saying, “When I think of Freeform, I think about the future.” The panel included Kenya Barris (executive producer, Grown-ish, Black-ish), Luka Sabbat (Grown-ish), Patrisse Khan-Cullors (co-founder, Black Lives Matter), Gigi Gorgeous (advocate), Maia Mitchell (Good Trouble), Katie Stevens (The Bold Type), Smanatha Fishbein (co-founder, Betches Media), and Hillary Kerr (chief content officer, Clique Brands). Personal stories and anecdotes were shared on how today disrupting isn’t a bad thing, but a necessary thing. Disruptions become movements that get people to think and hopefully change the direction the United States is going as a country.

“Challenge this country in particular, but we argue, the world, to confront antiblackness.”

The first panel was followed up by a rap performance from Diggy Simmons. It was announced that Diggy’s character Doug will now be a series regular on the show Grown-ish. During the brief intermission, Diggy got the crowd hyped during his song. This is not a surprise when you think about the fact that his father is Rev. Run. It was a great performance that gave a boost of energy to move everyone along to the next panel.

The second panel presented was titled, “Be Whoever the FF You Want.” FF of course meaning FreeForm, but also a play on literally being whoever the F you want. This slogan was coined as the ideology of the night. Stereotypes and expectations are not what 2019 is supposed to be about. The moderator, Jessica Radloff, West Coast editor of Glamour magazine, started the discussion by saying, “Thank God we have panels and events like this. I only wish growing up that I had this kind of an event for myself.” The people presented in this panel, the audience learned, don’t give two F’s about what others are saying about them and how they should act.

With their powerful presence and continuously challenging of the status quo, the panel consisted of I. Marlene King (executive producer, Pretty Little Liars), Francia Raisa (Grown-ish), Nyle DiMarco (model, activist), Aisha Dee (The Bold Type), Emma Hunton (Good Trouble), Sherry Cola (Good Trouble), Aubrey Joesph (Marvel’s Cloak & Dagger), and Leyna Bloom (model, activist). The panel proceeded to discuss how everyone can all find the confidence to fight for what they deserve and believe in. What really stood out was Francia’s response to people telling her she shouldn’t promote her heritage as much on auditions. People told her she wouldn’t get hired. She didn’t listen and embraces being who she wanted to be.

“If you wear what you want to wear and be who you are, someone’s going to say, ‘Wow, how are they brave enough to do that? I want to be that person.’ Then they start doing that. Then the next person. All of us are here representing ourselves because people are watching us saying we’re brave enough, and it’s a domino effect. So, yes, we can be whoever the FF we want to be.”

The third panel presented was titled, “Why Won’t You Date Me? Attraction vs. Implicit Bias, On and Off Screen.” Did you know that Black women are more likely than any other demographic to be rejected on a dating app? Did you know that Asian men are less than 1% of heartthrobs cast on the big screen? Did you know that representation for transgender and bisexual relationships is even lower?

These are the types of concerns that fueled the panel discussion moderated by Tre’vell Anderson, director of culture and entertainment at Out Magazine. The panel included Diggy Simmons (Grown-ish), E.J. Johnson (TV personality, LGBTQ activist), Shaun Ross (supermodel), Patrick Starrr (beauty guru, YouTube personality), Billie Lee (activist), Zuri Adele (Good Trouble), Dhruv Uday Singh (Good Trouble), and Lala Milan (actor, comedian). The conversation started with a hell of a speech from Zuri. She commented on her own feelings about where we in society right now.

“Those who don’t pass the brown-paper-bag test have been overlooked. Magazines have a standard of beauty [that they’ve] put in our brains to be so opposite of what we look like. It’s been so deeply ingrained into our own culture. It changes how we even see ourselves.”

Before the audience heard from the last panel of the night, we were given a special performance by Trevor Jackson from Grown-ish. We swear something is in the water over there with the Grown-ish cast. They are all so talented. Trevor performed two songs, one that included a cover of Ed Sheeran’s “Perfect.” Pretty sure the crowd swooned. But he wasn’t done yet. After the smooth ballad, Trevor and friends graced us with some amazing dance moves. The crowd went crazy. Snapchats went up. Instagram stories blossomed. It was a blast!

The fourth and final panel was titled, “A Stage for Everyone — What ‘The UnPageant’ Means to the Future of Representation.” It was moderated by senior entertainment editor for Nylon, Sesali Bowen. The panel centered on the rebellion of unrealistic standards of beauty, race, sex, gender exclusion, and patriarchy. People are over being judged based on their performance of traditional “femininity.” Through fashion, storytelling, and activism, the panelists are paving the way for more inclusive representation. The panelists included Sasha Pieterse (Pretty Little Liars), Eliot Laurence (executive producer, Claws), Joanna Johnson (executive producer, Good Trouble), Josh Thomas (Everything’s Gonna Be Okay), Kayla Cromer (Everything’s Gonna Be Okay), Avie Acosta (model), Geena Rocero (producer, model), and Dexter Mayfield (performer). This was a fantastic group that came together to end the night. There was also a special moment with Kayla Cromer, who plays an autistic character Matilda on Everything’s Gonna Be Okay;

“I have learned to trust the journey. This event is the perfect place for me to come out publicly for the first time that I’m actually on the autism spectrum.”

This was truly the best way to end the night. Being able to speak your truth in front of a group of total strangers that you understand will not judge you has to be the best feeling in the world. Thank you, Freeform, for providing this platform.

It was amazing to hear different stories, points of view, and kindred spirits all in one room. There was laughing. There was crying. Most of all, there was understanding. Compassion swept through the room, reminding us that these stories need to be told and Freeform is all about it. Waves are being made, and it feels good.