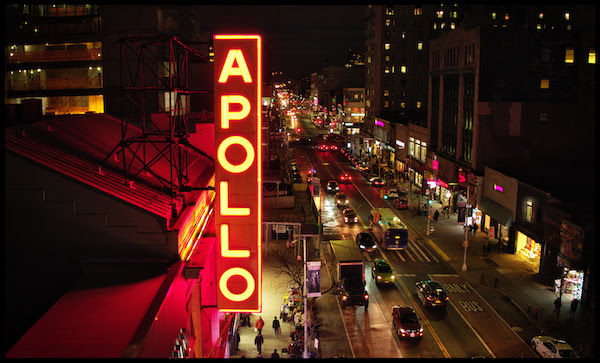 An Exploration Of The Unique History And Contemporary Legacy in The Apollo Theater.

The Apollo, directed by Oscar and Emmy winner Roger Ross Williams, chronicles the legacy of New York City’s landmark Apollo Theater, covering the rich history of the storied performance space over its 85 years. What began as a refuge for marginalized artists emerged as a hallowed hall of black excellence and empowerment. In the film, Williams reflects on the struggle of black lives in America, the role that art plays in that struggle, and the part the Apollo Theater continues to play in the cultural conversation.

Weaving together archival footage of music, comedy and dance performances with behind-the-scenes verité footage of the team that makes the theater run, the film features interviews with such artists as Angela Bassett, Common, Jamie Foxx, Doug E. Fresh, Savion Glover, Patti LaBelle, Paul McCartney, Smokey Robinson, and Pharrell Williams. Parallel to the historical narrative, The Apollo examines the current state of race in America, chronicling the multimedia stage adaptation of Ta-Nehisi Coates’ acclaimed Between the World and Me as it comes together on the theater’s grand stage.

Williams brings a kaleidoscope of voices together to tell the story of The Apollo, including members of the Harlem community, beloved audience devotees such as Eva Isaac and behind-the-scenes notables including in-house historian/tour guide Billy Mitchell, who has worked at the theater for more than 50 years and is now affectionately known as “Mr. Apollo.” THE APOLLO features insights from prominent journalists, historians and others including: journalist Herb Boyd, writer Ta-Nehisi Coates, and cultural historian Farah Griffin; Apollo Theater President & CEO Jonelle Procope, Apollo Theater Executive Producer Kamilah Forbes, Apollo Theater Chairman of the Board Richard Parsons, former owner Bobby Schiffman; and former Congressman Charles Rangel.

The rich history of The Apollo’s renowned “Amateur Night”, a tradition created by producer Ralph Cooper dating back to 1930s, is also explored. With its discerning audience known for booing subpar acts, Amateur Night has been paving ground for many performers and to this day, people travel from all over the country to audition.

The film recounts more difficult times in the life of the Apollo such as when the theater went into bankruptcy during the 70’s. But in 1983, the theater was bought by civil rights attorney Percy Sutton, who eventually made an arrangement with the state to create a foundation and establish The Apollo as a New York City landmark. Though the building and its ownership have evolved over the years, the cultural vibrance and symbolic connotations remain consistent and grounded.

A digital edition of THE APOLLO: Original Motion Picture Soundtrack will be released by Universal Music Group/Blue Note Records/Polygram Entertainment/Universal Music Enterprises on Nov. 1, and the soundtrack’s CD and 2LP vinyl editions, featuring liner notes written by Roger Ross Williams, will be released on December 20. The soundtrack also debuts a new original song, “Don’t Turn Back Now” by Robert Glasper with vocals by Ledisi, plus selections from Glasper’s original score for the film.