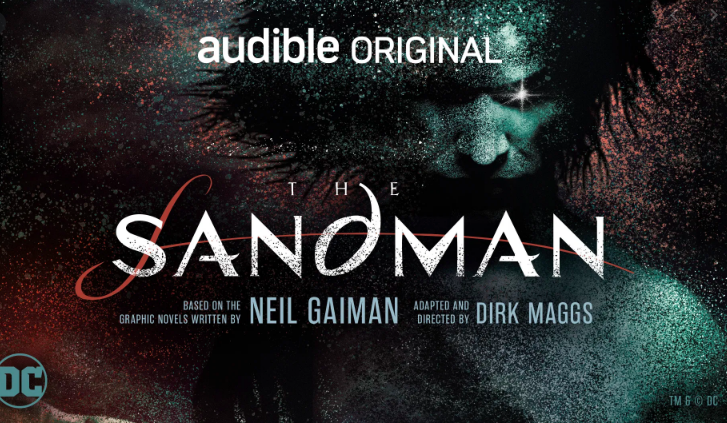 Get filmmaker and comic book-creator nerd Kevin Smith in a space with British writer/creator Neil Gaiman,plus cast the and crew of the new Audible version of The Sandman, and it’s an all-out fanfest.

The Audible presentation of The Sandman has not only made the New York Times Bestseller list, but it also boasts a cast of 68 voices (including Kat Dennings, Taron Egerton, and Andy Serkis) with McAvoy as Morpheus.

Ever the fanboy, Smith doesn’t hold back on his enthusiasm. “It is breathtaking how epic this presentation of Sandman is.”

For Gaiman, so well known of late for the Amazon-produced Good Omens and for American Gods (Starz), it’s a walk down memory lane. He originally wrote The Sandman for DC Comics in 1986, and what happened next was a stroke of luck.

“The SandMan came from desperation but in a good way,” Gaiman recalls. “I was writing my first comic, Black Orchid, when I got a phone call from [his editor] and she said, ‘Listen, you’re doing a comic on this female character nobody’s ever heard of and we wanted to raise your profile. How about a monthly comic?’”

Gaiman gave her a list of ideas but they were all taken, so the editor suggested a Sandman redux but done differently.

“I had never done a monthly comic,” he explains.  “I was a journalist. If I was going to tell a monthly story, I needed something that would take me anywhere.”

Gaiman picked up a book of quotations to motivate his creativity. “I ran into one that said, ‘Sleep is the brother to death and suddenly it was a little door in my head opened and the light shone in.’”

Director/writer adaptor Dirk Maggs has worked with Gaiman on various projects including the 2013 production of Neverwhere for BBC Radio. Maggs has dozens of radio show adaptations, audio serialization, audio books, and directing for radio to his credit including the radio series Hitchhiker’s Guide to the Galaxy. He calls this sort of work “a sort of desperate addiction.” Continuing, he says, “Yet all of this, creating worlds without pictures and yet the pictures come in your mind, and it didn’t help at all to make friends with Neil Gaiman — in fact, he ruined my life. He’s kept me at it for 28 years before we actually go to do Sandman.”

Doing The SandMan for audio required finding the right sound for Morpheus, and James McAvoy admits he would check with Maggs on whether he was getting it right.

McAvoy describes his take on the character this way: “He’s not an everyman nor is he any man. He is his own man, and he’s putting his own man back together. He’s got to be outer, got to be other, got to be alien. But he can’t be Spock. He can’t be emotionless, he can’t be humorless. He doesn’t react the same to things that we do, and yet it’s got to be enough that we still connect with the guy.”

Hannigan played down his musical role in The Sandman by explaining that the composer has to score music that “creates a virtual set and paints pictures.” He continues, “In a drama like this, [the music] is really underpinning dialogue so I think restraint is a factor.”

Since aficionados of the series know that there’s four versions of The Sandman, Smith asked the panel about favorites.

For Gaiman, it was Merv Pumpkinhead. He says working on the comic book was a “gloriously blue collar job,” that consisted of working with staff to meet deadlines so everyone got paid and working on the audiobook as he and Maggs worked out everything from dialogue to sound to casting.

“I like Fiddler’s Green,” says Maggs. “There’s something about the idea of a dream, which is not even a person. It’s a place, but it dreams it’s a person. It goes and takes advantage of dreams to go and live a human life, and becomes this old, worldly, cuddly gentleman … I don’t know. It’s incredibly touching.”

“It’s that feeling of ducking and diving and how Neil writes him,” he says. “It’s this kind of working class element of somebody in way over their head and this whole world he never imagined he’d be in and actually managing to float but just by the skins of their teeth, and that’s how I feel a lot in my career and have, over the last 25 years.”

The Sandman is available on audible.com and on amazon.com