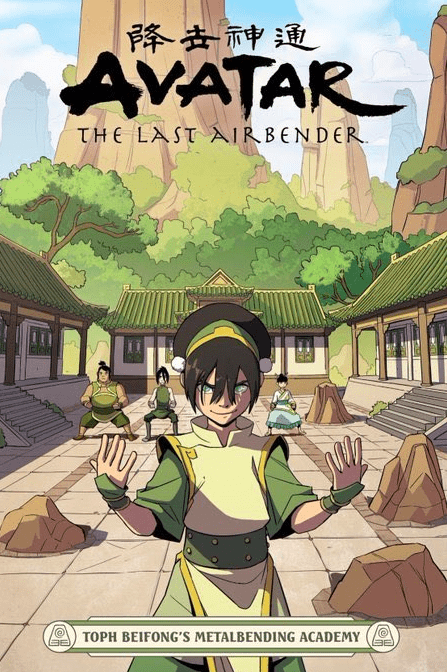 Dark Horse Comics, Abrams Books, and Nickelodeon treated fans to a panel worthy of the Avatar! BGN was able to join Avatar: The Last Airbender and The Legend of Korra creators and writers, Michael DiMartino, Faith Erin Hicks, F.C. Yee, and Gene Luen Yang for further exploration of the beloved world as it has grown and changed since the animated series has ended.

Fans were delighted to watch the most adorable nerd out session filled with Avatar writers just gushing over the show and DiMartino looking humble as they fire off compliment after compliment. If nothing else, this panel was the place for Avatar nerds to go crazy and learn more about the literary world of Avatar.

Yesterday, after the panel, the co-creator korranewsofficial dropped an announcement on Instagram that Toph will be getting her own solo graphic novel. Toph Beifong’s Metalbending Academy, is coming in February. This is the second standalone graphic novel revealed after Katara and the Pirate’s Silver by Hicks.  https://www.instagram.com/p/CDAcLA3lN4a/

There is also excitement about the new deluxe version of the ATLA artbook that features 8 brand new pages and more! It’s been out of print for years, and now they’re finally bringing it back with a deluxe second edition that includes a new cover, a slipcase, and a collectible lithograph.

Avatar: The Last Airbender — The Art of the Animated Series (Second Edition) hits the shelves on November 24th.

DiMartino started by sharing with fans that he is involved in the creation and development of each Avatar adaptation. He consulted with the writers on all comics and novels. He joked that his involvement means he’ll never be free of the Avatar universe.

He told viewers that he is amazed how much impact Avatar has had on the lives of so many people. He shared that since Avatar was added Netflix recently, he’s had his old friends message him that their kids are watching the show. While others were rewatching for 30th time and some friends, kids that are watching for the first time.

Additionally, over the years he told fans that he’s seen people have Avatar wedding themes and entire communities and friendships form from bonding over the show.

He explained that years ago, he was never a fan of creating prequels, as he never saw the point. However, he said, “we’re digging in with the comics and filling in the middle” in reference to creating a sequel to the original Avatar series and a prequel to Legend of Korra.

He also shared that it’s great to see talented creators that use their personal experiences to make the comic, novel, and graphic novel adaptations so good. He admitted that he was nervous about the prose and comics being created with no true meaning and depth behind them. He was particularly irked about there being an actual prose novel, in reference to The Rise of Kyoshi by Yee. He told audiences that he admires Yee’s ability to turn an animated series into a novel, something he couldn’t imagine doing.

The Writers Discuss Their Experiences

In this multitalented panel, fans were able to learn more about the people behind the magic of the Avatar books. Hicks wrote some of the graphic novels, Yang wrote many of the comics and Yee created the very first solo written Avata novel by himself.

Yee explained that the novel version is darker in ways that the animated series and more adult themes come up.

He had a funny story of how the novel came to be. A colleague pitched the idea for a novel adaptation and mentioned that Yee would be a great fit to write it, but Yee didn’t know about that. Yet, by the time it was approved and Yee was put on the spot to write it, he was thrilled.

“I got lucky, really lucky” he said.

Yang was asked what it was like to create the first Avatar comics. He chuckled and explained that the first comics were actually appeared in the Nickelodean comic publication that use to come out years ago. He mentioned that he used to collect them.

He also shared that having the opportunity to join the Avatar team had him freaking out. He was already such a fan and recalled asking about Zuko’s mom during on of his first conversations with Avatar creators. For him, it was amazing.

After Yang joined the team, Hicks became a quick fan of his work as well as a seasoned Avatar fan herself. The two of them became fast friends, they would meet up at comic book conventions and nerd out over Avatar before they both were writing for the series.

Hicks explained that, “getting a change to hop in the Avatar sand box was amazing.”

After accepting the job offer from Dark Horse, she had the opportunity to write Imbalance, which is a team Avatar story.

Yang and Hicks are such good friends that they even did a comic book collaboration together for the series. The two reflected on how Avatar has such a strong influence on their friendship.

Yee and Yang reflected on just how much the comics have grown the Avatar world. Yee explained that through the books, the world has kept growing.

“It’s hard to capture the extent of the show, it wasn’t like most shows on Nick. It’s so real, relatable. It has characters with flaws and feelings we experience on a daily basis,” Yang added.

He went on to explain that some of the character stories flowed so naturally that they told themselves.

Hicks added to their analysis, saying that over time, “characters grew and changed. Toph being a tough girl wasn’t something that happened in normal shows in the 90’s, neither were female leads.”

Writers share their Challenges in Adapting Animation to Book

Yang started off by explaining that’s difficult to creating bending in static print. He was grateful that they brought in a martial arts specialist to help them make the bending look as natural as possible, while also looking aesthetically pleasing on the page.

Hicks added that it’s also tricky to have certain page counts that stop her from making longer fight sequences. She had wanted to do more Shonen comic book fight sequences, but they were hard to shorten and compress.

She was also grateful for martial arts consultants for the drawing sequences. Going from screen to book was very hard for them.

However, some things translated to print quite well when it came to Yee’s novel. He explained that a new technique called “dust stepping” in the prose translated quite well.

Despite some challenges, Hicks expressed that Katara and the Pirate Silver was fun to write.

The writer’s felt that their struggles were worth it, as more fans have not only been reading the books, but also sharing new fan art inspired by them.

Even their family members are watching and reading the books more. Yang mentioned that his 4 children have gone from watching the entire series on Amazon Prime to watching it again after it was released on Netflix.

It would seem that both the animated shows and books are coming together to foster an entirely new generation of watchers and readers. The books and comics are available on Amazon and in stores.