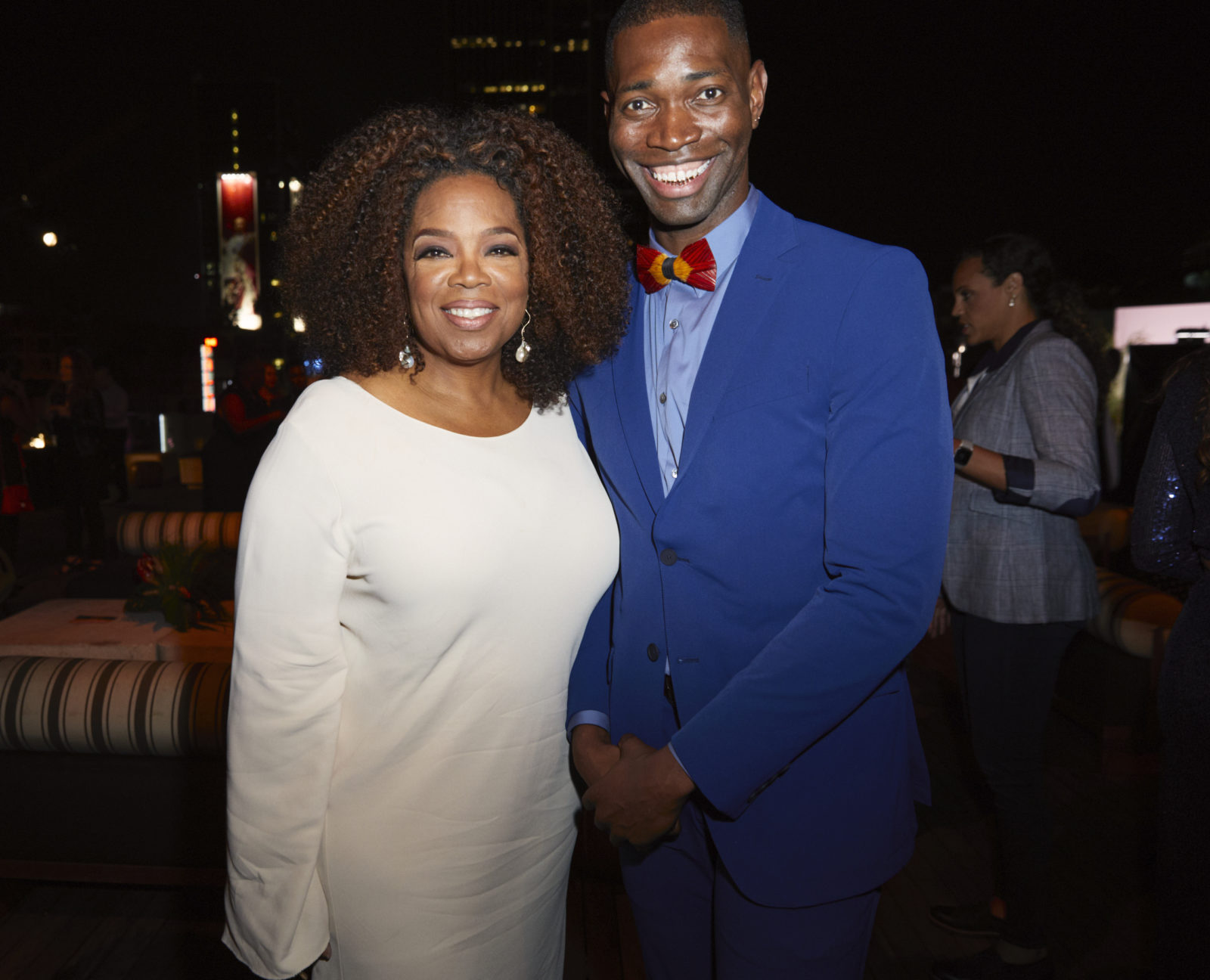 Premiering August 14th on OWN is the coming-of-age story David Makes Man from Oscar-winner Tarell Alvin McCraney and executive produced by Oprah Winfrey and Michael B. Jordan.

Best known for his work in Moonlight, David Makes Man is Tarell Alvin McCraney’s debut in television. He serves as series creator and is alongside an impressive team of executive producers that include Oprah Winfrey and Michael B. Jordan. This is the first of a series of projects that Jordan has launched under his Outlier Society production company. Dee Harris-Lawrence (Shots Fired) is the showrunner for the episodic lyrical drama, and Mike Kelley and Melissa Loy (Revenge) are producers under their Page Fright production banner.

The Oprah Winfrey Network (OWN) is telling rich nuanced stories from the Black diaspora and the media mogul says, “I’m not looking for Pollyanna stories, I’m looking for stories that say this is what life is.”

Tarell Alvin McCraney and Oprah Winfrey sat down with a small group of press to chat about the impending series and how this story was brought from a breathtaking pitch to the small screen. On the day of Toni Morrison’s passing, both share some sentiments about her legacy and how important this new series will be for viewers. A nuanced episodic narrative about the life of a 15-year-old Black boy is still an anomaly in primetime TV and the Oprah Winfrey Network is up to the task of changing that.

David (Akili McDowell) is an inquisitive teen filled with unbridled passion and tackles the dichotomy of his surroundings between living in a drug-riddled neighborhood and attending a privileged magnet school.

Tarell Alvin McCraney states that he’s been fortunate to have the legacy of Black interiority handed down to him. “It really is about trying, being able to finally see myself and get that validation of self and seeing characters, reading characters”, says McCraney. One of Toni Morrison’s literary works, Tar Baby, was a story McCraney connected with. “When I read Tar Baby, it was one of those moments where I was like, I know this Southern boy oh, I know him so bad. I know wanting after a person so wonderfully, and then to sort of turn around and see Florida life in that way that I hadn’t seen since Zora Neale Hurston, I thought to myself, that’s what I’ll do, I will engage, I will reach into my pocket in my corner of the world and show it as best I can. And so I’m grateful for that legacy.”

Oprah recalls one of her first conversations with Toni Morrison to which the illustrious author told Oprah that she always knew she was gallant. “I think what she represented for me, is this idea that where we’ve come from, and everything that came before us lives in each of us in such a way that we have a responsibility to carry it forward”.

Oprah adds that Toni’s ability to use language is what affected her and Tarell’s words impacted her in the same way. The first time Oprah heard his pitch she closed her eyes and did everything she could not to cry. “I knew that if he was able to do just a portion of what the pitch represented, that we would have something that was
would be in its own way a phenomenon”, says Oprah.

While sitting in the room during the pitch with Tarell, it dawned on Oprah that her literary world was filled with stories about little Black girls like the Pecola Breedloves of the world, but not many stories about little Black boys.  Oprah adds, “I thought that the series in the way he pitched and presented it would offer the rest of the world an opportunity to see inside a world that we rarely get to see. I believe that what he and the team have done to create is this series that validates the Black boy.”

Tarell’s pitch for Oprah was the best pitch she’s ever heard and the stars aligned in that room the moment she heard the story about David Makes Man. When God is speaking to you, He’s speaking to you all the time, and it is no coincidence that the elements of this story were something she was preparing to show on television for some time.

“I had done this piece for 60 Minutes on trauma. And everything that Tarell was talking about in the pitch about the series, felt to me that people could hear it, feel it, experience it in a way that you couldn’t hear in a news story or in a way that you couldn’t hear in a documentary. You could only feel by experiencing it through people’s lives. And I thought that David would be a perfect representative of showing people that what happened to you is more important of a question then ‘what’s wrong with you’?  One of the things I learned during the research about this trauma story, is all these kids who sit in classrooms dysregulated and they can’t control themselves, because they’re disassociated. All people raised in challenging poverty environments are traumatized to some degree. And the question is not what’s wrong with you — the question is ‘what happened to you’? So we get to see that week after week unfold in ways that remind us of ourselves.”

Oprah mentioned again while explaining the process of listening to the pitch in the meeting with her, Tarell, Michael B. Jordan and TV executives how it was difficult for her not to cry. If there’s ever a lesson in how to execute an award-winning pitch Tarell Alvin McCraney could teach a course. Oprah elaborates on what he did:

“He was revealing the story. And it was bringing all the characters to life. And I think at one point he starts singing and I felt Gloria (Alana Arenas), I felt the community he built the world and allowed us in the room to step into the world in exactly the same way that he’s now done on screen. Wow.”

Note to self: practice singing lessons to use in a future story pitch to Oprah.

Tarell adds, “when I was pitching this, I said to my therapist, I’m going to pitch this show because I think it’s good for me to like look at these moments and we walked to the room gave this pitch. And Miss Oprah said, I just did I just wrapped a session about childhood trauma amongst young girls mostly in poverty. Yeah, growing up in marginalized communities and how those carry on throughout their lives.”

And a week later Oprah hears this pitch, the story of David Makes Man was meant to come to life.

BGN interviewed the cast earlier this year at SXSW. Actor Phylicia Rashad says, in preparation for watching this show come in with an open mind and set no expectations.

She adds, “The people who want to watch the show will know what that is. I think having an open mind is really great advice for the series. If you go in with no expectation, and you just think, ‘Oh, this is a great series, and it’s Tarell McCraney’, and it’s on OWN and it’s about these young Black boys growing up, and I think you will be carried to depths of meaning and caring that are completely unexpected for you, as a viewer.”

Tarell also says, “I’ve never disagreed with Phylicia and I’m not gonna start now. I think there is other the other portion of that advice is, is to take it fully. We’ve been doing screenings and movie in theaters. And when we have when we sit folks down to watch the show, there’s something that happens in that captivated moment of I can’t get up and go wash the dishes while I do this that really settles over people. And there’s a reason for that. The show is built that way it’s built that way so that you can feel it deeply. If you get up to go get a nacho by the time you come back, in the looking at the close-up of a face there’s a depth of experience that you may miss…”

“…So the lesson there is get your nachos,” Oprah interrupts.

Follow Oprah’s advice and have your nachos ready while you prepare to dive into the experience of David Makes Man premiering August 14th on OWN TV.