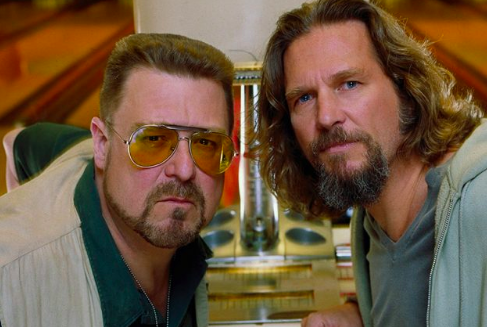 “Sometimes there’s a man, and he’s the man for that time and place,” narrates The Stranger (Sam Elliott) to open the Coen Brothers’ surrealist romp The Big Lebowski, which is celebrating its 21st birthday this year.

This weirdly Shakespearean tale of mistaken identity, nymphomania, nihilism, and ultimately friendship, with its quirky soundtrack, has become a modern and cult classic for its increasingly bizarre scenarios and snapshots into the sometimes-seedy underbelly of life in Los Angeles. The Big Lebowski is about a lot of things — a rug that really tied the room together being an important one — while simultaneously being about almost nothing at all. It’s positively Seinfeldian, but catered to the big screen with its fever dream collage of characters and the Coen Brothers’ signature dark wit.

The man The Stranger was talking about is Jeffrey “The Dude” Lebowski (Jeff Bridges), famous for doing absolutely nothing and magically getting by. If The Dude is the representative figure of early 1990s America — a lazy white guy constantly breaking the law with impunity — it’s no wonder his story remains relevant even now that the film is old enough to order its own White Russian. 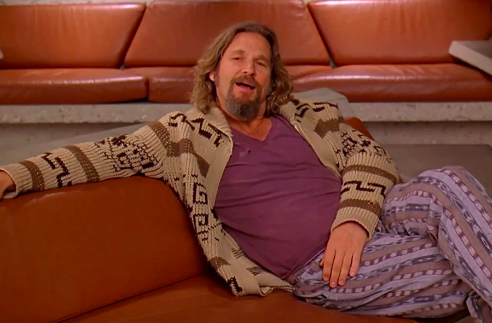 While The Big Lebowski does set up the plot with a political backdrop of the first Iraq War, Saddam Hussein, and The Dude’s friend Walter Sobchak (John Goodman) and his untreated PTSD, the movie constantly finds ways to sidestep most of the politics of that particular time and place. This ends up making the film even more political as it tries to hide behind its humor, physical comedy, and a double chaser of white privilege.

However, before we go further, a warning: I am a huge fan of The Big Lebowski, but that doesn’t mean the movie gets a pass for its problematic themes and events. If calling out troubling aspects of this film will ruin your childhood or whatever, close this tab immediately and I dunno, go smoke a bowl or something. Proceed at your own risk. And don’t say I didn’t warn you.

So. The Dude openly steals from supermarkets. He smokes pot in public places and gets away with it. After El Duderino’s car is stolen, the police come to his house and sit at his coffee table littered with marijuana buds, a pipe, and rolling papers — and he’s not arrested for possession of a narcotic. The police even let him pick up his car from the impound lot even though his only identification is a Ralph’s Club card. The Duder hasn’t paid his rent in months, but thanks to his laissez faire attitude somehow gets his landlord to cut him slack he surely doesn’t deserve for doing nothing. His Dudeness calls Asian people “Chinamen” until best buddy Walter finally encourages him to say Asian-American.

Walter, even, pulls a gun on his fellow bowling colleague for supposedly stepping over the line and receives only a virtual slap on the wrist from the bowling league about the incident. Walter’s simmering rage boils out onto every nearby person in tirades of verbal abuse, in particular with sweet and simple Donnie (Steve Buscemi) whose guilelessness makes him an easy target for Walter’s constant anger. Walter attacks a Porsche with a crowbar thinking it belongs to the boy who robbed The Dude and gets away with it. Walter is so over the top it’s easy to think he’s funny. But really, The Big Lebowski has injected a veteran’s pain into the story during a time when simultaneously new vets were being created in the Gulf. 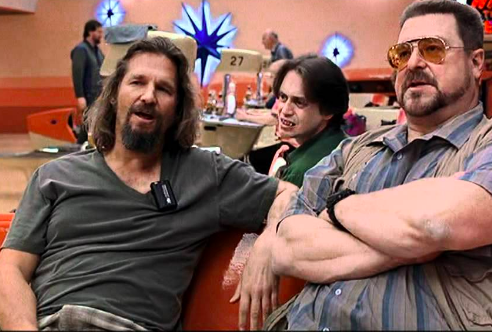 Jeffrey “The Big” Lebowski (David Huddleston) is a pretend millionaire who tries to con The Dude into covering up an imaginary kidnapping and heist. The Big Lebowski might be a philanthropist, but in the privacy of his office he’s an admitted racist. His pretentious daughter Maude (Julianne Moore) with her stilted British accent is a peak white feminist whose biggest acts of resistance are saying the word “vagina” out loud, painting vulval canvasses while naked, and choosing single motherhood. Bunny Lebowski (Tara Reid) is the teen trophy wife/sex worker whose disappearance serves as one of the catalysts of the labyrinthine narrative as well as uncomfortable moments of comedic relief. Because of his money and connections, The Big Lebowski was able to marry a teenage runaway, and nobody said boo. I couldn’t help but think of the ongoing Jeffrey Epstein pedophile and human trafficking case that flew under the radar for so long because of who he knew. White folks, rich or not, get a different set of rules. We see it again and again in The Big Lebowski.

The Nihilists (Peter Stormare, Flea, Torsten Voges, Aimee Mann) stage a fake kidnapping, cut off the toe of their female member, set The Dude’s car on fire, and attack The Dude and his friends, with Donnie having a heart attack and dying in the process. But none of them are arrested or ever held to account for those or their likely many other crimes.

Let’s contrast this buffet of white devils to Italian-American John Turturro in brownface as Jesus Quintana, one of the few characters of color in the film. Unlike the white characters who should have long rap sheets based on their crimes, Jesus is the only officially recognized criminal: he’s a registered sex offender. Yikes. The brownface in particular has not aged The Big Lebowski well, and it gets even worse with the news that the film’s sequel will find Turturro reprising his racist role as the sexually inappropriate Jesus. We’ll be entering a world of pain, indeed.

Like the film’s signature drink, whiteness is really what ties The Big Lebowski together. And yeah, that might just be, like, my opinion, man. But it sadly tracks. Along with that whiteness comes uncomfortable levels of sexism, slutshaming from a supposed feminist, racism, and rampant homophobia. To use the parlance of our times, The Big Lebowski is problematic AF.

But because it has brought us so many iconic one-liners that do hold up in positive ways, it’s really easy to overlook how disturbing this movie really is. Revisiting it this time around, it ended up reading more like a horror movie rather than something to chuckle at or escape into, as was the original intention. In particular, the dreamscapes The Dude visits every time he gets knocked out had a menacing quality to them that I’d never noticed before. And even though The Dude claims to disprove of objectifying women — about pornographer Jackie Treehorn (Ben Gazarra), The Dude says through a drug-fueled haze, “He treats objects like women, man!” — The Dude does his fair share of it throughout the movie, from his dreams to Maude to even his first meeting with Bunny Lebowski, in which she propositions him and he considers the offer. Sorry, Dude, you gross. 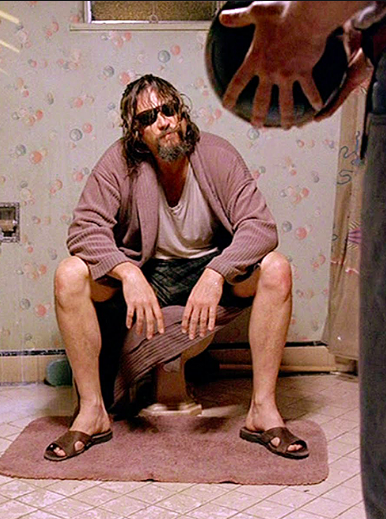 The individual parts sometimes work and retain that original charm, like with The Dude’s two encounters with The Stranger as each of these “men of their own times” stop to consider the humanity of the other. I also love the moment when Walter suddenly becomes protective and loving toward Donnie as the group is attacked by The Nihilists. It’s surprisingly sweet and tender even though the scene leads to Donnie’s death.

The Big Lebowski was supposed to be something of a time capsule that captures a very specific moment in American history and culture. But 21 years on, we still see mediocre men like The Dude — in real life and in visual media — floating along their white privilege and continuing to get ahead without doing anything, having any qualifications, or even being particularly smart. In this particular sociocultural sense, The Big Lebowski stops being a marker of the past, and instead, unfortunately, becomes an evergreen message that represents white (male) privilege in America. This suggests that, maybe for once — and especially in the context of recent white supremacist violence in El Paso and Dayton — The Dude shouldn’t abide.

Jordan Peele’s Sly Commentary on Whiteness in ‘Us’