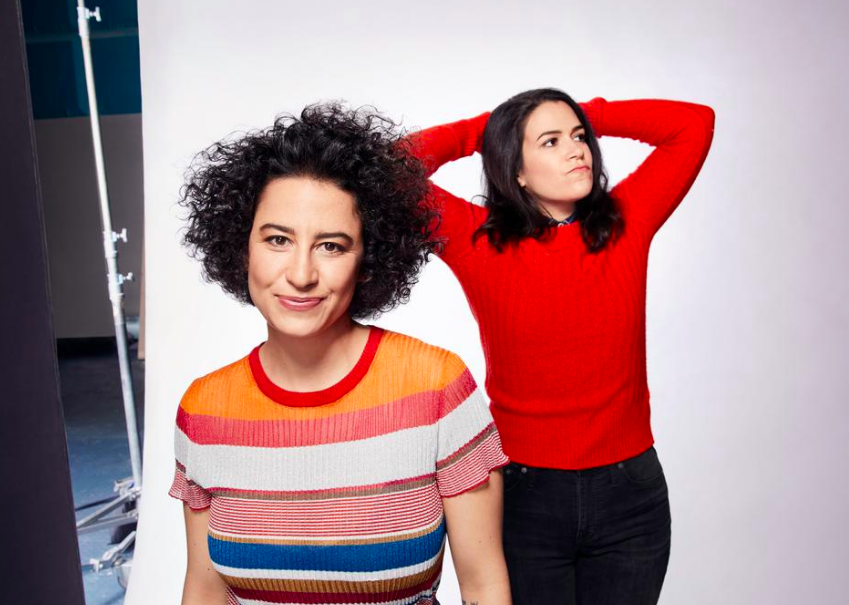 Comedy Central’s Broad City, starring Abbi (Abbi Jacobson) and Ilana (Ilana Grazer) has reached the end of its fifth-floor walk-up and that end was revealed at SXSW 2019.

Broad City began as a hit web series, where it lived online to millions of viewers from 2009 – 2011; then with a little help from a friend (Amy Poehler), Broad City was reborn again for reals on the epicenter of funny in January 2014.

Having lived, farted, breathed and sexed its way through five sometimes-raunchy, always-funny seasons, Broad City has been nominated multiple times for Critics Choice Awards, an MTV Award and several of the writers have been Writer’s Guild nominated. This half-hour series has kept it real for real girls everywhere.

In Episode 8, titled “Sleep No More”, Abbi’s got some bad news to tell her best friend, Ilana. She’s leaving New York. Like, for good. Abbi knows Ilana isn’t going to take this very well. She needs a plan. She needs a distraction. And a good one. Abbi has been accepted to an art residency in Colorado and she ends up breaking the news at Sleep No More, one of New York’s trippy, Halloween-esque, hard-to-get-into theater things and something Ilana has been stoked to do. Before Abbi can drop the Boulder bombshell, Ilana proposes with a key to her apartment, asking if Abbi will say, “I do” to being her new roommate. Abbi can’t hold it in anymore and Ilana’s frightful fury is unleashed.

It’s not just that Abbi is leaving New York. Ilana feels like Abbi is leaving her, and no matter where we are in life, this loss is something we all can relate to because being left behind sucks.

Broad City is about growing up. It’s about that post-collegiate, millennial Milky Way that is insanely hard to navigate and these two girls have done it. In New York. Together. And we’ve grown with them.

Jacobson and Glazer, creators of the show, have pumped the brakes on what has been a mad-crazy ride for five outlandish seasons. These two Jew queens have said that the series captured a certain moment in their lives, but now they’ve grown as women and their characters need to put on their big-girl panties too. So basically, they just want to keep it 100. When something’s kaput, it’s kaput.

There’s no other show that gets me laughing or crying or understands me like Broad City. No matter what they do — from not shaving armpits, to stuffing things up one’s p*ssy, to just saying “p*ssy” — I feel like I can relate to Abbi and Ilana on a basic human level that says, “We are women, hear us…roar, poop, cry, queef and run with the wolves of New York because this is what we do!”

Episode 9, “Along Came Molly” has Ilana having recovered from the devastating smash that is Boulder. This girl has chutzpah and bouncing back is just what we’d expect from our scrappy Ilana. She’s not happy about it, but like the seven stages of grief, she’s accepted her Abbi-less fate. Abbi is moving forward and is selling her “sh*t” thanks to Bevers who is the ultimate sidewalk salesman. There’s a certain something the girls can’t let go of, and of course, they find themselves in pursuit of it when it finds its way, not in their possession. There is Manhattan mad-dashery, there is girl-sweating and there is a certain substance that makes this pain all go away as they embark upon enjoying a L’il Wayne concert in a funky way only Ilana and Abbi can.

I’m not sure what I’m going to do without Abbi and Ilana, and Episode 10, so perfectly titled, “Broad City”, made that crystal clear. Just grab your tissues; Abbi and Ilana say goodbye. This one hurts, but it’s a happy hurt because we know the girls are going to be okay. Abbi is going to finally follow her art dream and Ilana is going to be Ilana. That’s the cool part. While Abbi says Ilana is her only friend, we know Ilana has this love that includes everyone and everything sometimes, and this episode gives us that hope we need that says, “Life goes on dude. Make it happen.” They both walk off into the sunset that is their own, and we’re left proudly cheering them on.