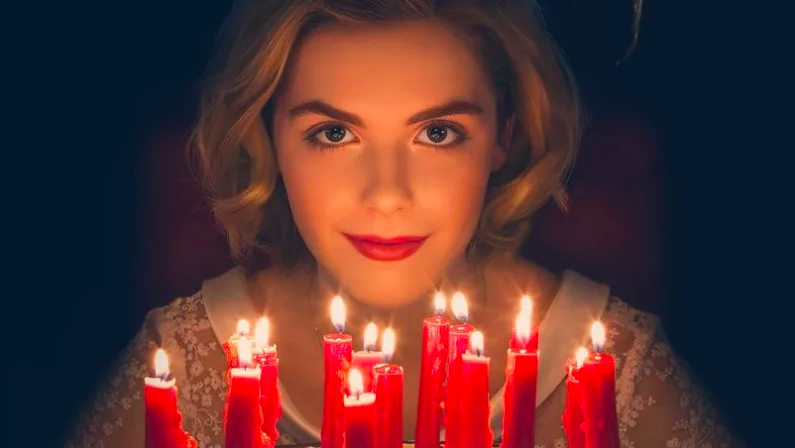 The Chilling Adventures of Sabrina will hit Netflix on October 26th. The excitement is real for this show and everyone is ready to see the Spellmans in all their witchcraft glory. The show follows its comic book predecessor, with a dark and chilling ode to the horror genre. Escorted by production designer Lisa Soper — BGN visited the set of the show and learned some amazing behind the scenes info, as well as easter eggs viewers can look forward to.

Different cues, props, and writing boards tell you of things that are to come or things that happened in the past. There are posters and references to the Archie-verse that any Riverdale fan will be excited to see. For example, there is a Jughead crown hand carved into the top of one of the bookcases in the library at Baxter High. It’s a crown with the words, “was here” written next to it. “What was Jughead doing in Greendale?”, we asked. Unfortunately, Lisa was tight-lipped on this one.

The furniture is custom made

The majority of the furniture on set was custom made so they can shift everything around with ease. Everything is on wheels as well. In Greendale, nothing was made up to date. It’s a town lost in time therefore, it requires a lot of different types of flooring and wallpaper. They have printing done in-house to give them the exact look they want. The walls and floors are all printed. The furniture is just as idiosyncratic as the characters on the show.

The set is designed to be timeless

There are influences from the 60s, 70s, 80s, as well as the Victorian era. There are dresses and props from the 1800s because some of the magical creatures are hundreds and hundreds of years old. The designers are trying to show that layering history. It also gives the audience a chance to find what they like and hold on to what they are nostalgic for. This timelessness gives the designers the freedom they crave. They don’t have to stick with just one set time period.

Color is a big deal in this show

Baxter High is very monochromatic. The browns and the greys leave everything to the imagination. You will see heightened colors going into the magical world, and it is opposite of what you would normally expect. Usually, the real world has big bright colors, but the show does their color hits with the items and dressing in the show. When it’s Christmas, it’s a true “Christmas” with red, green, tinsel, and trees. When it’s Valentine’s Day, it’s a true “Valentine’s Day” with the pinks and the reds all over the place. They marry into what is happening with the characters of the story.

The books on the dark arts are all handmade 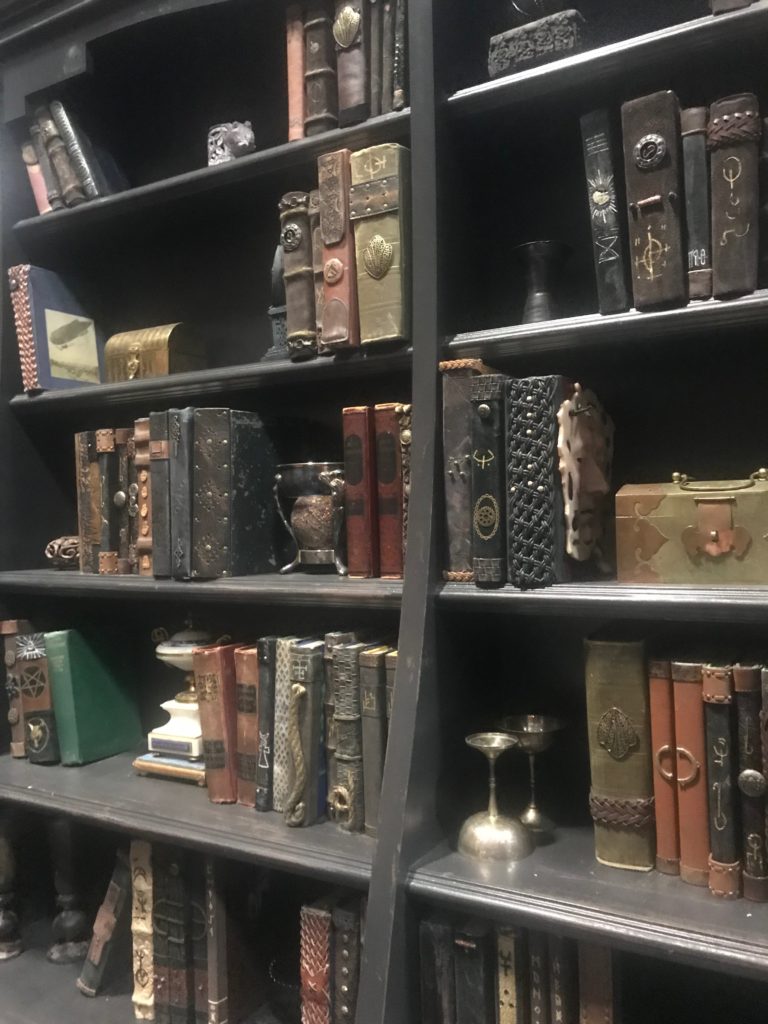 They are colorful and different sizes. The dark arts books are far more exciting to look at than the books in the mortal world. They are extremely decorative. Some of the books have spells written on the binding. Others have feathers and colorful tassels that hang like bookmarks. There are some with small charms attached as well. The books are detailed and very ornate.

The Academy of Unseen Arts is shaped like a pentagram

The idea was to make it look like a never-ending pattern. There are numerous rooms shaped like this that give the feeling that the room or building just keep going and going, like a fractal. Pentagrams are also recognized and important symbols in witchcraft. The Spellman house is also noted to have this never-ending theme as well. Rooms just keep going like you are going deeper and deeper into it. 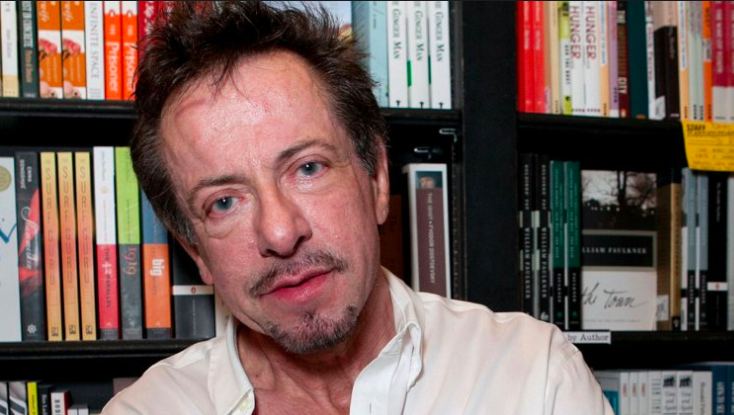 The legendary director and writer of some classics like Hellraiser and Candyman gave over 150 pieces from his own collection that are used to change the set. Clive didn’t get the opportunity to get on set to see the transformation for himself, but he’s very excited for the show, according to Lisa. Death, evil, and creatures of the night are the main themes of these pictures.

All the sculptures are carved in-house 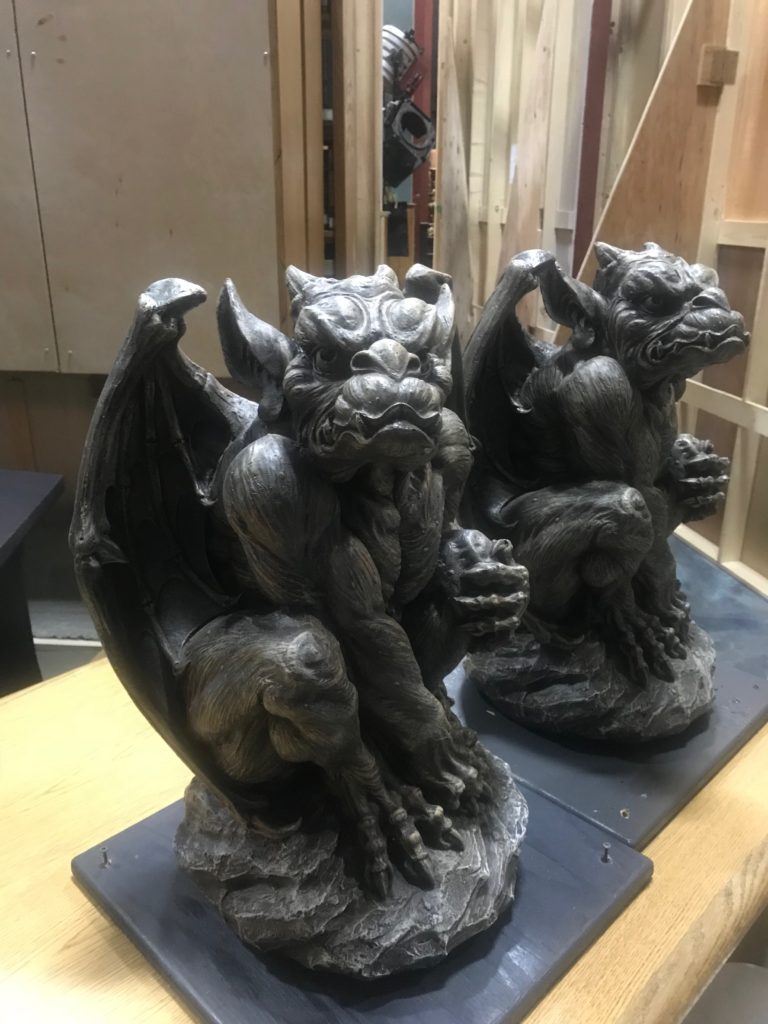 The sculpture of the dark lord and children at the center of the Academy of Unseen Arts took 3 days to make. He is modeled off of Baphomet, who is seen throughout the real Church of Satan. The first statue of Baphomet was created in the 1400s. There are also sculptures of gargoyles and statues of decapitated saints and religious icons. There are personal nods to Clive Barker in Madam Satan’s home as well, from the wallpaper to the flooring, to the stain glass windows in the front entrance.

The Pagan rituals are real

All the writers and designers are sticklers for showcasing everything the right way based on actual history.  The crew followed suit and really got into the show. So much to the point, when someone sneezes, instead of saying “bless you”, they all say, “Hail Satan”. When new directors come in for an episode, they have no clue what’s happening and they freak out a bit.

In Madam Satan’s home, along the fireplace are little figurines and pieces that each tell a different story from different episodes. Some of the trinkets include a clock, a cross, and a black figurine of Satan. They all have a significance because Madam Satan has a lot of different stories and character arcs. The man riding a little horse, in particular, is very important. Madam Satan has a shelf of dolls that resemble every character in the show.

The spells are real

With all the devil and witchcraft items on and around the set, there is always weird stuff happening. The Spellman’s cupboards are filled with ingredients for real spells. The set has actual protection spells so that, “none of that nonsense affects them in a negative way”. In the witch’s entrance of the Spellman house, there is a protection spell written all along the trim of the ceiling. There is also a protection symbol on the floor in the entranceway. It is to prevent bad things happening on the show in real life, while it is also used to keep out the witches that would do the Spellman’s harm.

There are a lot of nods to the 1977 version, Suspiria 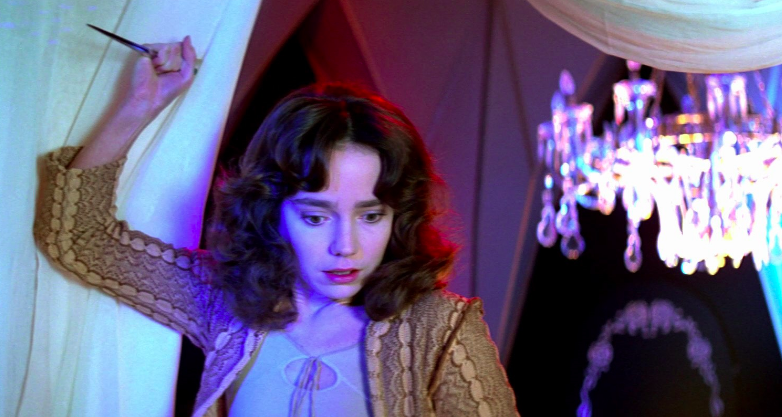 Every character also has a color

Lisa, the production designer, took tarot cards (a rider deck, the closest to the original and the most recognized) and did a reading for each character. Sabrina was the magician and was in a big red cloak.  Lisa also thought of feminism, power, the fierceness of the character. There are little touches of red in the story when shes following; almost like follow the white rabbit, but follow the red color. It helps tell the story in a more visual sense.

The Chilling Adventures of Sabrina was originally a CW order

The series was switched to Netflix later on. The switch provided flexibility creatively, to tell the story without network standards. The story in TCAOS is about breaking the rules and finding new horizons.

“The House of Seven Gables” was very influential

There is a full standing façade of the Spellman house which is a nod to both “The House of Seven Gables” by Nathaniel Hawthorne and the actual house in Salem Massachusetts. The front door of the Spellman house is a replica that’s given Sabrina an edge. It’s now red with a knocker and a window. As far as the harlequin pattern on the door with iron nails to keep witches out, it only exists in one actual place in history which is Salem, and now this door.

The Spellman greenhouse is full of treasures 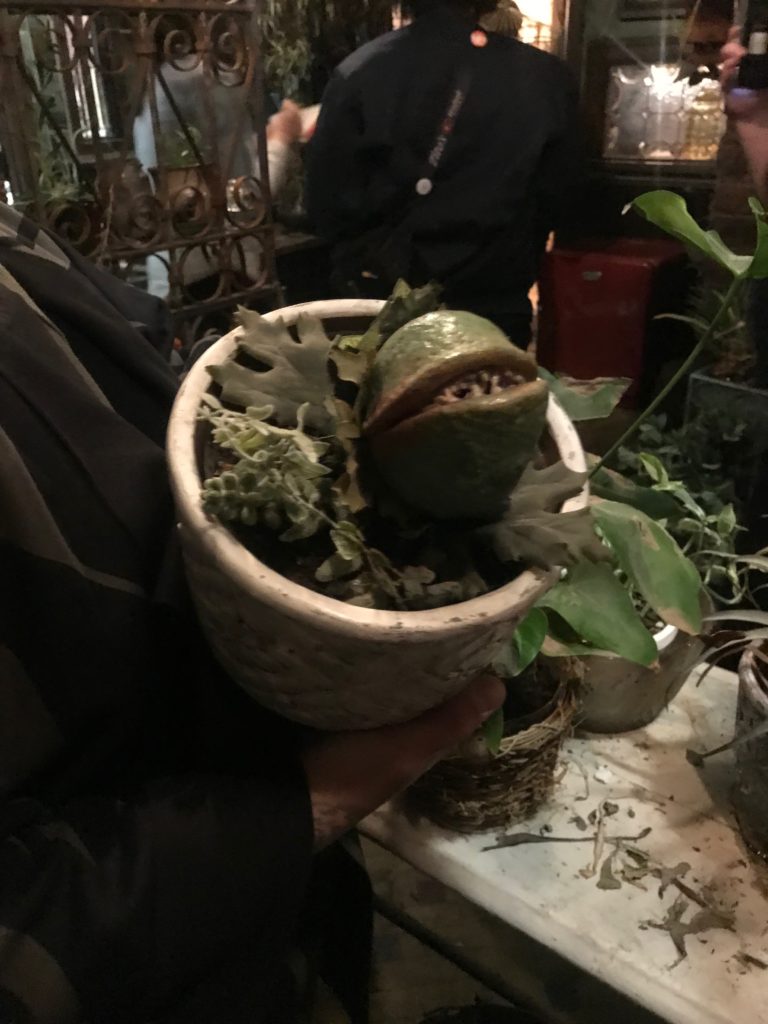 For one, there are numerous Baby Audrey II’s from Little Shop of Horrors in the Spellman’s greenhouse. There are also tons of rabbits sprawled about in the greenhouse. The story behind it is, back in the day witches used to transform into rabbits to evade capture.

The sets are full of iconic horror movies

Ambrose’s attic contains items from The Bates Motel in the 1960 version of Psycho. Sabrina’s room pays tribute to iconic horror movies like Village of the Damned and Nosferatu. Both rooms represent the struggle of each character in finding themselves. For Ambrose, it’s more finding his way of coping with his sentence — and with Sabrina, it is more of a coming of age motif.

There are popular historical paintings on set 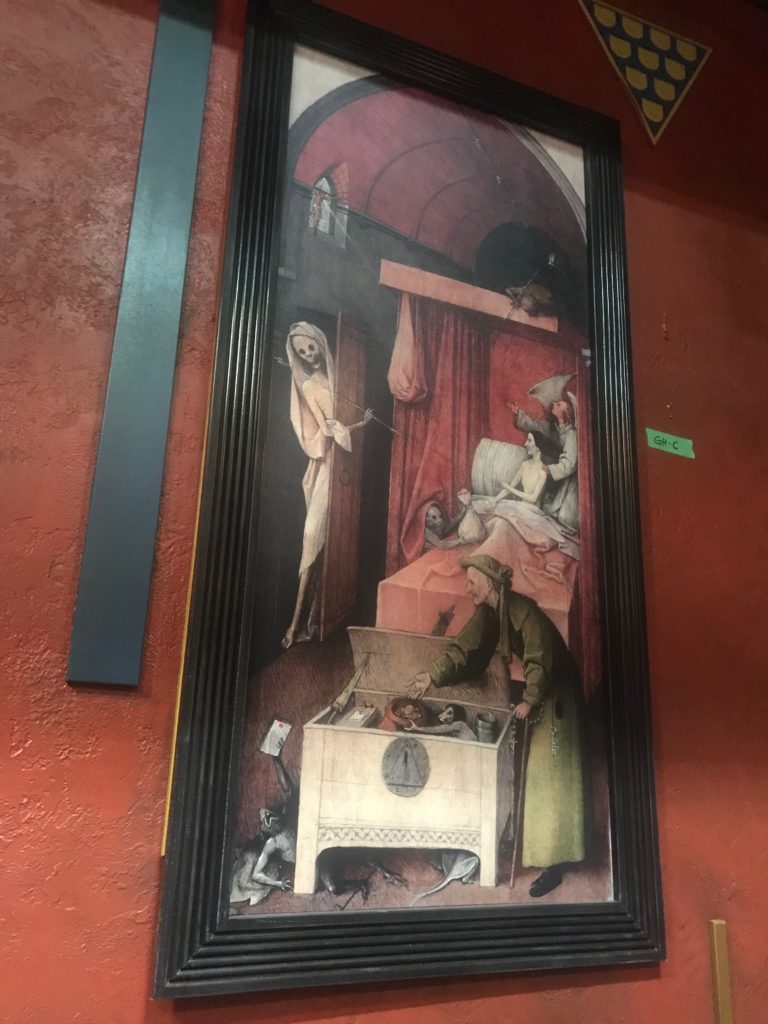 There is a painting in the witch’s entrance of the Spellman house that is of one of the first depictions of a ritual circle. It is called Magic Circle by John William Waterhouse, 1886. It depicts a witch drawing a fiery magic circle on the ground to create a ritual space.

The Spellman house is a nod to the Winchester House

The Winchester Mystery House (its full name) has 160 rooms, 2,000 doors, 10,000 windows, 47 stairways, 47 fireplaces, 13 bathrooms, and 6 kitchens house in San Jose, California. It was notably known to be built to confuse evil spirits. It was a never-ending project for Mrs. Winchester up until she died. It is said to be haunted by angry spirits who have been killed with Winchester rifles. The Spellman house takes note with its wonky hallways, doors that lead to nowhere, and an array of secret passageways.

The secrets behind Hilda and Zelda

Lisa likes to think that Hilda and Zelda were Siamese twins, which is why she created a single chair they have to share in their home office when they see clients. It also explains, in a way, the side by side twin beds in their room. Zelda has her own secrets when it comes to her wall of shoes. The shoes are trophies taken from people that she has hexed in the past.

The Chilling Adventures of Sabrina will be on Netflix starting October 26.