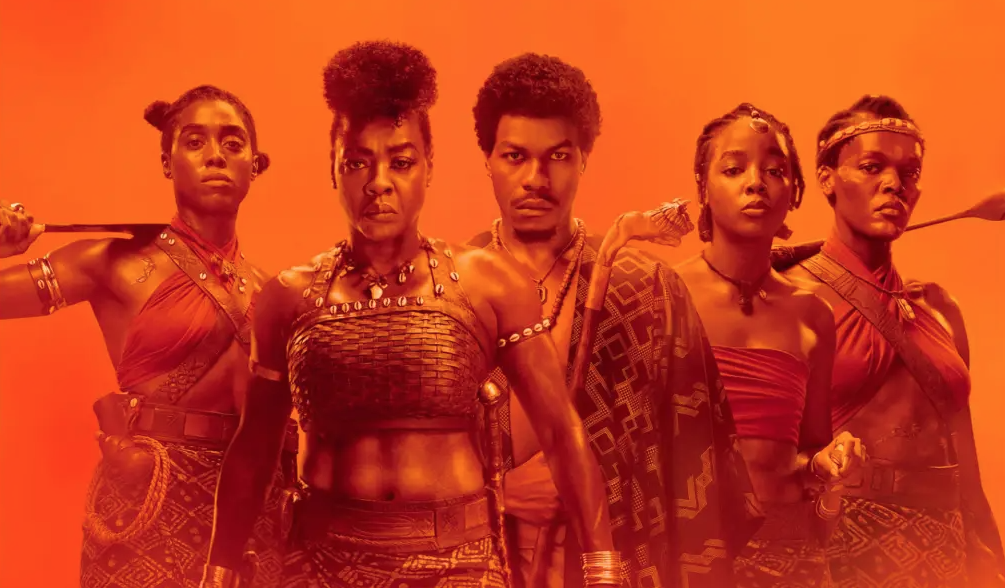 It’s time we address a strange elephant in the room.

There has been a lot of talk (admittedly largely coming from right-wing troll Twitter) about The Woman King, a recent film starring Viola Davis and directed by Gina Prince-Bythewood.

Now, on most other days, the right-wing, white male grievance trolling would be focused more on more boilerplate “issues” presented by the film: “The *woman* KING!?”; “Why doesn’t Disney turn these characters WHITE the way they turned Ariel BLACK!?”; “I bet if this were a story about white male warriors, it’d never, ever, nope, not ever get made. Not in THIS politically correct day and age.” And I would be happy to laugh at their so-called representational problems when I considered the fact that white men made up 30% of the United States’ population but 62% of its elected officials. I’d then pray to God that life gave my demographic group similarly egregious issues to try and cope with.

But then they brought up how The Woman King covers the Agojie, the all-female warrior unit that fought for the West African kingdom of Dahomey during the 17th and 19th centuries. They brought this up not, ostensibly, for the usual reasons of decrying the very idea that Hollywood represent Black women in film as anything other than mammies and sapphires, but because the warrior unit in question, along with the rest of Dahomey’s armed forces, was responsible for maintaining the kingdom’s lucrative slave trade.

Now, while I think the issue being raised by the likes of self-proclaimed “theocratic fascist” Matt Walsh is rooted in a bad faith argument concerned with whataboutisms and perceived liberal hypocrisy, I do think he raises an interesting point. About the slavery, I mean. Everything else is…Ugh…Yeah…Seek help, man.

In a time where films about Winston Churchill receive appropriate backlash about the whitewashing of history or the elision of darker aspects of a person’s legacy and character, it seems strange that there isn’t more of an outcry about the role Dahomey’s warriors played in perpetuating such a devastating crime against humanity. Of course, there are some distinctions to be made.

Often, controversy about biographical films valorizing historical figures is centered around persons that the zeitgeist has already deemed heroes. Meaning, your Thomas Jeffersons. Your George Washingtons. Hell, even your Gandhis. The issues are typically raised by members of marginalized groups who’d previously lacked the institutional and cultural power to affect who went into the history books and how. What’s now tiringly decried as “cancel culture,” no matter the circumstances, was originally the deconstructivist impulse of formally colonized peoples to question received knowledge about whom they should admire and revere.

How does this relate to The Woman King? Well, in case you hadn’t noticed, Black women don’t exactly hold the reigns of power in Western society. There’s less backlash to The Woman King by Black viewers likely because it hasn’t been shoved down our throats that the Agojie were a wonderful band of ladies who never did anything wrong. The film addresses the slavery issue, but some found it irksome that the only character to question the instituion is Viola Davis’ fictional General Nanisca — although it is worth noting that the Agojie were historically a part of the Dahomeian political faction that, from 1840 to 1870 prefered to trade in palm oil rather than human cargo. And yet, their stance didn’t change the fact that, before that time, they were more than happy to raid neighboring villages and nations in endemic warfare specifically designed to acquire more victims for the slave trade. It’s a dark stain on the reputation of this admittedly fierce, gender-role-defying unit of formidable female warriors. But it’s worth considering what went into their decision-making process as it concerned slave raids.

It is a myth to say that Africans enslaved other “Africans,” at least from their point of view. “Africa” was an arguably Roman or Greek designator of the continent, one neither chosen nor known by its inhabitants. To them, there was the land and the kingdoms that covered it. Further, there is often discussion about how Africans could have enslaved “their own people.” Well, again, to them, they didn’t. Pan-Africanism was a political movement of the late 19th century. Until then, especially to West African slavers for whom it was better not to question the humanity of their cargo, they were members of rival tribes and chiefdoms. As long as they were not enslaving members of their own group (at least not the ones deemed criminals) there was no real violation of brotherhood to be concerned about.

I can hear you asking now: “Wayne, does this mean you’re okay with slavery as long as Black people do it?” Why, no, hypothetically concerned person, I’m not. But I think it’s important to establish a historical context for how West African slave trading worked, lest we be forced to hear “BLACKS SOLD OTHER BLACKS” ad infinitum when “Black” was not a designator used by 18th and 19th century West Africans, and certainly not one that would have motivated them to feel some sort of inherent political and cultural fraternity.

So, what am I saying?

Am I saying you shouldn’t see The Woman King? No, as you may have already read on this site, it’s quite good, and possibly the best performance of Davis’ career.

Am I saying that any slaver should be forgiven as long as their actions are placed in historical context? Also no.

While we can give a million reasons why it existed, the fact doesn’t change that it is wrong to own and sell another human being and it always has been. Because, while human bondage has existed for thousands of years, so have calls for its abolition. There has never been a time in human history where we all agreed slavery was great. It’s just a matter of who held power and how that decided when we took action against it.

Do I agree with the right-wing trolls? No, man. No. But in their stupidity, they’ve accidentally made a good point. We should always be aware of the facts behind historical films. I believe it is important to show that women, especially Black women, are capable of anything when racist and/or paternalistic theories on what’s proper for women are removed from the equation. But that doesn’t mean we sweep the ugliness under the rug. We look at it head-on and say, “It’s amazing what we did then. But, since we know better, imagine what we can do now.”

The Woman King is currently in theaters everywhere.