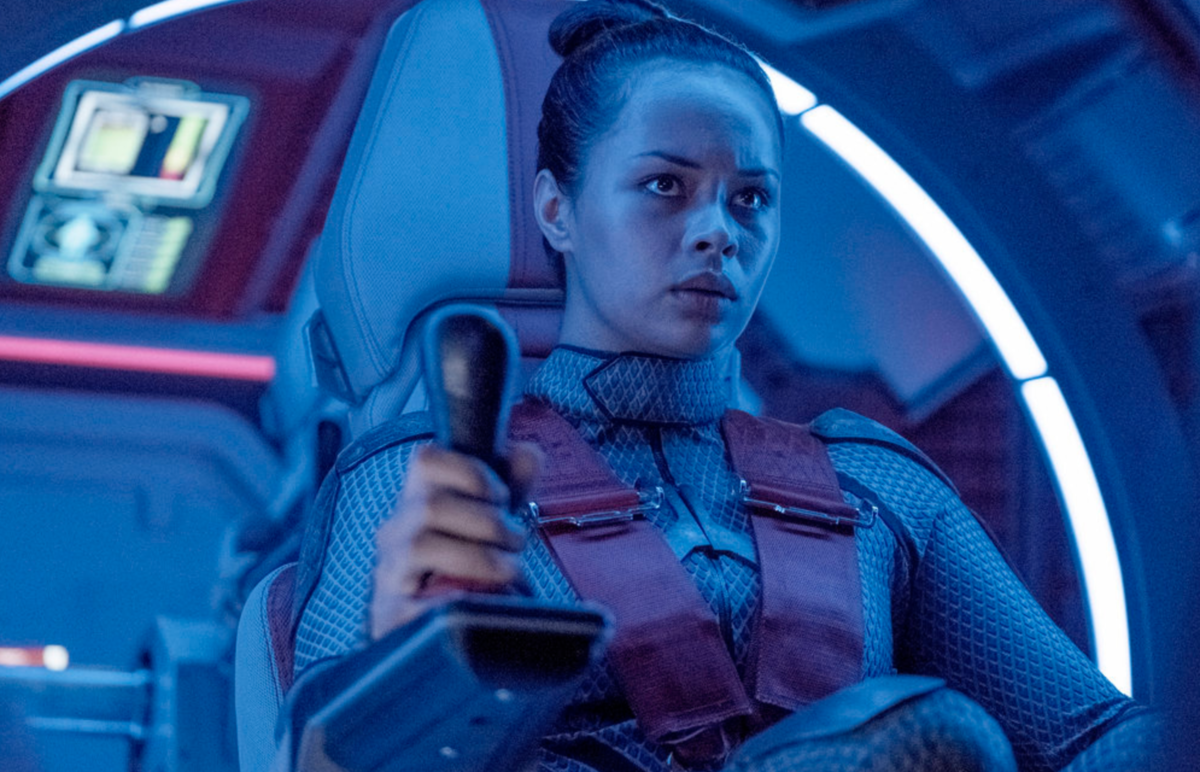 There’s no slowing down this season of The Expanse. In its second episode, titled “IFF,” the chaos that has become the solar system continues with one of the most badass spaceship chases I’ve seen in a while. We also find out what the crew of the Contorta (this new name is going to get some taking use to) ultimately decided to do about Meng’s daughter and are introduced to a new character that is sure to play a role in the Mars/Earth conflict.

The episode opens with Meng’s daughter, Mei, having nightmares. She’s still alive and in good health (maybe?), her physical appearance remaining humanoid. This is great news and suggests that she has not been irreparably damaged by the protomolecule — yet. Seems like Holden made the right decision when he suggested that they continue their search for Mei episode (I’ll give him some brownie points for this).

The scenes with Mei reveal a lot about the whole protomolecule experiment project, specifically that Jules Mao still runs things, that children with Mei’s genetic condition are essential to protomolecule experimentation, and that the protomolecule is extremely unpredictable and everyone, and I mean everyone (Mars, Earth and The Belt), should really turn their attention to Venus. Mao and his people seem to understand the threat on Venus, but with Earth and Mars acting ridiculous and warring across the solar system, I doubt that Venus will get the attention that it deserves until it’s too late. Hopefully, the protomolecule isn’t inherently evil, and whatever it’s doing on Venus won’t result in the destruction of humanity.

Outside of the whole protomolecule experiments, most of the episode was spent following Bobbie Draper and Chrisjen Avasarala in a deadly games of cat and mouse with an UN gunship. The UN vessel The Hammerlock is on the hunt for the Earther and Martian, requiring that Bobbie put her evasion skills to the test. Unfortunately, the Hammerlock detects their ship and a chase ensues. Fortunately, Julie Mao’s ship is fast, and pumped up on space juice, Bobbie and Chrisjen do some flying that would put pod racers to shame. The stress from the velocity of the ship takes its toll on Chrisjen, whose Earther body isn’t made for the forces of space. On the verge of stroking out, Chrisjen doesn’t lose her head and instructs Bobbie to send out a distress signal to alert Martians of their whereabouts. A Martian jail cell is safer than the sights of a UN gunship. This why I love this character. She has grit.

While Bobbie and Chrisjen dodge missiles and send out distress signals, Errinwright is back on Earth being his evil self. With the ear of Earth’s Secretary-General at his disposal, Errinwright easily manipulates his government in its war against Mars. With Earth protests and heavy casualties on both sides, Errinwright’s schemes to overpower the system with brute force and protomolecule goo (yes, he’s still harassing Mao about protomolecule weapons), Errinwright’s power play could be interrupted with the introduction of a spiritual leader, Anna (Elizabeth Mitchell). Anna is long time friends with the Secretary-General and from what is revealed in the episode, she will serve as Earth’s moral compass. It’s good to see that Errinwright will have someone to push back on his immoral shit. Hopefully, he doesn’t have her assassinated, or worse have her wife and young child murdered. Knowing Errinwright, it wouldn’t be surprising if he tried.

Now, to the best part of the episode (the whole thing was deliciously good, but this is the icing on cake). Guess who hears Bobbie and Chrisjen’s distress call? Yep, the crew of The Contorta! No one on the crew recognizes Bobbie’s voice though, and Holden who is set on rescuing Meng’s daughter from Mao’s protomolecule lab, doesn’t want to answer the distress call.

Alex wants to answer the distress call as does Naomi. Amos agrees with Holden. It’s up to Meng to break the tie. We don’t know what decision Meng makes until later in the episode when missiles headed for Bobbie and Chrisjen’s ship are shot down and several cruiser missiles begin to escort them. After that, there’s some wild flying by Alex, some clever programming of the missiles by Naomi, and a scene involving power tools, low gravity, and Amos and Meng tackling a lethal situation. In the end, most of the Contorta’s resources are depleted to Holden and Meng’s regret. But their looks of regret are soon replaced with utter surprise when Bobbie Draper boards the Contorta with Chrisjen’s limp body.

The episode basically had me on the edge of my seat. I love the maneuvering of space ships, the anticipation of certain doom only to be gifted with concepts of fate and preservarance. I love the potential of the Contorta and I’m confident that the crew of the Contorta will thrive, especially under the direction of Chrisjen.

Can’t wait until next episode. Until then, yam seng!

The Expanse airs on the SyFy network at 9/8 Central.