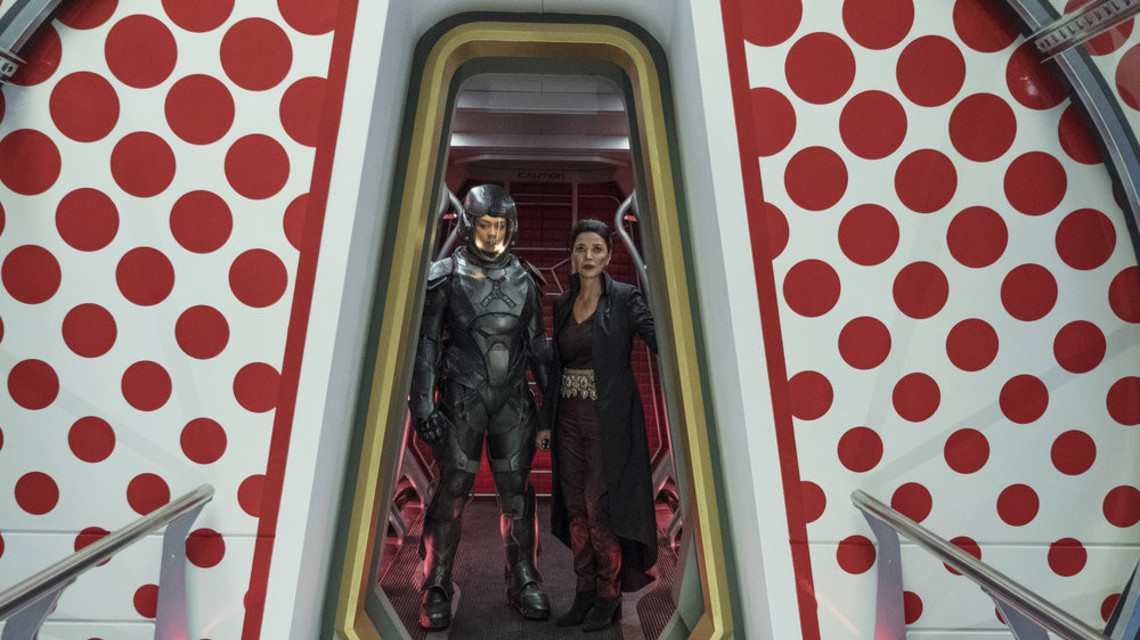 Warning: Spoilers for Season One and Two of The Expanse.

I’ve been covering The Expanse for Black Girl Nerds ever since the space opera came out in 2016. When I first saw Julie Mao floating in a gravity-free environment in Season One, I knew that the SYFY network had something special. When the second season came along, I got to know many of its characters intimately. Amos (Wes Chatham) and Alex (Cas Anvar) blossomed into complicated and likable individuals. Bobbie Draper (Frankie Adams) proved to be a worship-worthy Martian Goddess of destruction. Naomi (Dominique Tipper) demonstrated apt leadership abilities, which made me wish that she was captain and Holden (Steven Strait) was the reliable, sometimes testy, lover/sidekick (no offense, Holden). Season Two also delved into Belter culture a bit more than Season One, something that I enjoyed as an archaeologist/anthropologist. And the politics, whoohoo! If you thought Game of Thrones had a complicated political system and social hierarchy, well try steeping yourself in Belter/Martian/Earther politics!

With the success of last season and the juicy cliffhanger that left me fretting for the past year, (ugh, it was rough!), it felt good to slip back into the space opera. I was able to screen the first few episodes of the third season and I wasn’t disappointed. The new season does an excellent job of continuing the character development that was expertly executed last season. In its few episodes, we learn more about Meng (Terry Chen), the botanist that joined the crew of the Rocinante in hopes of finding his daughter, Mei. We visit the repercussions of Naomi Nagata’s decision to give a sample of the protomolecule to Fred Johnson (Chad L. Coleman), and we get to see what Bobbie Draper is made of.

What really stood out to me this season of The Expanse was the brilliant performance given by Shohreh Aghdasloo (Chrisjen Avasarala). Aghdasloo shines as Chrisjen, and the essence of the character really comes through in scenes where she is on the run from Errinwright. Chrisjen overwhelmingly proves that she can thrive in any environment she’s thrown into. Stressed and in survival mode, Chrisjen wields as much power as she did in the most tension-ridden diplomatic scenes of last season, except now there is an immediacy to the danger she is in.

In previous seasons, we got to see Chrisjen play beautiful political chess as she cut people down with her words, all while exuding a level of elegance typically reserved for royalty. In the new season, we get to see what Chrisjen is capable of when the solar system is at stake, and let me tell you, she just might be made of the same stuff as Bobbie Draper – pure space grit. Chrisjen keeps her wits about her in the most precarious situations, in one scene risking the threat of incoming missiles to get to the truth. In other scenes, when everyone, including Draper, seems to be on the verge of losing their shit, Chrisjen’s voice cuts through the chaos commanding them to get it together.

While I’ve only seen a few of the season’s episodes, I’m predicting that Chrisjen will shine like never before. That is, if she’s not murdered first (crosses fingers). I’ve always been intrigued with her character, and yet there’s something more tangible about her, something I can’t quite put my finger on this season. It could be the fact that I’ve always looked up to strong women like Chrisjen, women that remind me of my aunts and my mother. It could be all the jewels and cussing and the fact that a middle-aged woman is portrayed as such an intrinsic part of The Expanse universe. But it’s most definitely because Chrisjen is complicated, intelligent, and has the courage to risk everything for truth and justice. Chrisjen is my everything right now, and I so wish our political system had someone like her sniffing out the BS that seems to be plaguing our country. But, I digress…

Chrisjen being my favorite this season doesn’t mean that other characters didn’t pique my interest. I still felt like rooting for Naomi even though she’s in the doghouse for giving the protomolecule to Fred Johnson. And I still crush on Meng and Alex and Amos. And of course, there is Bobbie f@cking Draper to fangirl over (oh my God, is she a badass!). In other words, the cast of The Expanse is truly excellent at their craft, which made the season that much more enjoyable to watch.

Another real treat that was continued from last season into Season 3 was the continued exploration of The Expanse universe’s tech. Specifically, Bobbie Draper’s mechanized suit. Sure, last season showed her shooting off rockets and recovering from the protomolecule hybrid’s attack (more about the protomolecule later). But this season Bobbie’s suit gets a full work out. Check out this video clip of her going on a pretty wicked space walk:

If you are like me, I live for stuff like this in science fiction. I’m old school; I loved the film Aliens and get absolutely giddy about science fiction films and television shows that give attention to the space environments their protagonist navigate. The Expanse certainly gives us its share of these environments, with fancy spaceships, moonscapes and alien protomolecule goo.

Outside of Bobbie rocking her Martian mech gear, it was super satisfying watching the Martian team up with an Earther (Chrisjen); a political figure from a culture that Bobbie’s been taught to despise her whole life. Bobbie is after justice and truth and it was refreshing to see a character follow her moral compass whilst throwing Martian political ideology into the wind. Unlike what we are witnessing in the US GOP with all of its investigations, nepotism, turmoil, and corruption, Bobbie doesn’t let her political affiliation to her homeworld blind her from the truth. The truth being that both the Martian government and corrupt Earther officials are guilty of genocide, murder, and dangerous and exploitive experimentation. All in the name of the protomolecule. To see Bobbie clearly decide to do what was right and to risk her life to do it was cathartic and my hopes for the character, which were high before, have risen to astronomical levels.

On a different note, the villains this season on The Expanse look to be juicier than ever. You have the backstabbing and corrupt Errinwright manipulating things to the extent that Earth and Mars are at war. You have Jules Mao on the run but still involved with the protomolecule, and you have Fred Johnson, who may or may not be just as corrupt as the leaders of Earth and Mars’ governments. And finally, you have the protomolecule hanging out on the love planet (Venus), revealing an unmistakable truth about extrasolar alien objects; they tend to be unpredictable.

All in all, the new season of The Expanse returned pumped up on space grit and space juice. It’s worth your attention, and I get the feeling that this season might be the best season yet.