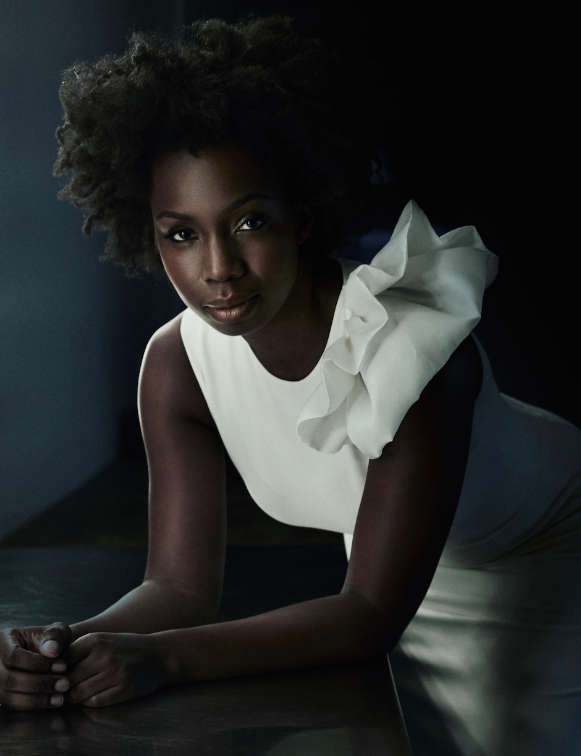 Oduye is known for her roles in Dee Rees’ Pariah, The Big Short, Twelve Years a Slave, and When They See Us.

Being one out of seven siblings raised in a large Nigerian family, Oduye is no stranger to the importance of sibling relationships and family.

She connects to her character Sarah through the desire to protect family. In
Episode 1, we learn that Sarah lives in Louisiana and struggled during the Blip to fend for both her children and family business by herself.

BGN was able to catch up with Oduye about her role as Sarah and appreciate the way Oduye illustrates the love and sacrifices from Black women like Sarah that are so often the foundations of their families, superhero brothers included.

Is it important to explore Sam’s family background in the series, and if so, why?

Yeah, at this particular point in terms of where we left off on End Game, this man is being passed this mantle of Captain America. I think if you’re going to expand the story, we have to see where he comes from and which issues this show is tackling. Like, what does it mean to have someone carry this mantle? What does it mean to be American? With everything going on in this country and Sam Wilson being a Black man?

It goes deep, and you have to show those roots. So, I think that’s definitely one of the things that drew me to the project. Already in the first episode, these things are coming up — how can you explore that side without getting into the nitty-gritty of the family and everything, ramifications of what’s happened when everything got back to normal and where we left off in Avengers: Endgame.

When Sam returns, do you think that Sarah feels like he doesn’t understand the struggles that she’s experienced during the five years of the Blip?

It’s hard because he doesn’t know what she’s going through. She doesn’t know what he went through. It’s navigating that, which I can only imagine was happening a million-fold for everyone else around the world when people just came back to their families and loved ones. The ramifications of that and what that was like has definitely affected the relationship. Yes.

Do you feel that Sam’s entire superhero career has taken a toll on his relationship with Sarah?

I’m one of seven and when you get to a certain point, you have your own life. I mean, she [Sarah] has kids and she’s a widow even though she was married. When you have a sibling depending on the age, they go off to college, maybe they go to a different city, different state. It’s just kind of that’s what they do.

I have siblings who live across the country. My brother, he was a prosecutor and he’s in LA, and that’s what he does. It’s just a different direction. The relationship takes a different form because we’re not kids anymore.

So, I don’t necessarily think it’s what he [Sam] does that takes a toll. I think it’s just everything that happened as a result of what he does. The Avengers just took a toll on her as well as anybody in the world.

One of the highlight scenes of the first episode is when Sam and Sarah go and try to get the loan. We see that Sam has an inability to save the day, but it’s not a high stakes situation that he’s used to. What does this scene highlight about the inequities that still exist for someone, specifically a Black man, regardless of his superhero title?

In that scene, Sarah is kind of like, “I told you, I already told you that I tried and I told you,” and he thinks he can go in there and fix it and get it done. Then, it’s like, no matter how many of us that happens to, it doesn’t matter where you go, what kind of car you drive, what your job is. You know, there are things that just happen. These inequities are baked into the fabric of our society as we’ve just seen time and time again. It has blown up in our faces — well, the country’s faces — from many of us not unnecessarily so, in this past year.

It’s sad, but it’s true and I think that’s why it’s important for those of us who are at the edge of those inequities and why the community is important and family and love and how we come together to mitigate and make things happen.

Sarah is a single mom. She’s lost her husband. In many ways, she’s lost her family. So, she’s bearing a lot on her shoulders. Would you say that Sarah is a hero?

You know, so many people that we know in real life are superheroes. What people are able to do under extraordinary circumstances with a certain amount of resources is incredible. I mean, I am legit an example of my mother’s superhero-ness, and that definitely is reflected in Sarah, in my humble opinion. And, you know, I love that.

The first episode of The Falcon and the Winter Soldier is available for streaming on Disney+ now, with new episodes premiering on Fridays.