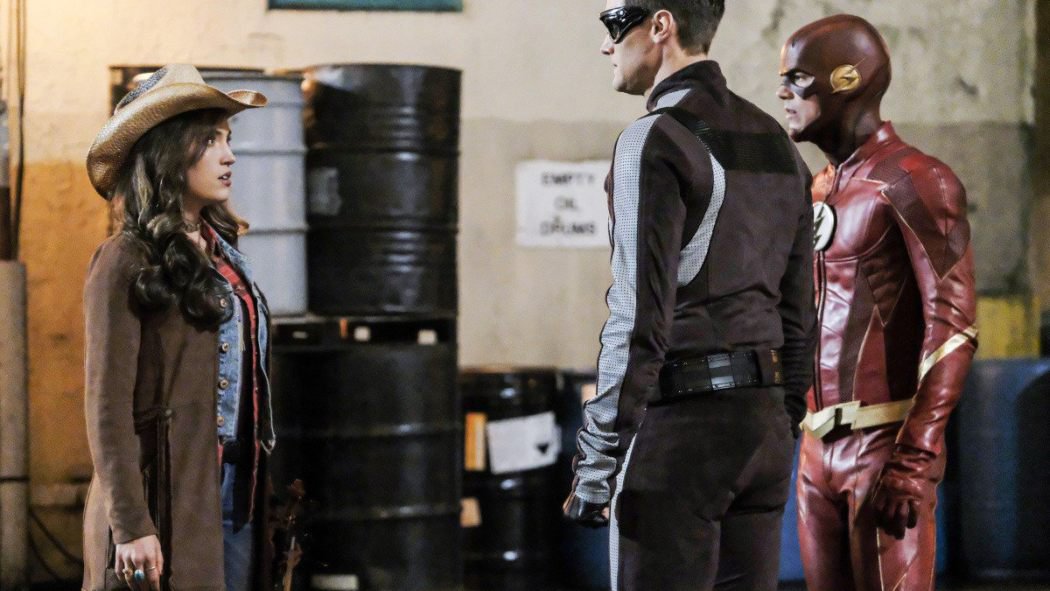 Yep, country music played a role on The Flash this week, fiddles and all. Izzy, a meta-human with the ability to manipulate sound waves (I think) brings a new set of superpowers into the fold, revealing that DeVoe isn’t as invincible as he puts on. While this was a big reveal and proved that his brilliant mind isn’t exactly all knowing, the episode fell flat.

I’m not sure how I feel about fiddle meta-powers or the cowgirl attitude and weird chemistry that bus meta Izzy brings into the episode. Additionally, the casual way in which Team Flash attempts to manipulate her into using her powers against DeVoe is lackluster and not fun at all. But whatever, there were some fun moments, namely between Harry and Cecile who inject the episode with brief moments of humor (more of them, please!). Anyway, here’s what happened on The Flash in its latest episode, “Subject 9.”

The last time we visited Team Flash, Barry had just gotten out of jail and our heroes had come to the realization that all the body snatching DeVoe’s been doing this season meant that Dibny could be next. Because of this, a Dibny meta-buddy system is enforced to ensure his safety. In this week’s episode, Barry has buddy duty, and the two track down country singer, Izzy.

Izzy is a dark matter bus meta, and Team Flash tracks her down in hopes of protecting her from DeVoe’s body snatching meta-cannibalism. Barry and Dibny find her playing fiddle and belting country tunes in a bar. The two warn her at the end of her show about DeVoe. She laughs them off, that is until they inform her that they know she is a meta and that she needs to come back to Star Labs for protection. But instead of heeding their advice, Izzy blasts Barry and Dibny with a sound wave, rendering them useless. When the two recover from the audio assault, Izzy is gone.

As Barry and Team Flash scramble to relocate Izzy, Clifford DeVoe is also on the hunt for the singer. DeVoe, who is typically as cool as a cucumber, exhibits a sense of urgency in his tasks. Turns out, he needs to do a body swap or he’ll die. His “Becky” body isn’t holding up too well, and he takes his anger out on his wife, Marlize. Marlize, who I’m willing to bet is under the “infatuation drug” DeVoe concocted last episode, tries to keep up with her husband’s demands. He blames her for his ails, insisting that she needs to do better.

DeVoe locates Izzy as she’s once again approached by Barry, Dibny, and Cisco. The trio is decked out in their superhero gear in a last-ditch effort to convince Izzy to let them protect her from DeVoe. DeVoe interrupts their little conversation, easily taking out all three heroes in a mere few seconds. When DeVoe turns his sights on Izzy, she blasts him with her powers. Surprisingly, her attack knocks DeVoe off his feet, surprising not only DeVoe, but Team Flash as well.

DeVoe makes a fast exit with the help of Marlize, while Izzy goes back to Star Labs. DeVoe reprimands Marlize, this time for letting her feelings for him jeopardize the mission. DeVoe is set on getting access to Izzy’s powers and body, convinced that his body snatching plans will work.

Back at Star Labs, Barry pushes Izzy to hone her powers. After seeing how she was able to take DeVoe down in her first meta-human fight, Barry believes that she might be the key to defeating his nemesis. He pushes her, hard, and Iris, as well as Dibny, call him out on it. But you know Barry, when he wants something, he’s going to do it no matter what. So, he ends up pushing Izzy too hard, and she takes off to face DeVoe by herself. This decision ultimately ends with Dibny and Barry getting beat up by DeVoe and concluding with them watching Izzy getting body snatched.

And, that’s basically the episode. Oh, which ends with Barry and Dibny pairing up to be private investigators since Barry is on indefinite leave from CCPD.