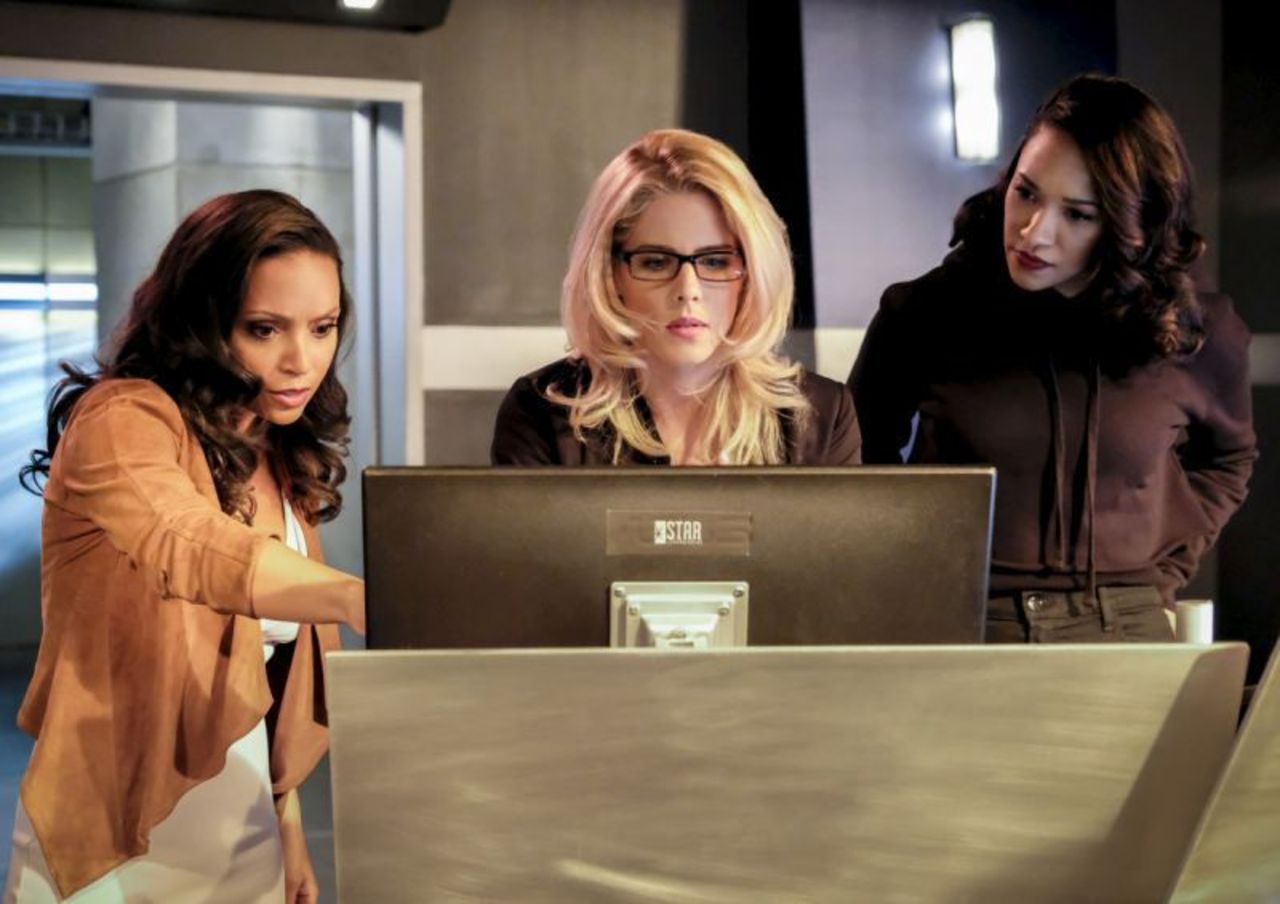 It’s not often that The Flash dedicates an episode entirely to the women on the show. In “Girls Night Out,” Iris, Caitlin, Cecile, and Felicity (Arrow) hit the town for Iris’ Bachelorette Party while the guys, lead by Cisco, plan an evening of cigars, old Barry Baby videos, and steak. As innocuous as this sounds, the main issue with the episode is its inability to deal with the trauma Caitlin inflicted on Iris as Killer Frost last season. It’s briefly brought up by Cecile, who was kidnapped by Frost during the Savitar fiasco, but it’s largely swept under the rug as a “nothing burger.”

It’s understandable that The Flash writers want Iris and Caitlin to be friends, to have that girl power thing going on. However, for most of the series, Iris and Caitlin have navigated separate narrative arcs. There isn’t a sense of comradery between the show’s characters, and to make them besties so suddenly feels forced and unrealistic. This is especially true since just last season Caitlin worked with Savitar to bring about Iris’ demise. It would have been prudent if the writers addressed the trauma Iris experienced at the hands of Caitlin’s Killer Frost instead of attempting to gloss over it. If they had addressed it, the two characters could have moved onto slowly building a meaningful friendship. Instead, Iris is written as if the trauma Caitlin’s alter ego inflicted on her last season was a simple blip. Treating the issue in this way essentially erases Iris’ experience as a victim of psychological warfare. This trauma needs to be dealt with immediately, even if it’s addressed in a light-hearted episode like Barry and Iris’ therapy session.

The whole Caitlin/Iris situation is reminiscent of what black women and women of color have to deal with on the daily; being expected to forget and forgive all the harmful macroaggressions directed towards us in our daily lives. This is made evident at work, at school, and sometimes within our own families. We are expected to hold our tongues and smile or ignore when harm is done to us. We are expected to take the high road, to “teach” folks that claim to be unaware that their actions maim and erase use. And if we don’t follow through with grinning and bearing the negativity thrown at us daily, we are labeled irrational and angry. Iris West is made to bite her tongue this episode, and if “Girls Night Out” was truly about solidarity and feminism, she and Caitlin would have had it out prior to jumping on the “let’s be friends” bandwagon.

While the episode attempts to mix business with pleasure, it’s not entirely successful. Still, there are some laughs and it was fun to see the characters let loose. However, the whole Caitlin/Iris issue doesn’t look like it will be addressed, which is sad because it could have resulted in some awesome character building.

Here are the highlights from “Girls Night Out.”

The episode opened with Barry, Cisco, Harry, and Ralph Dibny brainstorming the identity of the mysterious Mr.DaVoe. Their research is interrupted by the sudden arrival of Felicity (Arrow) who shows up at Star Labs for Iris’ Bachelorette Party. After some playful banter between Felicity and Team Flash regarding Star Labs’ lack of security, the guys call it a night and head over to Joe West’s house for steak and cigars. The identity of DaVoe is just going to have to wait.

Iris and the ladies go out to party

While the guys head off to Joe’s house for a Cisco-style Bachelor party, Iris and Felicity invite Caitlin to Iris’ Bachelorette party. Caitlin politely declines their offer, only agreeing to go after the two pressure her. Apparently, Iris doesn’t have any friends because even after Caitlin describes them as “work friends” Iris still wants to hang.

Anyway, Iris, Felicity, and Caitlin meet up with Cecile for a lovely dinner but are soon interrupted by a man Felicity mistakes for a stripper. Instead of taking off his clothes, he removes one of his eyeballs and it plops theatrically in one of the ladies’ drinks. As a nasty squid thing shoots out of his eye, he demands that Caitlin leave with him to meet up with supervillain Amunet Black (Katee Sackhoff). When Caitlin refuses to leave with him, Felicity, Iris, and Cecile attempt to fight off the villain. This is when Killer Frost makes her debut and takes down Amunet’s henchman.

The remainder of the episode consists of Killer Frost, Iris, Cecile, and Felicity thwarting Amunet’s attempts to 1, murder Caitlin and 2,  sell a meta-human drug that’s implied to be very addictive.

While this story arc could have been fantastic, it falls kind of flat. Sackhoff is fantastic as usual with her toothy smile and overzealous machinations and was as hokey as is expected for The Flash. However, the way in which she was defeated and her subsequent unencumbered escape was lame. The good thing though is that Katee will likely have a few more appearances on the show. 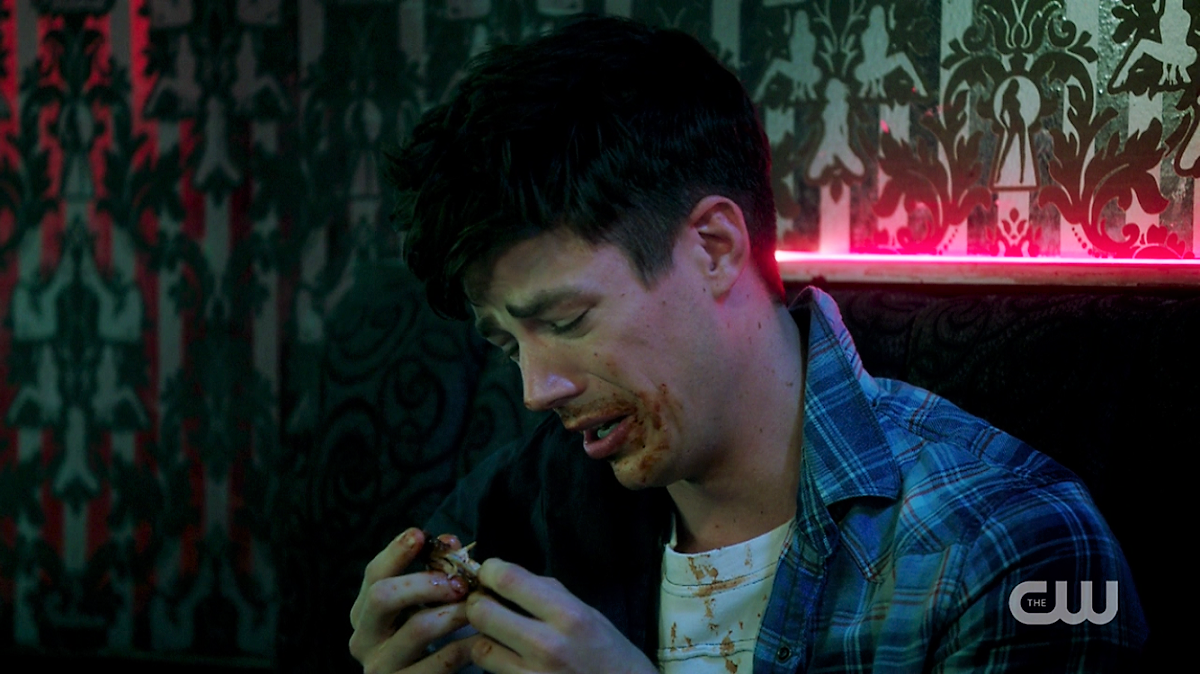 While Iris and the ladies deal with the episode’s baddie, Barry and the guys are enjoying cigars and old movies at Joe’s house in a Cisco-style Bachelor Party. The guys are soon interrupted right before Cisco busts out cigars by Ralph who convinces them to move the festivities to his favorite strip club. Between chicken wings, Cecile’s daughter dancing as a stripper, and a concoction Cisco whipped up to get Barry drunk; the Bachelor party soon gets really wild and everyone (sans Harry) ends up in jail. Of course, they get bailed out and Barry sobers up and has a heart touching conversation with his soon to be father-in-law.

It was fun to watch Team Flash let loose this episode, though we all could have done without Ralph’s The Mask antics during the bachelor party (we get it, he favors Jim Carey). One of the most enjoyable performances this episode was provided by Grant Gustin. Gustin’s chicken eating, adorable tipsy Barry was so fun — Cisco should make speedster drinks more often.