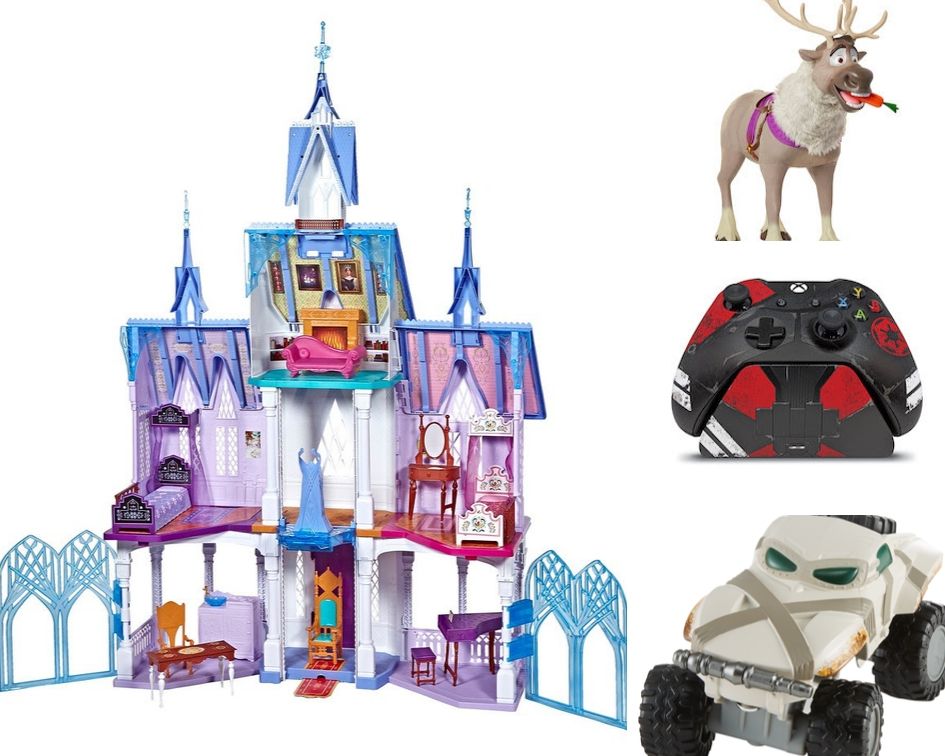 As you prepare for Frozen 2 and Star Wars, this holiday season Hasbro has released its latest selection of toys and collectibles for fans and kids alike — bring on the Disney holiday gift guide!

The following is a list of new products from Hasbro that you can use as stocking stuffers or big-box items under the tree. Some items are available now and some will be released later in the year.

STAR WARS ULTIMATE D-O INTERACTIVE DROID
Licensee: HASBRO
Ages: 8 years & up
MSRP: Starting at $149.99 / Available: Fall 2019 – exclusively at Target and Target.com
Description: Cobbled from odds and ends in the workshop of a droidsmith, D-O is an impressionable little roller that becomes fixated upon BB-8! The ULTIMATE D-O INTERACTIVE DROID lets kids and fans display and play with a replica that has a self-balancing wheel, multiple modes of play, moving head and antennas, and features light-up LED eyes, sound effects, and premium deco inspired by STAR WARS: THE RISE OF SKYWALKER. Drive D-O around using the free downloadable app, or play in one of multiple modes, whether D-O is resting in the included docking station or rolling around on the floor! When using the ball, Ultimate D-O will play in Follow Mode and Chase Mode. This interactive droid has premium deco, so it looks great on shelves while displayed in the docking station. With the ULTIMATE D-O INTERACTIVE DROID, bring the fun and magic of the STAR WARS saga home! Includes droid, ball, USB charge cable, and removable docking station. Requires 1 3.7V 500mAh LiPO battery, included (non-replaceable). Also requires 2 1.5V AAA batteries

FOR THE LEGO FANATIC

Enchanted Treehouse
Licensee: LEGO
MSRP: $49.99
Available: Oct. 4 at LEGO.com, Amazon, Target, Walmart and Kohl’s
Description: Build this magic treehouse from Disney’s new movie, Frozen 2, and have an enchanted forest adventure with your favorite Disney characters! Ascend to the lookout with Mattias while Anna and Olaf explore the forest below. Then slide down the zip wire and try to catch a fish to cook over the campfire for supper together in the upstairs dining area. Explore the LEGO® treehouse and discover a treasure chest, then venture outside to meet the bunnies in their woodland home. But what are these strange stones in the enchanted forest? They hold clues of an ancient magic that has been reawakened.

Arendelle Castle Village
Licensee: LEGO
MSRP: $79.99
Available: Oct.4 at LEGO.com, Amazon, Target, Walmart and Kohl’s
Description: Play out everyday life in Arendelle Castle with your favorite characters from the Disney Frozen 2 movie! Head out to the market stalls with Anna and Elsa to buy bread and fish, then go to the dock to bring the rowing boat in for Kristoff after his latest adventure. Inside the Disney Frozen castle, enter Elsa’s castle throne room on important business, look after the castle cat and 2 little birds in their bird house, and discover endless antiques and treasures in the attic. After a busy day, relax with Anna in her castle bedroom, pull back the comforter and tuck her inside the bed – she’ll need a long lie in in the morning! Easily remove and restack the castle’s three floors and mix, match and move all the furniture around however you like it, every time you play with this buildable Disney Frozen 2 toy.

FOR THE WATCH LOVERS

FOR THE FIGURINE COLLECTORS

Singing Elsa Doll
Licensee: Hasbro
MSRP: $24.99
Available: Oct. 4 at mass retailers
Description: This Singing Elsa doll has long blonde braided hair and comes with a Frozen 2 inspired outfit! Press the button on the musical Elsa doll’s bodice to hear a snippet of “Into the Unknown,” an original song from the Frozen 2 movie. When your kid presses the button, the Elsa doll’s dress also lights up to imagine a magical scene with a Frozen fan favorite! The Elsa toy’s outfit is a beautiful blue ombre with removable boots.

Singing Anna Doll
Licensee: Hasbro
MSRP: $24.99
Available: Oct. 4 at mass retailers
Description: This Singing Anna doll has long red hair and comes with a sequel-inspired outfit! Press the button on the musical Anna doll’s bodice to hear a snippet of “The Next Right Thing,” an original song from the Disney Frozen 2 movie. When your kid presses the button, the Anna doll’s dress also lights up to imagine a magical scene with a Frozen fan favorite! The Anna toy’s outfit is a beautiful black dress with purple-pink accents and removable boots.

Adventure Small Doll Collection
Licensee: Hasbro
MSRP: $24.99
Available: Oct. 4 at mass retailers
Description: This FROZEN ADVENTURE COLLECTION 5-PACK includes ANNA, ELSA, KRISTOFF, SVEN, and OLAF dolls with a wind accessory. ANNA, ELSA, and KRISTOFF are dressed in their travel outfits inspired by DISNEY’S FROZEN 2 so kids can pretend to journey beyond ARENDELLE with this tight-knit group of friends. Kids will also love pretending to embrace the elements with the wind spirit, with the wind accessory included. Each doll has four points of articulation.

Ultimate Arendelle Castle
Licensee: Hasbro
MSRP: $199.99
Available: Oct. 4 at mass retailers
Description: Inspired by Disney’s new movie, Frozen 2, the Ultimate Arendelle Castle is a feature-filled fashion doll playset for young fans of the movies! Open the gorgeous gates and explore the castle’s 4 floors consisting of 7 rooms: kitchen, music room, and throne room on the first floor, a vanity room and bedrooms for Anna and Elsa dolls (not included), a library on the third floor, and a lookout tower on top. The Frozen castle is 5 feet tall and 4 feet wide and includes 14 accessories to fill it up, like a piano, throne, banquet table, vanity, sofa, and more to play out fun scenes in each room. When kids push the button on the moving balcony, they can see a colorful light show inspired by the Northern Lights! Pull out the extending carpet in front of the throne to complete the royal décor. This majestic castle makes a great a holiday gift or birthday present for kids ages 3 and up who love the magical world of Frozen!

Playdate Sven
Licensee: JAKKS Pacific
MSRP: $99.99
Available: Oct. 4 at mass retailers
Description: Explore all of Arendelle with Playdate Sven, Kristoff’s best buddy. Standing over 2ft. tall, Playdate Sven is just the right size for a child to sit on. The epic adventure continues in Disney Frozen 2, the exciting sequel to the hit film, Frozen! Join your beloved friends, Anna, Elsa, Kristoff, Olaf and Sven as they venture beyond Arendelle’s gates to strengthen their bonds and make new discoveries that will change their lives forever. Hop on for a wild adventure like never before with Disney Frozen 2 Playdate Sven! Playdate Sven is child-size, perfect for a child to pretend they are galloping around the landscape of Arendelle with their favorite reindeer pal! Sven stands over 3 feet tall from hoof to antler and supports a child up to 70lbs. Feed Sven his carrot to hear him make real chomping sounds. Pull on Sven’s reins or press his head for galloping sounds and to hear him say phrases in Kristoff’s hilarious “”Sven”” voice!! Don’t forget to cuddle up to Sven’s soft faux fur mane too.

REY™ All Terrain Hot Wheels
Licensee: Mattel
MSRP: $7.99
Available: At Walmart, Target, Kohls and more.
Description: Your favorite Hot Wheels Star Wars Character Cars are taking it from the streets to any terrain in the galaxy. Designed with an active suspension and larger tires, these reimagined vehicles dominate off-road. Navigating the sandy dunes of Tattooing while on a high-speed chase is not a problem for these awesome racers. Encountering the enemy on the snowy fields of Hot becomes an afterthought as you plow your way through a nasty blizzard. Each vehicle is designed in 1:43rd scale with character-specific designs.

Anna Costume for Kids – Frozen 2
Licensee: shopDisney.com|Disney store
MSRP: $79.95
Available: Oct. 4 at shopDisney.com|Disney store
Description: They can recreate their favorite scenes from Frozen 2 while wearing this highly detailed three-piece Anna costume. The dress is beautifully accented with embroidery, satin trim and pom poms, and complemented by the purple velvet cape and coordinating pants.