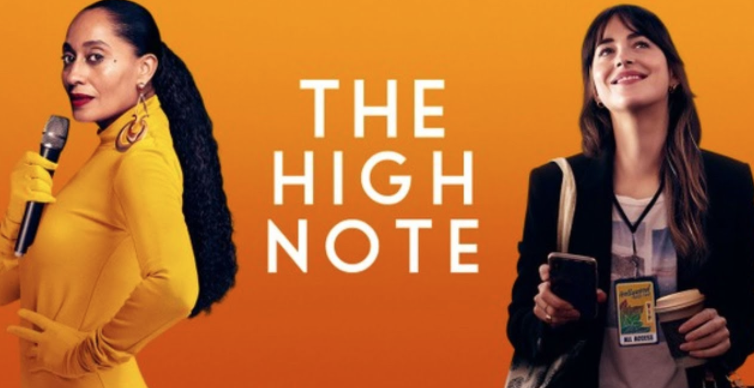 What happens when a personal assistant to a mega-star wants to be seen as more than a lackey right as the mega-star is hoping to reignite her career? Focus Features’ The High Note seeks to answer this question, and for the most part, it succeeds, in a lighthearted film that also addresses speaking up, being yourself, and how to find ultimate redemption for mistakes of the past.

The film features Grace Davis (Tracee Ellis Ross), an aging Black singer-songwriter mega-star (over 40! gasp! says this 58-year-old white reviewer) who is struggling to reignite her career through the resistance of her longtime manager Jack Robertson (Ice Cube) and the record label, all of whom want her to take the easy way out and continue to perform the hits from her glory days so the cash keeps rolling in. Nothing original from her is needed, thank you. This writer could definitely relate.

The film’s main character, though, is Maggie (Dakota Johnson), a young white personal assistant who wants to be seen as more than her job description. She has a highly attenuated ear, great skills with the sound board, and she herself can even sing, but she’s a nobody with no credibility. This once-upon-a-time young woman professional remembers that feeling, too.

Mega-star Grace has lost confidence and isn’t sure a “new her” will please her fans; personal assistant Maggie doesn’t know how to speak up without turning everyone in the room against her. The question is, do they need each other to succeed, or can they do it on their own?

For this role, Tracee Ellis Ross (Black-ish) is playing a diva but she herself is most certainly not a diva as an actor. I was impressed that she’s not afraid to show the ugliness of the character, to do really cruel things, to appear tired or spoiled or unfair. Watch her face. It’s all there. Dakota Johnson (of 50 Shades fame) also brought in a strong performance, which I have to admit I wasn’t expecting. There was a wide range of nuance in her acting, with honest and subtle reactions to complicated situations. I believed her.

All this probably speaks to the strong direction from Canadian-American film director Nisha Ganatra (Late Night). Ganatra’s sure hand brought out the best in these performances, and her work with film editor Wendy Green Bricmont (Mean Girls) ensured it all got on screen. Special shout out too to the director of photography Jason McCormick. I was captivated by long views of the city, shot after shot driving down iconic Los Angeles streets, and some lovely rainbow light bursts that really worked to capture the moment.

It was a bit of a stretch to think a young white woman would know more about producing for a Black mega-star than the star’s own lifelong manager, who was Ice Cube even, but the script tried to give her a backstory that accounted for that. Does having a hippie father who’s been a DJ her whole life at an obscure radio station on Catalina Island do the heavy lifting necessary? You’ll have to decide.

Maggie’s character did create some major messes for herself, as white women are wont to do. She lies, she hides information, she dumps her own first client into an awful situation. The script needed that tension and her subsequent downfall, which was basically being sent packing back to Catalina, but it still stretched the imagination to think a producer who’s serious about their artist’s success would not immediately inform said artist that they had an impressive gig coming up and spend the time until then getting them ready for it,  instead of tricking them into showing up as though it were a date and trying to thrust them onto stage. I mean, this kind of break of a lifetime for an artist, were it legitimate, would require some rehearsal, some scoping out of the venue, some gathering of the backup band. Certainly the headliner would have wanted to know who this new artist was, at least. So I dunno about that. The fantasy that is Hollywood, I guess.

But suspending all that disbelief, the story itself has some effective twists and a solid redemption. Both main characters are ultimately striving to be allowed to be who they really are. It’s a fun journey to find out if they need each other to do so. The original screenplay by Flora Greeson (titled “Covers,” and featured in the 2018 Black List of the best unproduced scripts of that year) has a lot going for it. In digging around, I found out that Greeson, a Los Angeles native, got inspired to write the script for the film while she herself was working as an assistant at Universal Music in New York. That actually explains a lot.

The gauntlet that Maggie has to go through every waking moment as a personal assistant convinced me by the end that personal assistants of celebrities need a union. This picture was probably on the mild end of the kind of abuse they have to put up with. I like to think that Ellis Ross knew that her character was being cruel and that she herself is not that way with her own team. I hope they’re all getting paid enough to have a decent car.

Despite the exploitation that is unfortunately a big part of Hollywood, I liked all the characters (except the slimeballs who laugh too much at the record label). There is a significant twist to the story that is delightfully resolved, again at that location in Catalina. The coincidence setting up this twist happened so much earlier that when that moment came, I was 100% there with it. The resolution left this viewer satisfied and happy. What more can you ask for from a film that is a romp through a world few of us ever get to see?

There are some sly almost in-joke moments for the active filmgoer. For example, it was really fun to see Eddie Izzard appear for a brief but pivotal plot point. And, this former continuity supervisor got a chuckle out of Bill Pullman doing a magic trick with a Fleetwood Mac album. That’s what happens when there’s a long day of shooting from one angle and then you flip the room and one scene is shot maybe on two different days and no one remembers who was holding what when. Just saying.

Overall, the film is fun, serious at points without being heavy, showing characters’ flaws and trauma honestly without being tragic, and providing a lot of laughs along the way.

Special shout out for the performance of June Diane Raphael as the cabana girl who lives in Grace’s guest cottage. Being both irritating and loveable is hard to pull off without being maudlin; Raphael got it done because we always knew the character was exactly where she wanted to be. Call it Guest Cottage Empowerment.

Kelvin Harrison Jr., too, brings us a heartwarming and nuanced performance as the supporting character upon whom much of the plot depends, so I can’t say much because spoilers. Suffice it to say he’s a pleasure to watch and a great vocalist, too.

And this brings me to the final delight of this movie: Tracee Ellis Ross’s performance as the vocalist on her character’s songs. Of course, we all know she’s Diana Ross’s daughter. Of course, we all know she’s a mega-talent in her own right with the range she’s shown on Black-ish. Still, the vocals were so amazing in this film that the first thing I did as the credits rolled was to check if she’d done her own singing. And, she definitely had. Maybe there is a world tour in her future!

The High Note is available on demand.

Kelvin Harrison Jr. on Being Single and Quarantined