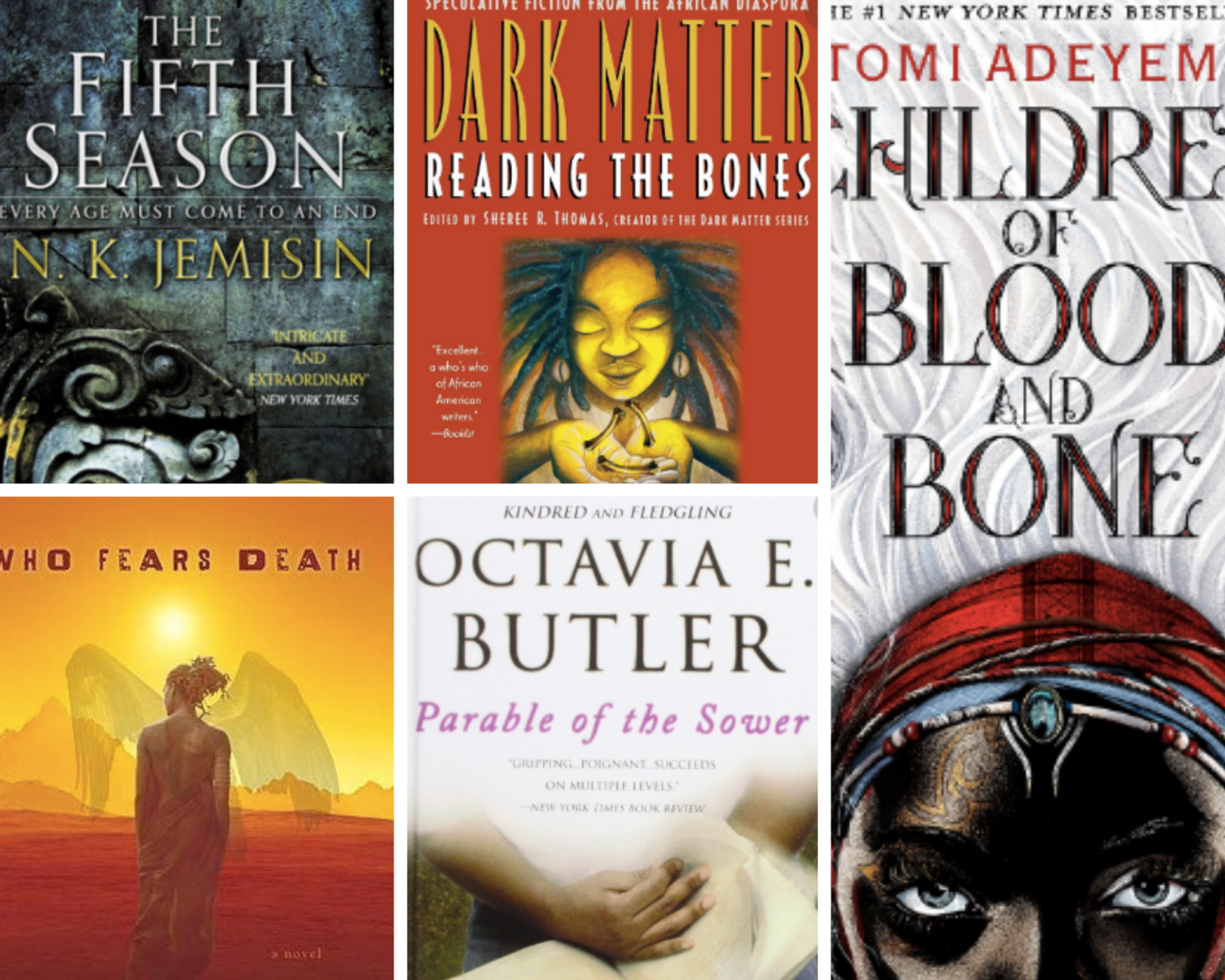 In honor of Black History Month in America, I see it only fit to celebrate the Black authors that have shaped my perception of the world both critically and seeing myself reflected in fandoms people like me have often been excluded from.

Black science fiction (also known as SF) isn’t just about the representation of its socio-political commentary brought to life by storytelling.

Today we are far from short of Black SF authors that are blessing the bookshelves of public libraries and schools across the world. It isn’t surprising to know that historically Black writers have been undermined and underrepresented. Diversity in publishing is lacking but that doesn’t mean it’s not there. Earlier this month Barnes and Noble were rightly criticized for its use of ‘literary blackface’ where they saw it fit to reimagine classic children’s novels like Peter Pan and The Secret Garden with people of color. As opposed to showcasing actual books written by people of color.

In 2019, I challenged myself to only read science-fiction books that were written by Black women, and immediately it changed my perception of the genre forever. I discovered the likes of Octavia E. Butler, Nnedi Okorafor and Tomi Adeyemi. Women that wrote about the intersection of race, class, gender, and sexuality.

The first sci-fi novel I read by a Black author was Who Fears Death by Nnedi Okorafor, I was recommended this masterpiece by my sister who said I would love it. It was the first time I was exposed to an alternative form of fiction that put African and a Black heroine at the center of the story. Through Okorafor’s words, I felt seen and heard. This only entertained my hunger for more and so I went looking. Unfortunately, living in Australia — the lack of representation in literary fiction is prevalent. I didn’t have the luxury of going to my local bookstore or library and asking for recommendations, I had to actively search for it. So, I did, on Goodreads and online.

I was blown away by the number of Black SF writers who had received praise for their work and influenced the genre for generations after them. Regardless of their talent, they were not showcased nearly as often as their white peers. I was introduced to Black science fiction through community and I see it only fit to do the same, in honor of Black History Month, here are a few books to get you started on the genre and decolonize your perception of sci-fi.

1) Who Fears Death by Nnedi Okorafor

Set in post-apocalyptic Africa it follows the heroine Onyesonwu a child of rape. She embarks on a journey of tradition, true love and spiritual mystery.

Okorafor’s gift of storytelling is incomparable.

2) Children of Blood and Bone by Tomi Adeyemi

They killed my mother.

They took our magic.

They tried to bury us.

The Legacy of Orisha novels is captivating and ambitious. They celebrate blackness and tell the tale of love and hate.

The year is 2025 and the world has become absolute chaos and little hope for the future.

Butler herself said “the book is not about prophecy but rather a cautionary tale.”

Butler does for Black folk in SF what white people have been doing for a long time.

A collection of SF stories and essays by Black authors.

Including everything from Charles Chestnutt’s 1887 tale “The Goophered Grapevine” to over a dozen stories from 2000. Other authors: Samuel R. Delany, Octavia E. Butler, and satirist Ishmael Reed.

It’s a strong composition to Black SF that has gone unacknowledged for too long.

5) The Fifth Season by N.K. Jemisin

It starts with death, with a murdered son and a missing daughter.

It starts with betrayal, and long dormant wounds rising up to fester.

Jeminsin’s work is slow and steady but gripping to its emotional core, a must-read for SF lovers

When reading science fiction by white authors I found myself looking from the outside in, attempting to relate and insert myself into an experience that did not resemble my own.

In attempting to understand why I felt this way I came to the conclusion that great literature is relevant and reflective of its society and people. It deepens our understanding and connection to what we read because we see ourselves in it. Most science fiction resembles whiteness, and when people of color read these books, we develop a sense of imposter syndrome forcing ourselves to identify with the protagonist yet always feeling inadequate because of internal self-doubt.

Reading becomes a form of escapism, where we read to escape our maybe boring, difficult of overwhelming reality. Black people are unable to find escapism in white literary fiction because it reaffirms that white hegemony that feeds our anxiety. More often than not Black writers are futurist and this makes for more captivating storytelling because it is relevant to lived experience.

As Black people, if we’re going to read science fiction why not let it be Black writers that capture the intersections of our lives and respect our existence. In the words of Octavia E. Butler, Black science fiction and fantasy offer futurism rather than escapism. Exploring the African diaspora and critiquing social structures and investing in social change.

Do yourself a favor this year and read Black, I promise you won’t go back.