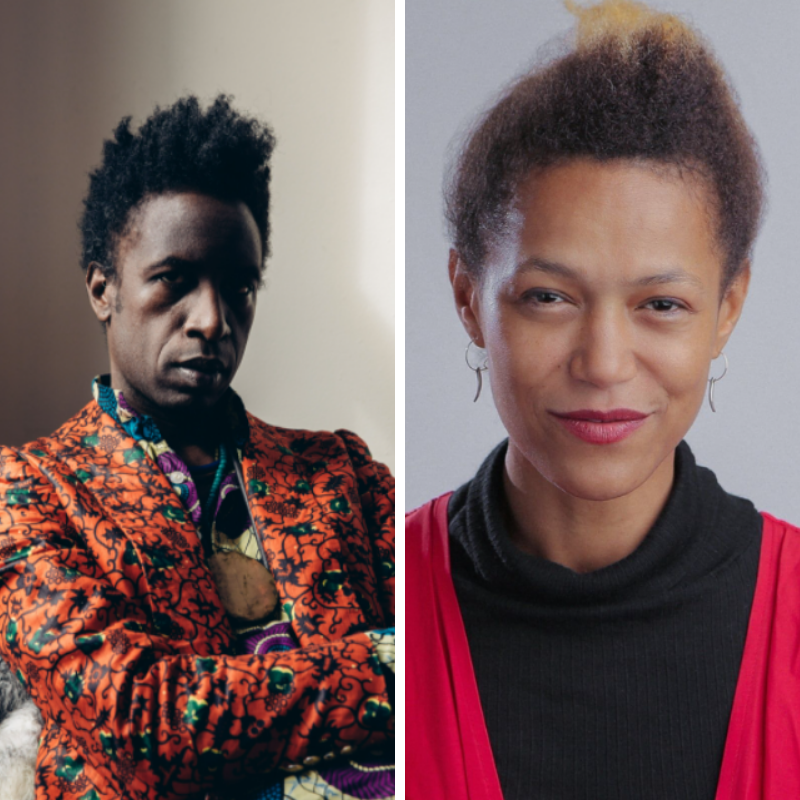 Saul Williams’ Martyr Loser King comes to life in his and co-director Anisia Uzeyman’s Neptune Frost — an Afrofuturistic tale about Neptune, an intersex runaway (Cheryl Isheja and Elvis Ngabo “Bobo”), and Matalusa (Bertrand Ninteretse “Kaya Free”), a coltan miner grieving the murder of his brother Tekno (Robert Ninteretse). BGN had the pleasure of interviewing the directors of Neptune Frost Saul Williams and Anisia Uzeyman about the nuances of representation and violence.

I love the play with gender throughout the movie. Were there any transgender or intersex actors present? Not every intersex person is trans, some intersex people are cisgender, but my question still stands.

Saul Williams: In terms of representation in the film and any trans actors, no. We had someone who is intersex work with us in the animation department. However, the entire cast has a role in representing different aspects of this grand picture. Half of our cast are Burundian refugees and arrived in Kigali in 2015 because of the unrest there.

There’s a character named Elohel [played by Rebecca Uwamahoro] who is an amazing actor, director, and activist in Rwanda who was outed. The way we ended up meeting them was [at] our office. They said, “I’d love to be a part of this film.” We thought they would work behind the camera, [but when] we heard their story, [we asked them to play Elohel], a character that was initially portrayed by a dude.

Anisia Uzeyman: We didn’t typecast for many reasons, [one of them due to the stigma] over there. It was a conscious decision. A political decision. Not everywhere is the same.

Williams: Anisia and I started conceptualizing this project when we worked on a film as actors in Senegal in 2010/2011. A film directed by Alain Gomis called Tey.

On the ground in Senegal were the protests against the government there.

We watched kids using smartphones and Beats headphones while participating in the local culture — coming home from school, building a drum, and participating in a dance competition in the neighborhood. The fusion of modern technology and seeing [they engage in] an ancient form of communication was very inspiring.

On The Continent, there were several of anti-gay and anti-LGBTQ laws enacted in countries like Uganda, Kenya, Tanzania, and many other countries. American evangelists were flying over there with money and saying: “We can’t pass these laws in the U.S. So, we’ll give you money to pass it there.”

We learned about e-waste camps. These e-waste camps were next to the mines, where the coltan, tantalite, and cobalt were — these things that our modern technology is based on.

When we talk about the fluidity of the narrative, it’s a reflection of that.

The film does a great job of not making it a linear narrative.

Williams: Right. That was the approach. There’s a possibility of endangering people by making the call out that your questioning implies. We didn’t shoot a guerrilla film. We had to get clearance from the government and local authorities. Not until we came back [to the U.S.] were we extremely vocal [about the subject matter] we touched on in the film.

Uzeyman: For quite a time now, I have personally reflected on the violence shown on our bodies. How those images are carried repetitively in ways that are not making anything go in a direction that is more interesting, inventive, or giving [the viewer] anything to think about. Now, more and more in the digital world in which we live, there is more brutality to see.

For me, to the place where we shot the film, I don’t want to show violence like that. I want to find a way to convey that, yes, violence and death are a part of our stories and beings. But in terms of image, I think there is something to be reassessed and reimagined [effectively]. I have seen people wait for [exploitative] images and be numb to those images. I don’t like to be the person who is feeding that weird desire to see our bodies.

We had a wonderful discussion with our set designer [and costume designer], Cedric Mizero, about why we didn’t want to film a gun.

Williams: Yeah, we didn’t have a gun on set. The “guns” in the film are wooden sculptures.

Uzeyman: Being in sci-fi freed us. Freed us of all of those [exploitative] representations. There is not one drop of blood [seen in this film]. It was a very amazing space of opening possibilities.

Williams: That is so much in the intentionality of Anisia because it was something she was vocal about. It’s clear with the magic of cinema! There’s no reason why we have to go in the direction of glorifying any violent acts. You can imply enough, and it’s enough.

Why specifically a film? Especially with stage musical directors [such as Stephen Hendel and Lin Manuel-Miranda] being executive producers?

Williams: Initially, the project was envisioned as a graphic novel and a stage play. We were looking at Broadway! Anisia and I, with our background in acting, thought we would create something that would be a vehicle as actors.

When Stephen Hendal, the producer of Fela!, read what Anisia had started putting together as a stage play, he came back and said, “I would love to support this, but I think this would make an amazing film!”

We were resistant at first, but then we thought how much it would open us up if we got out of the way.

Where did the initial resistance come from?

Williams: Just from when you birth an idea, and you’re like: “It’s this!” Then someone says, “Actually, it could be this.”

If a film takes place somewhere, I want to be there. I want to hear the language. The excitement of getting out of the way is that we’re not in it anymore [as actors]. Anisia is shooting it, I’m writing, we’re translating, and we’re able to introduce wonderful talent. Show a landscape that has hardly ever been seen through a cinematic gaze that belongs to us.

That was the excitement in shifting mediums. It allowed us to focus on, all puns intended, the bigger picture! In that instance, Anisia is doing her research on the color palette and [other research]. Or when I’m making music. We’re able to dive magnificently.

Uzeyman: We went there in 2016 to shoot the scissor reel, and that’s how we met a lot of our cast and crew. Their enthusiasm and understanding of that story, envisioning themselves in it, was a big part of what inspired us to tell the story and film it.

Williams: It’s so different from what they’re normally asked to portray.
Be sure to watch Neptune Frost in theaters June 3, 2022 in New York City or June 10, nationwide!