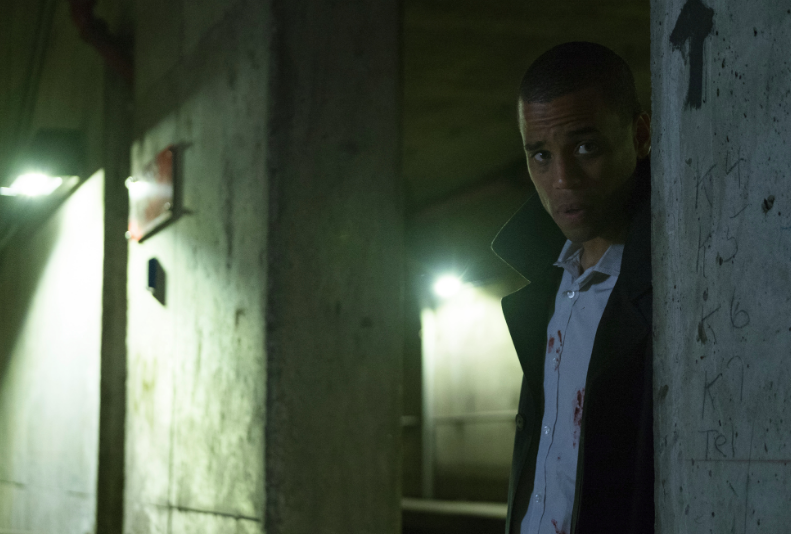 In a melanated version of the ’90s horror remake Jacob’s Ladder, expect to see the same story but with a completely different ending.

Filmmaker Adrian Lyne, best known for racy movies with sexual themes like 9 1/2 Weeks and Fatal Attraction, took a different turn to a new genre in his 1990 film Jacob’s Ladder. The premise of both the original and this newest version starts the same. The titular character Jacob is a war veteran suffering through bouts of post-traumatic stress.

When Jacob begins to see ghastly visions and bizarre hallucinations that continue to haunt him, he seeks to find the answers to what he is seeing. In the original film, Jacob was played by actor Tim Robbins who was a war vet turned postal worker living in New York City. He’s estranged from his wife who has full-time custody of his two children and lives with his girlfriend (Elizabeth Pena). The updated 2019 version directed by David M. Rosenthal upgrades Jacob (Michael Ealy) to a surgical doctor working for a Veterans Affairs hospital.

He and his wife (Nicole Beharie) have a new baby named Gabe. If you’re familiar with the original version, Gabe was Jacob’s son (Macaulay Culkin) who was tragically killed in a motor vehicle accident. Jacob is reminded incessantly through fleeting thoughts of the past of Gabe and his experiences with him. In the new version, Jacob is haunted by memories of wartime. The original version also had Jacob enduring moments of being triggered to his active military days, but it seems the new Jacob has something far more sinister that is distracting him from his peaceful existence with his wife and baby.

The pieces of the puzzle start to slowly fit around the curved edges as an old army vet colleague named Paul Rutiger tells Jacob something is amiss with the patients at this VA hospital. And Paul tells Jacob that Jacob’s brother Isaac (Jessie Williams), who he had believed was dead, is very much alive.

As if the plot couldn’t get any weirder, when Isaac does return in Jacob’s life, Isaac is not the man he once was. There’s something off about him, and Jacob has the duty of trying to figure out what happened. Isaac too also served in the war and may be one of the many patients affected by a drug used to help ease PTSD — with horrifying adverse effects.

As someone who has watched both versions, while there are some similarities between the protagonists and the main theme of the narrative, the film does take a climactic turn that separates it completely from the original. The plot twist is one you won’t see coming and brings an interesting and compelling end to every character in the story.

There are some pros and cons to each film. First of all, the pro here for those of you not interested in seeing the original film is that you don’t have to have done so in order to understand this film’s context. Jacob’s Ladder holds its own just fine as a standalone and brings to the screen a unique narrative. The original version, during the time of its release, received mixed reviews from critics. The only arc to the plot that gave Jacob some substantive character development was the conflict of his personal relationships. Tim Robbins’s Jacob was an estranged husband, while his love life with his live-in girlfriend was hanging on by a thread. She served as a foil to Jacob’s choices and morality. This dramatic irony was a pro to Jacob’s complex decisions and motivations.

And it can be said the con to the recent version is while Jacob’s marriage to his wife is simple and throws no monkey into the wrench of Jacob’s journey, that is replaced with his tempestuous relationship with his brother Isaac.

The title Jacob’s Ladder does refer to the biblical story in Genesis 28:12 — a dream of a meeting place between Heaven and Earth. However, the only biblical thing about both films are the names of the characters. There is a scene in the original film that alludes to scripture, but neither film aligns with biblical themes. In the Bible, Isaac is Jacob’s father and Jacob’s brother (who he’s notably known to have a contentious relationship with) is named Esau.

In an interview with Micheal Ealy, he stated he knew actor Jesse Williams a couple of years before they made the film. His favorite moment while filming was with Williams in the bedroom scene specifically, while the two brothers decompress the insanity that is happening all around them. It’s one of his favorite scenes.

Ealy, who also serves as executive producer for the film, also added that Nicole Beharie was his top pick. Beharie plays a strong supporting character for Jacob and Isaac but doesn’t add much of a three-dimensional substantive arc to the main theme of the plot — unlike Elizabeth Pena in the original. Hopefully, this is just one of many more feature films to come starring Beharie, who is buried treasure in Hollywood.

The film is likely to gain a significant audience at the box office. Ealy himself has proven himself to be a box-office magnet, and producer Will Packer’s resume (love ’em or hate ’em) has a history of commercial success. It’s likely that in this out-of-sight-out-of-mind age of cinema that most people will come to the theater with a fresh pair of eyes and no expectations. And for a remake of this kind, coming in with an open mind is definitely worth it.