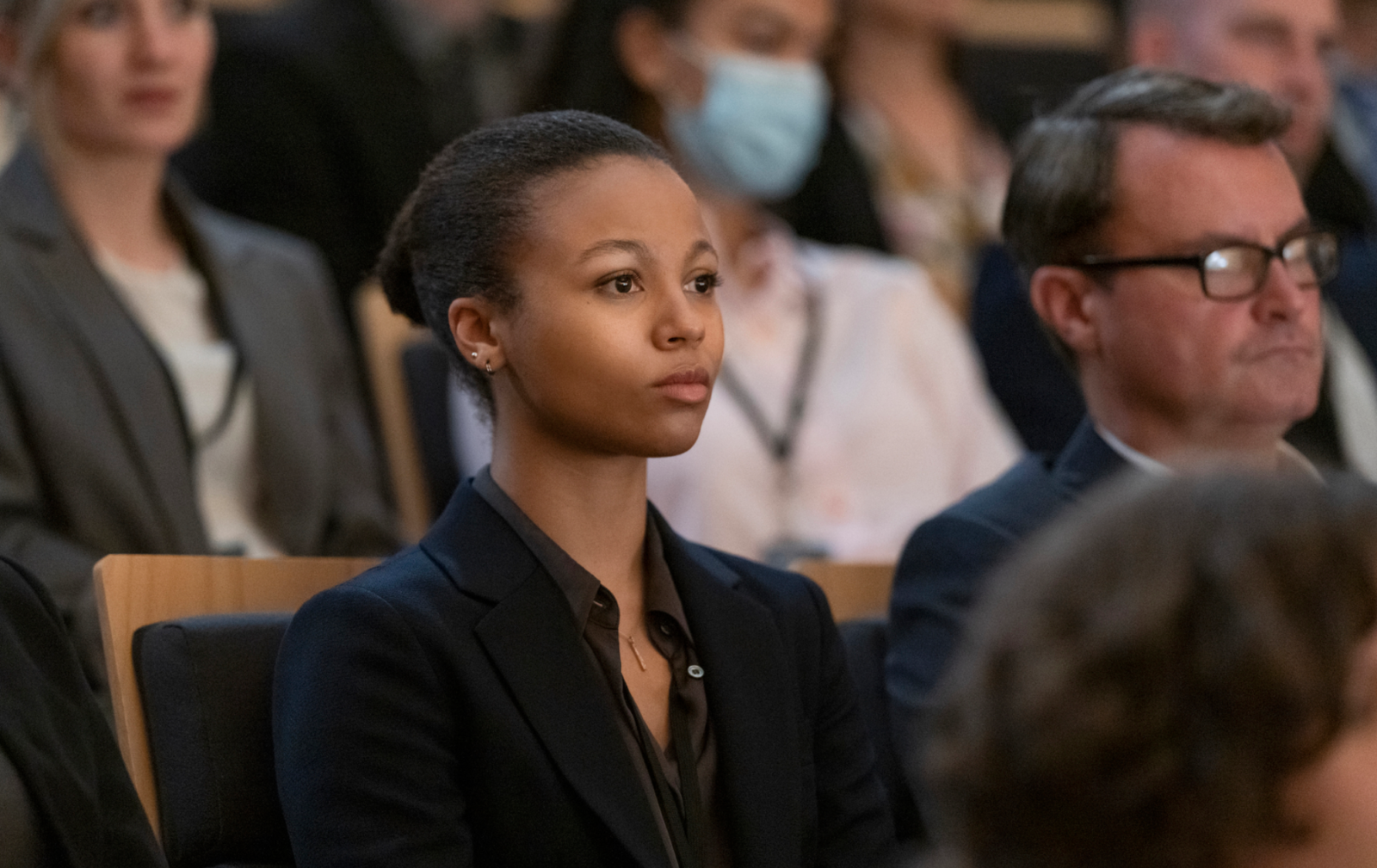 Myha’la Herrold is a self-described small-town girl from San Jose, California, a place that is technically large with a population of 1.029 million, but one Herrold describes as “glorified suburbia” — not exactly the place for an expressive child with dreams of living in New York City.

After making that move and even performing on Broadway, Herrold landed the role of Harper Stern, a determined (that is, low-key brutal) young financier at a merciless London firm on HBO/BBC Two’s co-production Industry. BGN sat with Herrold via Zoom to discuss the show’s upcoming second season, the cost of emotionally draining scenes, and Industry’s political messages — or lack thereof.

How would you say this season finds Harper changed? Especially in the premiere?

In Episode 1, Harper has spent a year in true isolation. [She’s spent the] pandemic in a hotel room where she has her rig computer so she can work and she’s been doing everything virtually, but she’s loving it. She’s thriving. She’s in a controlled environment where she doesn’t have to deal with any of the personalities or personal relationships that really stunted her on the trading room floor. And as quickly as anything, she’s demanded to come back into the office.

So she’s wrestling with the anxiety of having to confront those past relationships, particularly Yasmin, and hoping that she can come in with a clean slate, which is just not the case. So she tries to be kind and come at it as if nothing happened and is immediately struck with all these different people and relationships letting her know that she’s not off scot free. And then she decides, “Okay, well, if I can’t play this next game, then I’m going to go right back to what I know works for me. I’m going to focus on this business and do what I have to do to get what I want.”

With that mentality in mind, do you consider Harper something of an antihero? Maybe even a villain?

No! I mean, I think the idea of “antihero” is kind of fabulous. I love that that is in the arsenal of things being said about her, but when I approach any character, especially those who are going through as much as Harper’s going through, I do it with as little judgment as possible, because if I judge them, I wouldn’t be able to play them honestly. It would be a commentary on this type of person. So I think Harper is like a lot of people who [are] in a lot of pain and have a lot of fear and feel very much alone in the world. And so she does what she needs to do, or what she believes she has to do, just to keep her place in the world. I personally would not go about it in the way that she does. I choose not to lie and backstab and cheat people, but that’s me, that’s not her. She gets what she needs to get done.

Oh yeah, there’s definitely a little backstabbing in the show. Just a bit. As far as that goes, what is it like working on a show where the characters can be so devastatingly cruel to each other? Is there ever a moment where you go, “These guys are just the worst”?

It’s safe. We all love each other. Like, Marisa [Abela] and I are very good friends. So whenever we get a scene where, like, we’re throwing some nasty language back and forth, it’s always a good time because we can push the limits of how far we get to go with that. And it’s very playful and very exciting. You know when someone really says something and it stings and you’re like, “Oh, that really hurts me to watch”? You know it’s going to make for great TV.

How are you able to wipe the slate clean after doing emotionally charged scenes like some of the show’s many confrontations?

Well, the nice thing about working with people who you have a mutual love and respect for is that you both come out of it and you’re like, “I’m here for you. We’re good.” You kind of do have to remind yourself to shake it off. I’m pretty good at that for the most part, emotionally and mentally. I can [hear] “Cut!” and I’m Myha’la [again] and I’m good, and it’s all fine.

The things that really stick with my body are like the high anxiety or the tears. If I have to hyperventilate enough to manifest a panic attack, my body is still doing all of those things physically, and it leaves a sort of footprint. There’s a sense memory there. So, it’s not connected to anything in my life, but my body has gone through that physical trauma. So sometimes, usually, I’m just exhausted. I’m just so tired after because I have to pretend like it’s real.

What did working on the show, especially working in London, teach you about cultural tensions in the UK you might not have known much about previously?

Yeah, I think that the biggest thing was learning that [there’s] this perception that Americans are more focused on race and English people [and] British are more focused on class. And after enough time working there, I made my own observation that I feel like, yes, it’s class, but they’re intrinsically connected. You can’t completely disconnect race from class. So that’s an interesting conversation to have. David [Jonsson] and I talk about that all the time being the two Black actors on the show [in Season 1]. We talked about that often.

Keeping with this cultural angle, would you say that Industry is anti-capitalist or anti-greed, or both? Assuming you can’t have one without the other?

Industry is neither. It is inherently Switzerland. It’s neutral in the sense that the show does not try to make a commentary or take a stance on any of that except to paint a picture of the world. It invites the audience to have these exact questions. It allows the people watching it to have the discussion as opposed to watching it and saying, “Oh, they’re trying to tell me this about capitalism,” or, “They’re trying to tell me this about greed.”

And, finally, which character is your favorite addition to this season?

Oh my gosh, that’s really hard to say. I can’t pick an actor because all of the new people that we added this season are 10s across the board and we love them. But I was particularly excited to meet Harper’s brother. I was very excited to meet JD and to see what was going to happen between them. And I had no idea how that was going to go. But, yeah, I was really excited to explore that side of her and get to know a little bit more about her family.