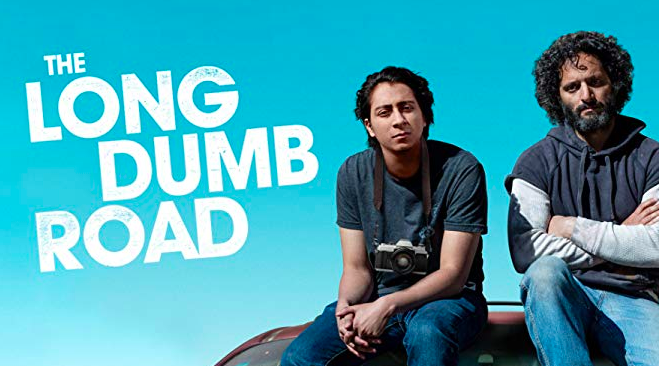 The Long Dumb Road follows 19-year-old Nat (Tony Revolori) as he takes a journey across the United States to Los Angeles to attend art school. Young and sheltered from the world, he is unfamiliar with the rules of the road and the social etiquette accompanied with it. Along the way, Nat’s car breaks down. In search of someone to fix it, he encounters Richard (Jason Mantzoukas); a mechanic who quits his job because he is fed up with his boss and city. After helping Nat fix his car, Richard asks for a ride to which Nat reluctantly agrees. The two take a ride to Los Angeles together, getting into trouble along the way.

The climax of the film comes when Francois (Ron Livingston) robs Nat and Richard, taking their things and leaving them on the side of the road. At this point, Nat has been threatened multiple times, forced to give up his car, and is stressed about school and how he is going to get there. An old park ranger notices Nat and Richard on the side of the road and gives them a ride to the nearest police station. While heading there, the ranger recounts the time when she thwarted off an attack from a bear by bolstering her image proudly, standing tall, and throwing anything she had at it until it ran away.

Immediately after arriving at the police station, Nat decides to grab a bite to eat and hitch a ride with Richard to Albuquerque to confront Francois. They sneak in, grabbing the keys and take off when Richard decides to defecate on the front porch. Francois stops him and begins beating him to the ground. At this point, the Nat must decide on leaving Richard or helping him. Nat grabs a vase and smashes it over Francois’ head, allowing the two to escape. Finally, Nat says his final goodbye, leaving Richard and catching a bus to Los Angeles. In the end credits, audiences are left with Richard exploring a casino (likely in Las Vegas).

Written and directed by Hannah Fidell, The Long Dumb Road provides an engaging plot with compelling characters, whose personalities were highlighted through fleshed out dialogue. The entire road trip felt like one big conversation between Nat and Richard. In the beginning, we saw good sides of each character. Both were charming in their own way, the topics of conversation generally light enough for the dialogue to leave the audience laughing and intrigued. A character shift occurred when Nat and Richard visited one of Richard’s old flames. Angry and drunk, the audience sees a side of Richard only hinted at earlier, and it was ugly. From that point on, Nat was intimated and sick of being around Richard and it showed.

Though Richard proved to be the same, Nat was clearly worn out, not as excited in his conversations or caring about the world around him. After all, his character wants to get to Los Angeles. During the film, several events occurred that showed the character’s qualities more, and they were fitting. Each event was authentic and didn’t feel jarring in comparison to the pacing of the film. The color grading and visual tone of the film seemed to fit the movie overall, matching the energy of each respective character whenever they appeared on film. Nat had a gloomy, more secluded color grade when he was the focus, while Richard had a warm more orange color when dominating the screen. Although the film had strengths, there were weaknesses as well.

Richard as a character doesn’t have many redeemable qualities. Virtually throughout the entire film, he takes advantage of Nat’s kindness and is largely responsible for his extended delay in reaching Los Angeles. Not only is Richard a parasite, but he is also mildly psychotic. He believes he is in love twice during the film, and both times shows how crazy he is either in how he treats the person or how he handles the person treating him. Only once in the entire film is he someone the audience can appreciate outside of dialogue with Nat, and it’s in the beginning when he repairs Nat’s van. The contrast between Nat and Richard is stark when at the end of the movie the audience is left with a sense of relief, feeling that Nat is better prepared to take on the world. Richard’s character remains flat throughout the entire film. He doesn’t change, and his redeemable qualities are canceled by his actions and craziness.

On top of that, the execution of the ending is something left to be desired. Audience members are left hoping that Richard was walking somewhere to find shelter, or hopefully do something better for himself and find a new life. Instead, we are left with a disappointed end credits scene of him at a casino. Overall, not a bad watch. Not exactly a movie to watch on a date, but perfect for sitting on the couch during an evening to yourself.

The Long Dumb Road is currently streaming on Netflix.