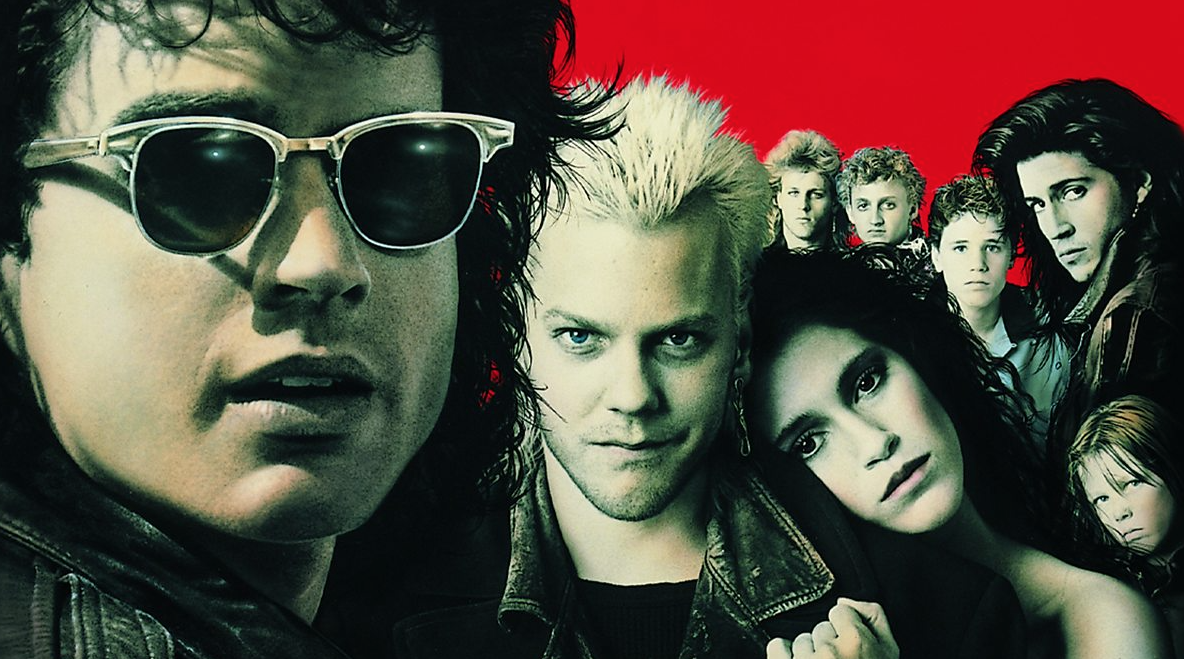 Welcome to Santa Carla, the murder capital of the world and home to a colony of vampires who changed the face of the genre in Joel Schumacher’s 1987 modern horror classic The Lost Boys. Partially inspired by J.M. Barrie’s Peter Pan, The Lost Boys interprets Peter and his merry mischief-making gang of youngsters as bloodsucking creatures on the prowl for fresh meat to join their rag-tag coven.

Unlike any of the other on-screen vampires who had come before, The Lost Boys features young, hip, and hot revenants who ride motorcycles, setting an entirely new paradigm for vampires that continues even now 35 years later. But every vampire story has its roots in Bram Stoker’s seminal epistolary novel Dracula, and it’s through this lens that Joel Schumacher’s queer subtext in the film becomes actual text.

The Lost Boys follows recent divorcee Lucy (Dianne Wiest) and her sons Sam (Corey Haim) and Michael (Jason Patric) as they move in with her eccentric taxidermist father (Barnard Hughes) in a fictionalized version of Santa Cruz, California. While hanging out at the beach boardwalk, Michael is instantly smitten with beautiful Star (Jami Gertz), who dutifully leads him to David (Keifer Sutherland) and his long-haired comrades Marko (Alex Winter), Dwayne (Billy Wirth), and Paul (Brooke McCarter), thus beginning Michael’s dark initiation into the group. Meanwhile, Sam meets the Frog Brothers Edgar (Corey Feldman) and Alan (Jamison Newlander) who warn him about Santa Carla’s undead problem, an encounter Sam laughs off until Michael starts changing in the worst ways.

As her sons butt heads with the underworld of this picturesque beach town, Lucy gets a job at the video store run by kindly Max (Edward Herrmann), who shows her the romantic attention she’s been craving since her breakup, only to discover in a fabulous bait-and-switch that Max is in fact the leader of this house of vampires and his designs had been to convert Lucy’s entire family so they could finally have a mother figure to round out Max’s coven.

The Lost Boys has long been recognized as an essential example of queer horror, but for anyone still on the fence here are some final nails in the coffin of the theory.

Through Dracula glasses, the head vampire Max corresponds to Count Dracula, whose source blood controls the lives of all those who drink from him and whose death reverts the halflings back to human. In Stoker’s novel, Dracula doesn’t only feed from and transform Lucy Westenra, he also converts her mother Mrs. Westenra, and it’s here that Sam and Michael’s own mom becomes a key role in a Dracula reading of The Lost Boys.

If Max is Dracula, then it follows that David and the gang are Dracula’s brides, those who were sent to tempt Jonathan Harker and keep him trapped in Dracula’s castle. In The Lost Boys we have five brides instead of three, but their function remains the same: to snare new members in their web using whichever wiles work. For Michael the pull of both David and Star is enough to enchant him. The male members of the vampire gang are a perfect balance between masc and femme, with their crop tops, luscious and long side-parted hair, elaborate jewelry, and of course the long French manicured nails that emerge when in their feeding form, very much like Stoker’s descriptions of Dracula’s brides in the book.

However, in Dracula, Jonathan never drinks the brides’ blood, but eventually his wife Mina does drink of Dracula and quickly begins her transformation. Where Michael begins The Lost Boys as a curious Jonathan Harker soon tormented by Dracula’s brides, Michael quickly shifts into a gender-swapped Mina Murray with a twist, becoming a willing participant in the blood-drinking that turns him into one of them. In this reading, where David and the boys are now openly recognized as gay icons, through a Dracula lens Michael becomes bisexual, interacting with both David and Star to excavate his queerness in a way that was far ahead of its time, through long lingering glances captured through director Schumacher’s sensual camerawork. I was not the least bit surprised to learn that Star was actually written to be another of the lost boys, which explains why her character feels so out of place among David, Marko, Dwayne, and Paul.

The Dracula connections don’t stop there. As the intrepid vampire hunters, Sam and the Frog Brothers correspond to Dr. Seward, Arthur Holmwood, and the brash Texan Quincy Morris, all of whom together along with Jonathan Harker and Mina eventually destroy the monster and revert the world to rights. “We are fighters for a higher purpose,” Edgar Frog intones, and this echoes the language from Stoker’s novel as the heroes go on their quest to stop Dracula once and for all. The grandfather is a version of Dr. Van Helsing, revealing he has known about Santa Carla’s vampire problem all along when he shows up to save the day. Star is a version of Mina’s best friend Lucy Westenra, and young Laddie (Chance Michael Corbitt), the child that Lucy eats in the book. We even have a representative of Dracula disciple Renfield in the oiled up sax player (Tim Capello), whose chant in The Lost Boys is “I still believe,” instead of “The blood is the life.”

But Michael isn’t the only character offered a bisexual reading through The Lost Boys. Young Sam has a poster of Molly Ringwald from The Breakfast Club on his wall, but directly in front of Sam’s bed is a full-length poster of a sexy Rob Lowe sporting a revealing crop top. And in Max’s video store, there is a huge poster display of Hector Babenco’s 1985 film The Kiss of the Spiderwoman, which is about two men sharing a prison cell, one who is openly gay and the other a straight man who falls in love with him. Joel Schumacher also offers the viewers several montages various counterculture kids around Santa Carla like punks, stoners, new agers, and hippies — with their gender-bending hair, make-up, and outfits — juxtaposed with yuppie beach goers, tourists, and Mexican day workers, to visually represent the clash of cultures, sexualities, and gender identities, setting a perfect carnivalesque backdrop for a queer band of vampires also working in the mix.

While there are aspects of The Lost Boys that have dated it, like the old-school video games on the boardwalk and some of the gnarlier fashion choices worn by Sam and Lucy, 35 years later it remains ahead of its time when we acknowledge the important queer representation seen on screen, which is only heightened through a Dracula lens. The only criticism I have to offer is how unfortunate it is that all these queer vampires are killed by the film’s conclusion, reverting the narrative to a state of heteronormativity that feels jarring rather than satisfying these years later.

There are constantly rumors floating around about a reboot or requel. If any of those ever materialize out of the fog, maybe the queer vampires have space to finally win in the end, breeding an entirely new vampire paradigm from Schumacher’s foundation.