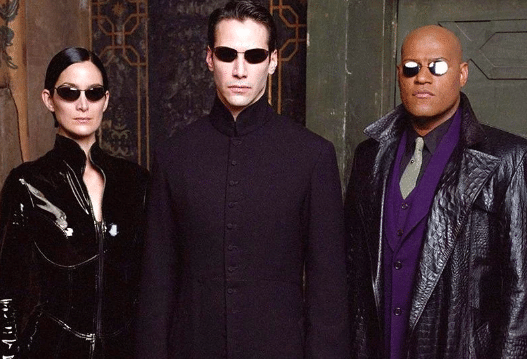 When Lana and Lilly Wachowski’s love letter to cyberpunk The Matrix hit cinemas in March of 1999, it was an evolutionary leap forward for movies that changed the entire framework of modern cinema.

The stop-motion accompanied by revolving camera angles may seem ubiquitous now after two decades of good and bad homage. But in that first moment where Trinity (Carrie-Anne Moss) jumps into a crane position and the camera swirls around her was unlike literally anything anyone had ever seen before in 1999. And as the rest of The Matrix’s marvelous narrative about the dangers of artificial intelligence and the power of faith unfolded, our minds expanded as The Wachowskis took 1999’s technology creatively further than anyone else at that time. Or even now, for that matter. Those of us who had the privilege to see The Matrix in the cinemas when it first came out were transformed by the experience on so many levels. That transformation resonates even today. 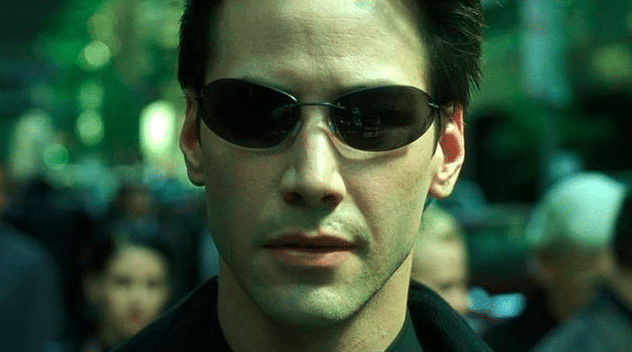 The Matrix introduces us to Thomas Anderson (Keanu Reeves), a corporate programmer with his very own cubicle by day, a world-famous hacker by night who goes by the handle Neo. One evening Neo receives a mysterious communiqué with obscure instructions on finding out more about the enigmatic Matrix he has been trying to uncover. He follows a white rabbit (tattoo) to an industrial club where he meets Trinity, another world-famous hacker who can connect him to Morpheus (Laurence Fishburne), the inscrutable leader of an underground tech disruption group. Or so Neo thinks.

The next day, Morpheus calls Anderson at work to warn him away from men who look like federal agents but are far more sinister than any government representative. Anderson tries to escape their clutches but is foiled by heights. We begin to question the nature of our own reality as these agents, spearheaded by Agent Smith (Hugo Weaving), perform impossible feats on Anderson — like erasing his mouth without even touching him — before inserting an organic-looking piece of tech made to look like a jellyfish into his belly. The Wachowskis camera work dismantles our perceptions as it also melts the fourth wall right in front of our eyes. 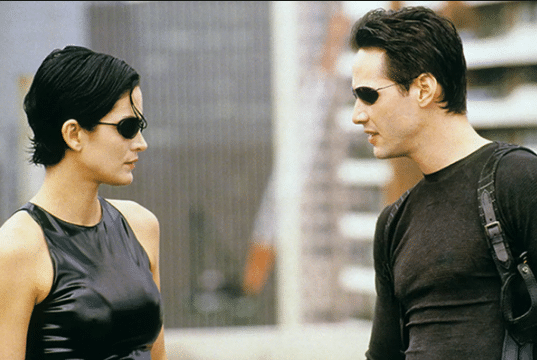 Anderson thinks it was a dream, and so do we. Until Trinity shows up again with her crew and extracts the creature from Neo’s (six-pack ab bearing) stomach. Free of this spyware, Trinity and company bring Neo to an abandoned building where he finally meets the famous Morpheus in person. In yet another iconic scene that has been homaged almost to oblivion by now, Morpheus offers Neo a choice: he can take a blue pill and go back to his double life. Or he can take a red pill “and see how far down the rabbit hole goes.” Neo chooses red.

When he wakes up, Neo finds himself in a kind of replacement womb, his body filled with wires and ports. He is surrounded by millions of the same. After being flushed from his pod, he wakes again aboard the Nebuchadnezzar, a human outpost ship manned by others rescued from The Matrix. Neo learns his entire life was a lie. Artificial Intelligence went self-aware a hundred years before and had been using humans as a sustainable source of energy production. The Matrix is a false reality that keeps human slaves passive and productive. Welcome to the real world, Neo.

Watching The Matrix in high definition in 2019 is as incredible an experience as it was in 1999 in the theatre. It’s easy to forget just how prophetic the movie was, and how much about modern society it predicted. In the days before the proliferation of the Internet and screens, the glitches in The Matrix were weird. But now, the stutters and buffering that were so odd in 1999 are now a daily part of life. I imagine that the people who saw this on DVD or streaming for the first time might have thought those moments in the film were accidents or a slow wifi connection. The Matrix talked about unplugging before this act became a part of modern self-care. 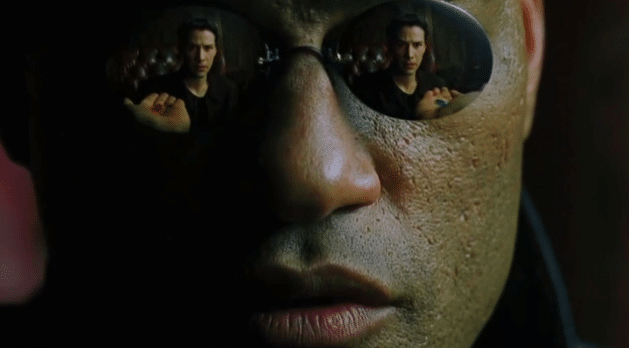 The Wachowskis’ use of rotary phones and now almost non-existent phone booths as key visual cues remain a loving nod to the world that us older folks grew up in that has long since moved on into sci-fi territory, both in The Matrix and in real life.

However, there are two stains on The Matrix’s remarkable legacy. The first is that while the description of the film online correctly labels the directors The Wachowski Sisters, the actual closing credits of the film do not. Once more for those in the back: Deadnaming is bullshit and the studio needs to rectify this offensive error immediately. I’m writing them a letter. You should too.

The second major issue with The Matrix is the grotesque amount of gun violence that today — and for gun crime survivors like me — is too much to handle. I actually had to mute the film for a while because I just couldn’t take all the shooting. It’s also unfortunate that The Matrix in effect normalizes and to an extent romanticizes extreme gun violence with the peppy techno song that accompanies it. Also, Neo and Trinity enter the building in black leather and latex, long trenchcoats covering their arsenals strapped to their bodies. The Columbine Massacre took place just one month after The Matrix came out, and the shooters were openly inspired by this movie. Now, two decades later, the events in Columbine and that particular scene of The Matrix are inextricably and terribly linked through real-life trauma and horror.

It is also super weird that Morpheus’s notion of the red pill is now used by right-wing extremists once they manage to convert someone to their twisted and hate-filled worldview. They missed the entire point of this movie, just as with the notion of snowflakes from Fight Club. We really need to reclaim those terms and concepts, both of which were coined by members of the LGBTQ communities as coded satire.

Themes of fate vs free will, physical and mental slavery, the fragmented self in a capitalist society, identity and destiny, the very nature of our reality and perception, and key notions about faith drive The Matrix, along with dismantling notions of binary existence. The Matrix isn’t just a movie, it’s an entire philosophy that also examines metamorphosis and personal transformation to mirror The Wachowskis’ own personal journeys as trans women. Neo claims his new identity even as the agents, representatives of a heartless and soulless world, continue to deadname him in an attempt to destabilize and control him once more. Neo’s flex as he embraces the entirety of his own power is a beautiful metaphor for accepting ourselves and allowing ourselves to shine as we were born to. These messages are eternally relevant and resonant.

Ultimately, The Matrix is a film about a mixed race man of color as the chosen one and savior of humanity, created by two transgender women. Twenty years later and The Matrix and its sequels remain the only films of their kind. Here’s hoping in another twenty years this won’t be the case any longer.