With the progression of each episode of The Mayor, Courtney eases into his role more and more. “In Buyer’s Remorse,” he learns that sometimes, public opinion matters.

After Kitty (Jillian Armenante) walks into the office after being soaked by the rain due to the lack of a bus shelter, Dina comes in to complain about Courtney’s lack of a receptionist. When he asks if she wants the job, Dina lets him know in no uncertain terms there’s “no chance in hell” she’d work for him — said lovingly of course. The news comes on and Courtney’s first job approval ratings are in, they’re low — like Trump levels low — at 23%. 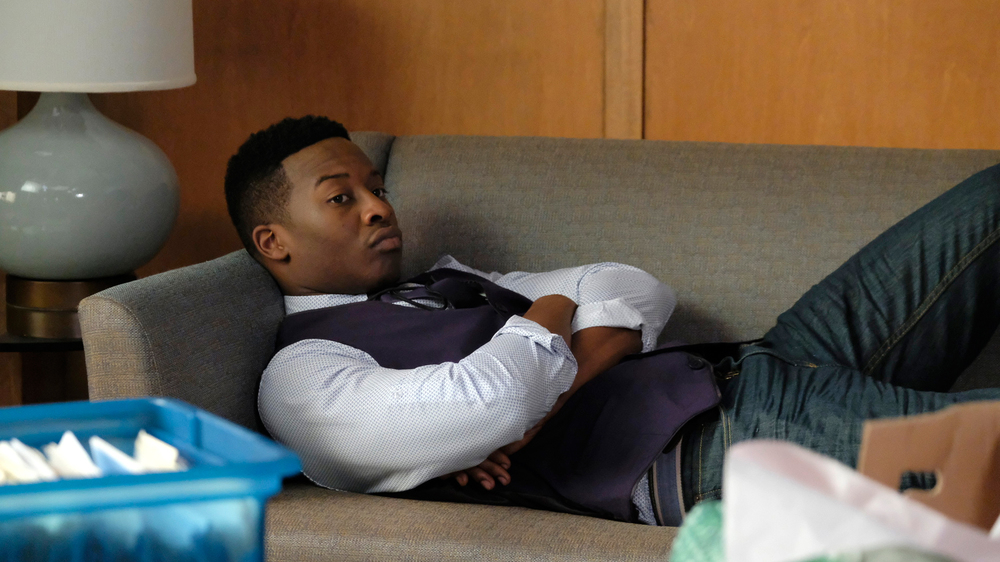 The Mayor has proven at times, to be quite subtle with how they address the current political atmosphere in America, while at other times it’s as obvious as shade on a sunny day. One of these moments of supreme shade came when T.K. refers to the news the “lying, dishonest media… sad,” after he’s caught on camera saying that Courtney might not have what it takes to be mayor.

To increase his popularity with Fort Grey’s citizens, Courtney decides he needs to do something for them — and what better way than to build bus shelters? When seeking funding for his new project, Gunt turns down the proposal (as expected), after threatening to steal Courtney’s idea of course.

While Courtney is worried about how to raise his poll numbers, T.K. and Jermaine are carrying out their own personal campaigns to curry favor with their friend and new boss. Dina reminds them they’re best friends above all else, and even as Courtney becomes more popular, he can’t leave them behind because he still lives with is Mama and rides a bicycle.

Feeling embarrassed after being shamed on live TV, Courtney returns home feeling discouraged about his abilities to be an effective leader. Dina takes him for burgers at their favorite spot and serves up another inspirational speech. She reminds Courtney of situations where he seemed to be losing and turned them around to benefit everyone involved, and he can do the same with being mayor.

Realizing that sometimes compromise is the only way to go, Courtney proposes to share credit for the project with Gunt, who agrees as long as he’s given credit for the idea. With each episode, Courtney grows into his role as mayor. Sure, there will be many hiccups along the way, but Courtney is up to the challenge. With his mother encouraging him, a strong support system and the willingness to learn, I’m sure his approval rating will continue to rise.