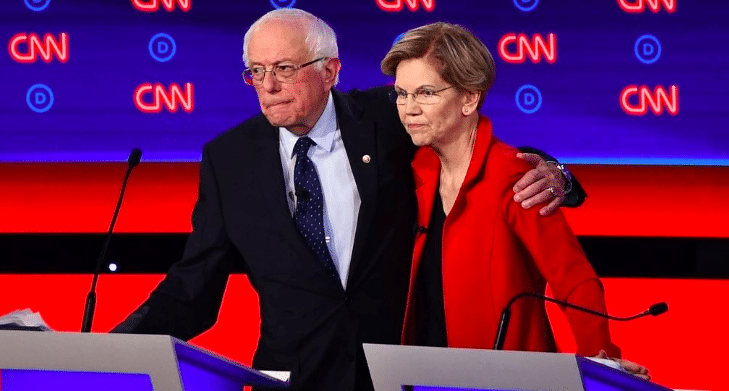 The first segment of night one of the Democratic debate zeroed in on healthcare.

Framing the opening questions of the debate on the issue of single-payer healthcare was an obvious effort to draw the contrasting philosophies between progressive and moderate Democrats.  It is also important for voters to understand which faction of the party aligns best with their values and needs.

One of the most divisive issues on the table within the Democratic party is the issue of Medicare for All. The plan that was popularized by Bernie Sanders during his 2016 campaign and inevitably rose the Vermont Senator to fame, has become a contentious and controversial issue within the party. Why is Medicare For All (also known as single-payer) so difficult to articulate to the American people?

What exactly is Medicare for All?

Let’s travel back in time to 1912. Teddy Roosevelt was running for President and one of the issues on his platform was health insurance. He didn’t win the Presidency and the issue quickly dissipated away. In 1945, Harry S. Truman redirected the focus on a radical idea of a national health care plan funded for all Americans. During his term, again in 1947 and 1949, Truman pushed for this bill shut down by Congress. It can be argued that strong lobbyists such as the  American Medical Association and the American Hospital Association were to blame for this. 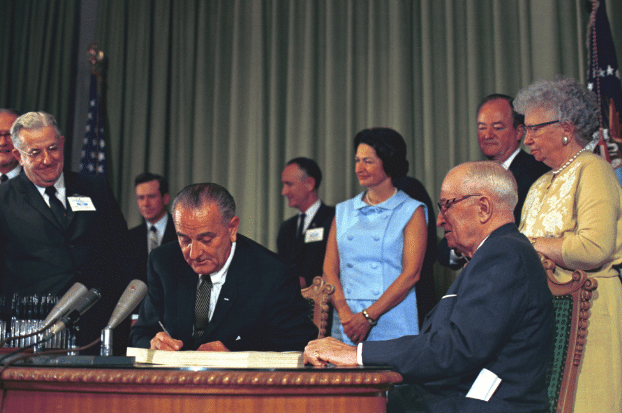 Fast forward to 1965, President Lyndon B. Johnson was the leader of the free world and Americans over 65 found it incredibly difficult to get private health insurance coverage. On July 30th of that year, he signed legislation that gave birth to Medicare and Medicaid programs. The programs protect elderly Americans at retirement age and some with disabilities to receive the healthcare they deserve. My mother is a recipient of this program and without it, I can’t begin to imagine the kind of medical debt she would be in if she didn’t have it. Medicare is a government-run socialist program that has been funded by taxpayers for 40 years.

That small deduction you see coming out of your paycheck for social security — also helps to fund Medicare. So the concept of medicare on its own is nothing new and Americans have been paying for it all along. However, where it gets dicey on the issue is expansion.

Super progressive liberals like Bernie Sanders want to push for Medicare to cover all citizens including lawful permanent residents and immigrants. His philosophy is that health care should never be a privilege only afforded to those who can pay for it, but a right for all Americans to get the care they need.

How Is Medicare Polling with Americans?

As Medicare continues to become a growing hot topic among both liberals and conservatives, its popularity is resonating with voters. According to a poll conducted with the Henry J Kaiser Foundation, shortly after the second round of Democratic debates, there was a modest increase in support for a single-payer system. 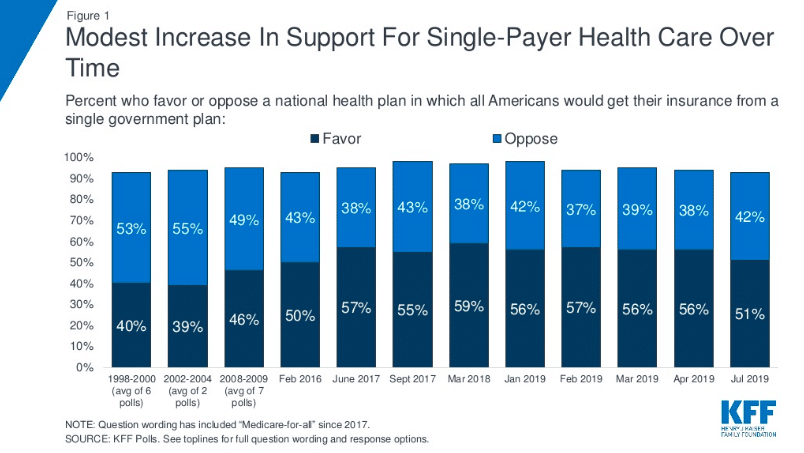 For the 44 million Americans who are not currently insured and the 38 million underinsured — the idea of a single-payer system is music to their ears. However, for the rest of the population of employed Americans who pay for private insurance through their employer, they may hesitate at the idea of shifting from a private system to a public one. Here are some concerns Americans have about getting rid of private insurance.

“Medicare-for-All will knock me off my current plan and I can no longer see my current doctor.”

Senators Bernie Sanders and Elizabeth Warren support Medicare for All. Sanders, who has been the most vocal and clear about his plan, want to expand the current medicare system already in place. This expansion will include lowering prescription costs while eliminating premiums, co-payments, and deductibles — not removing doctors or plans.

“Why should I support Medicare-For-All? My taxes will go up!”

One of this biggest Republican talking points is the issue of raising taxes on the middle class under a single-payer system. Both Sanders and Biden have not articulated this clearly enough to voters and even in the spin room, which is why the answer to this has to put in layman’s terms for people to truly understand what this means.

Make no mistake, under Sanders plan, paying for universal health care will not come cheap. The cost will bring a $14.3 trillion-dollar tax increase over the next ten years. Wage-earners will incur a 4% payroll tax increase. There will also be taxes on capital gains, wealth taxes, and bank taxes.

So let’s break it down. Premiums, deductibles, and co-pays would go away with a single-payer system. And a cost decrease on prescription meds.

Also even under our current private health care system, in some cases, Americans are still not properly cared for with the coverage they do have.

This may vary from one person to the next since these variable costs depend on how often you visit the doctor and use your insurance. However, even if you are in perfect health and never spent one iota of a second inside of doctor’s office, as an employee under a private health care plan, you’re still paying a premium on your policy.

I can’t help but think of Chris Rock’s joke in the epic comedy concert Bigger & Blacker about taxes and insurance. One thing we all hate and is inevitable for every American. Death and taxes. As for insurance, the idea of in case sh*t doesn’t happen — shouldn’t I get my money back?

If you think about Chris Rock was on the leading edge of the healthcare debate. Remember in his special Never Scared where he talked about for-profit drug companies promoting ads coaxing unsuspecting viewers to buy their medications?

Oh and we can’t forget about how pharmaceutical companies “ain’t no money in the cure, the money is in the medicine. That’s how you get paid, on the comeback.”

There’s still a debate to be had about how to pay for single-payer, but one fact remains that healthcare in this country should not be a for-profit system made to keep a small fraction of people and corporations wealthy — while disenfranchising a significant amount of people. And while some reformation has happened in the last decade with the Affordable Care Act, it’s still not enough to help the millions of Americans who can’t afford healthcare.

Maybe if politicians used Chris Rock soundbites to explain policy it would come across more clearly to Americans. While they’re at it, they might as well use his clips to cover gun control and racial injustice.

Bernie Sanders is Surging, but Women of Color Are Still Largely Undecided — Why?

Why Joe Biden Is Bad for Black People