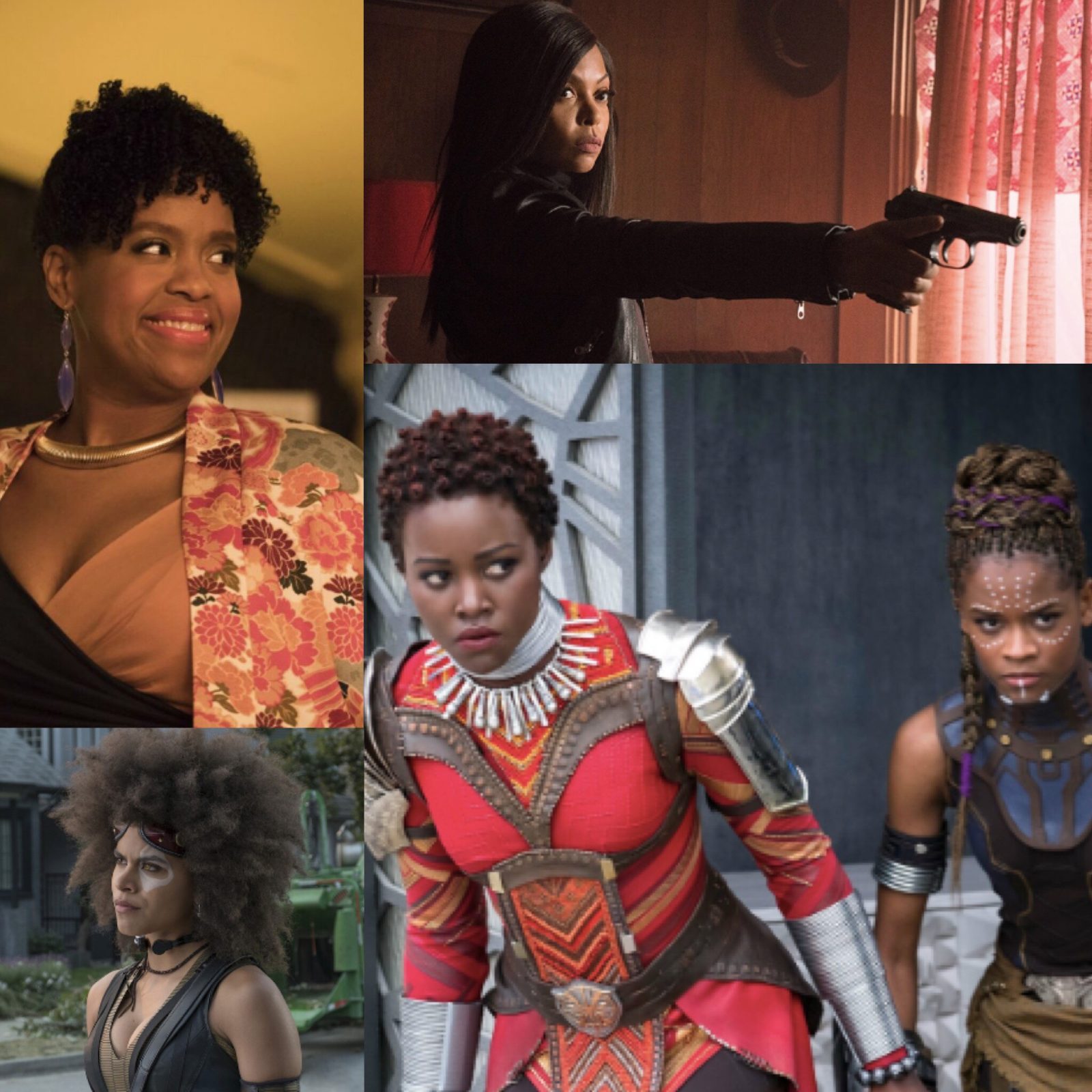 If you made it to the movies or tuned into top TV shows this year, you probably got to know some awesome Black female characters. From Black Panther’s record-breaking success for black film and for industry representation in general to the continued success of shows such as Insecure, 2018 gave us a lot of Black female star power — who also happened to play badass characters.

This is important. These characters showed Hollywood that strong Black female leads can do well in the box office and on our TV screens, because contrary to popular belief, they don’t just appeal to other Black females. Both black women and viewers from a variety of other backgrounds are able to relate to them, which is why sharing these stories is beneficial to all audiences. As we gear up for 2019’s releases, let’s take a look at some of the most memorable of those characters from 2018.

This is a character I have thoughts about. Mary Goodwin (Taraji P. Henson) is a big character in a small film. One of Henson’s most significant roles this year, Mary literally had potential for days. She’s basically the Black Evelyn Salt. Because the last thing we need is another Russian spy even if I did love Red Sparrow (sorry, Jennifer Lawrence).

Although Proud Mary didn’t give its titular character sufficient development, she makes this list simply for her gun-wielding badassery combined with a cute friendship with a little kid, Danny (Jahi Di’Allo Winston). Mary Goodwin has depth as a character, and I wish it had been explored. Nonetheless, it was wonderful seeing this film make it to theaters at all, and even more amazing to see Henson kick some major ass – albeit in a poorly-done modern rendition of a Blaxploitation film.

The Women of Black Panther

The leading women of Marvel’s Black Panther were definitely the highlight of the movie for me. Between their impressive fighting skills and flawless natural hairstyles, Okoye (Danai Gurira), Nakia (Lupita Nyong’o), Ramonda (Angela Bassett) and Shuri (Letitia Wright) provided a positive representation of Black women that we rarely see onscreen.

My favorite scene in the entire film is probably when Okoye and Nakia kill it (literally) fighting Klaue’s men in South Korea with T’Challa. It was so intense that Okoye actually snatched her own wig.

Aside from being funny and powerful, this moment is a true symbol of the film’s power: as a Black woman, I have always felt the pressure that having long (straight or wavy) hair equates to beauty. In the midst of the natural hair movement, the women of Wakanda show us otherwise. Okoye’s annoyance with her wig is important: she has more important things to worry about. Like leading the army of the king of Wakanda. No big deal.

I’ve heard a sequel featuring these characters is in the works, and I’m praying it’s true. Hollywood needs more of these powerful images.

Detroit, Sorry to Bother You

I still have a lot of thoughts about Detroit, many of which have been voiced by others. Whether or not you agree that her activism is authentic or effective, it is undeniable that her character is dynamic. She wouldn’t have stirred up so much conversation otherwise.

A key takeaway about Detroit that makes her a badass is the fact that she literally doesn’t give a f***. I, therefore, find it immensely hilarious and kind of meta that all of the film’s viewers seem to have thoughts about a character who fundamentally doesn’t care what people think. Was the middle finger bikini not clear enough?

We all know and love Kelli (Natasha Rothwell) from Insecure. I’m pretty sure I literally laugh every time she’s on my screen because she’s so funny. Kelli is one of the best examples of the show’s ability to bring depth to a character who could easily be very flat; simply the “plus-size friend” or the “comedic relief” – or both. However, she is afforded a great deal of growth, especially in season three. We see this most notably in her fight with Tiffany, which sheds a light on the difficulties of adult friendships.

I also love Kelli’s role as Issa’s financial advisor, highlighting her career as a successful accountant. Even though Insecure largely focuses on how Issa’s life is in shambles and follows her attempts to grow, it simultaneously highlights Black female success with Kelli and Molly. These ladies clearly have their shit together and are making serious bank. Let me emphasize that we have a lawyer and an accountant on our hands. Cheers to fiscal responsibility in the Black community. Build that generational wealth, sis!

Kelli is the friend who makes us say #goals in every sense of the word. Let’s hope we get to see more of her personal life as well as her career in season four.

Veronica Rawlings (Viola Davis) actually scares me. In the best way. Did we expect any less?

Davis’ performance in Widows was a not-so-subtle reminder that she’s the best in the game. It was a celebration of sisterhood and bravery — and she pulls it off flawlessly. I loved Veronica particularly because a lot of viewers expected her to be another version of Annalise Keating. They have similarities, sure — but Veronica is a force to be reckoned with all on her own. She’s real and has vulnerabilities as well as strength.

I also believe the true hallmark of a good crime film is when people spend so much time deciphering its ending. Widows definitely left its viewers #shook, including me, and I wouldn’t be surprised to see a sequel in the works down the road.

Domino (Zazie Beetz) was the hero we didn’t know we needed in Deadpool 2. Familiar with Beetz’s dry humor in Donald Glover’s Atlanta, I was pleasantly surprised at what a great fit she was alongside Ryan Reynolds’ wry hero. Then again, I probably shouldn’t have been.

Beetz’s Domino is unapologetic, literally inverting the version in the comics by wearing her natural afro and refusing to shave her armpits (she’s also half Black when the original character is chalk white).

She also has a superpower that many of us (Wade Wilson included) don’t think of as a power at all – luck. Seeing it in action combined with Domino’s calm demeanor was thoroughly enjoyable, and we also got to learn a bit about her tragic background. I’m eager to learn more, so let’s hope the rumors about a sequel focused on Domino are true.

I fell in love with the CW’s latest DC series when I came across it watching Netflix with my ex. So I guess love fades but Black Lightning is forever?

As a die-hard fan of CW titans like The Vampire Diaries, it’s refreshing to see more and more diversity on the network. I remember all too well the days of struggling with the representation of Bonnie Bennett (Kat Graham).

Therefore, when Black Lightning graced my screen, I immediately fell in love with both the characters and the story. The writers do a great job of setting up the characters and providing enough suspense to make me binge a whole season in one sitting (which may or may not be what happened).

Anissa Pierce (Nafessa Williams) is a strong woman who will literally fight for what she believes in, and she immediately wants to learn how to control her powers and use them to better her community. I admire her strength, and I also see myself in her due to her impulsiveness and passion. Additionally, she represents the first Black lesbian superhero on TV, a testament to the barriers that the show hopes to break.

There was a lot of Black girl power in theaters this year — let’s hope the momentum continues in 2019. Who was your favorite this year, and who are you looking forward to most next year?

Review: Clive and Whitney’s Relationship Is Unveiled in ‘Whitney Houston: I Wanna Dance With Somebody’