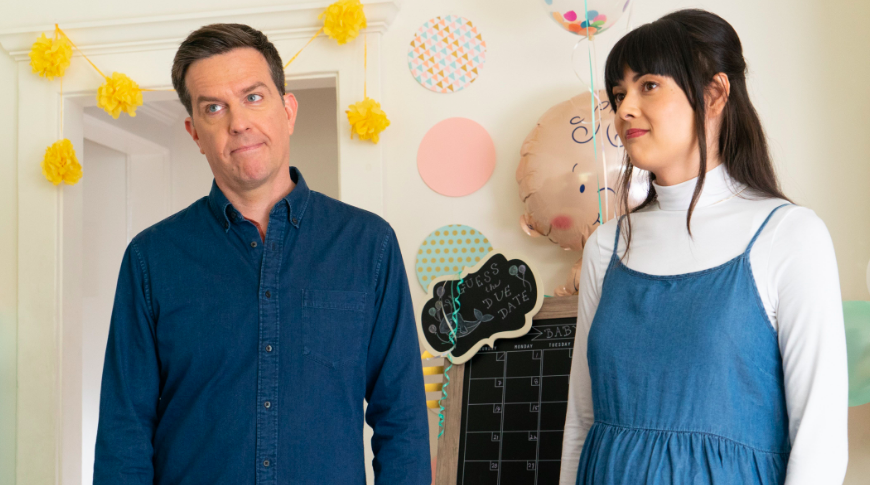 Together Together centers on a budding friendship between Matt (Ed Helms), a single father in his forties, and his twenty-six year old gestational surrogate Anna (Patti Harrison).

It frustrates me on principle that this film received a rating of R despite only having one F-bomb. My theory is that they rated it that instead of PG-13 because of how a single pregnant woman is transparent about her sex life. Youth and adults can benefit from learning about sex, the sociology of pregnancy, and the many positives of platonic friendships between men and women.

After a group session with therapist Madeline (Tig Notaro), in the beginning of the film, Matt names how he used to go to couples therapy with his previous girlfriend of eight years; how afterwards they would “eat candy, hold hands, and continue not sleeping together.” Initially watching that I thought, “Why would you say that to someone you barely know? She didn’t need to know that!” However, the movie surprised me. It builds up to this coming back towards the end by how the two engage in contact through the baby kicking or are holding one another when they’re sad or joyous throughout.

In their last group session before the baby is born, Anna asks Matt, “Would you like to eat candy, hold hands, and continue not sleeping together?” and he responds, “I thought you’d never ask.” It still warms my heart.

Not only does Together Together explore the complexities of platonic intimacy, it delves into the nuances of gender. To only state that the one nuance of gender the movie has is by casting a trans woman as pregnant is reductive and hides the truth about the erasure of trans people in media due to both cisgender men and cisgender women acting as trans people. It disregards the history of cisgender people in a marginalized role that did not align with their experiences of privilege.

As viewers watch a single man have a child by his own choice, they’ll realize how much of an underrepresented narrative that is. There is a scene where Anna looks at Matt’s collection of books on parenting that are all about single mothers. Matt states that he uses those as guidance because the only books that talk about single fathers are ones who are divorced or widowed.

At the same time, it doesn’t try to name that single mothers have it better than single fathers either. In a scene where the two are searching for a baby’s crib, an overtly smiley saleswoman (Greta Titelman) initially thinks Anna is a single mother, which causes her to express sympathy. But when Matt mentions she’s his surrogate and he’s a single dad, she expresses joy. The two imminently call her out on it, and it is GLORIOUS.

Instead of using the final closeup on Matt holding his baby, the closeup is on Anna exhausted but elated to have gone through childbirth successfully, questioning what happens next. I admire how much care the movie gives to Anna. We don’t see Matt and his baby at all in the final shot. The filmmakers don’t paint her through a negative connotation when she shares her experience of giving her baby up for a closed adoption when she was in high school. Anna also talks about how money isn’t the only reason she chooses to be pregnant for the second time in her life. She is someone who has given parents gifts of life.

I do have one gripe with the film I can’t ignore. Yes, it is amazing to have a racially diverse cast with different forms of speaking roles, including one of the leads. However, the only Black woman with a significant speaking role is Anna and Matt’s ultrasound technician Jean (Sufe Bradshaw). It sucks to continue to see Black women, particularly dark skinned Black women, in certain roles where they are purely of service to the leads (e.g. as nurses, social workers, therapists, waitresses, housekeepers, or in this case, ultrasound technicians).

Despite my qualms about that, I will name my appreciation for the filmmakers’ attempt at subverting the trope. Jean isn’t there to give Anna and Matt advice or friendly emotional support. She is there to speak freely “off the record” despite how often her job forces her not to because she is not a doctor and is assumed to not be as “knowledgeable” as one.

The mix of comedy, tenderness, and complexity in a platonic love story is what makes the film so successful. From beginning to end you will fall in love with these characters, if you’re looking for something different that is a mix of romantic comedy and buddy comedy without the usual archetypes of the two. Nicole Beckwith wrote and directed this gem; she’s a genius!

Together Together will be released in theaters Friday, April 23rd and digitally May 11th. Please watch the film’s trailer to treat yourself before it comes out! I must warn you, watching the film in its entirety may make you cry, but it’ll be a good cry.