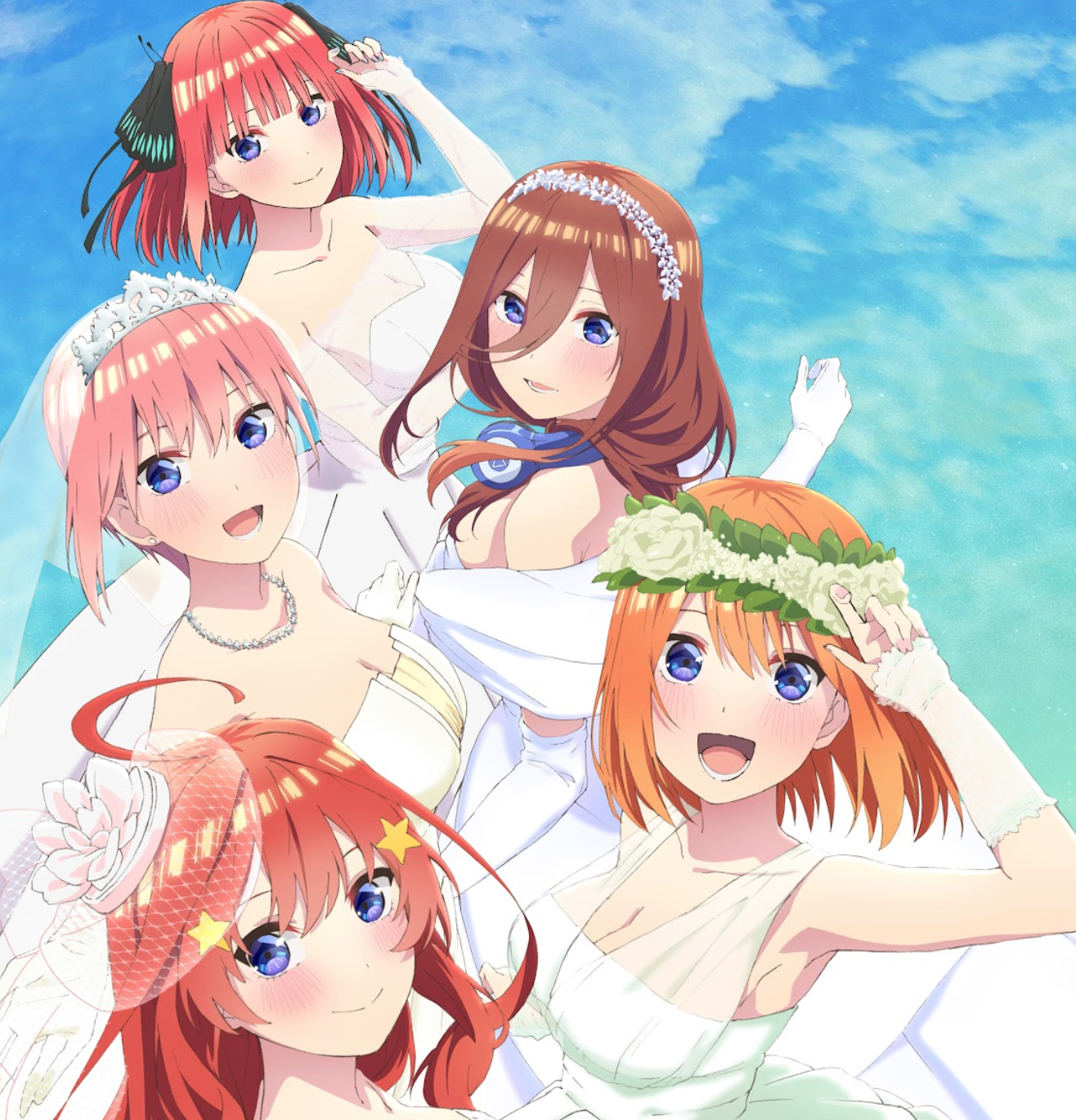 Harem anime is a big part of the anime experience. From traditional harem to reverse harem, fans of the genre like to sit back, relax, and watch a group of characters who fit into different archetypes fall in love with one clueless protagonist who doesn’t notice all of their friends are in love with them until the last episode. Or in the case of Quintessential Quintuplets, we get a nice movie to cap off the journey we’ve taken with these characters. So let’s see if The Quintessential Quintuplets Movie ends the story one a high note, or leaves romance at the door.

Starting with the plot, the movie takes place in two different points in time. We open the movie before the wedding between our main character Futaro Uesugi and one of the quintuplets, but we’re not sure which one yet. We then flash back to the main characters’ time in high school, specifically to the planning of their school festival. This school festival ends up being the catalyst for Futaro telling the quintuplets that he has in fact fallen for one of them and he’s going to tell them after the festival who he has decided to pursue a relationship with. This gives us our mystery for the movie. Who does Futaro confess his love to, and which sister does he end up marrying? Thankfully all of the sisters decide to play a nice trick on Futaro by dressing up as five brides with matching attire. Gotta keep the mystery alive, right?

The characters for Quintessential Quintuplets are so well defined and clear in their archetypes that it makes it easy to pick out one to identify with. This is especially clear when one looks at the Nakano sisters and how each one has different aspirations, interests, and personality apart from the others. This also gives viewers incentive to have one or more sisters to root for when it comes to who ends up with Futaro. The choice to make the movie a build-up to which sister Futaro ends up marrying lends itself well to how the sisters are portrayed. Not to be outdone, the man himself is quite the character. Futaro is an academically gifted young man who tends to lean into a blunt and straightforward approach to life. He can be full of himself, but that makes the moments where he’s open about his feelings hit that much harder.

The movie has such a rich and inviting color palette. Everything feels like it’s been bathed in sunlight but in a way that gives the feeling of looking out the window in midsummer. The high-definition cinematic resolution means that everything pops even more. Adding even more to the cozy feel is the music. If you’ve ever watched Clannad, the music has something akin to that whimsical but comforting emotion behind it.  This makes this a comforting watch and could very feel become someone’s comfort film.

Speaking to who this film is for, there’s the elephant in the room that this is the conclusion to a two-season series. So to be honest, there’s an entire history behind these characters that a first-time watcher would not be privy to if they were to jump right into the movie without watching the series beforehand. That said, if one were to be looking for a movie about a group of sisters who fell in love with their tutor, there’s enough substance there to enjoy the experience. However, it is advised that you go back and experience the story from the beginning afterward you see the movie. Knowing the dynamics of the cast makes each moment so much sweeter.

All in all, The Quintessential Quintuplets Movie is an experience that’s leans into the warm and inviting. Where a lot of harem anime can lean into the back and forth between the love interests quite a bit, QQ tends to be more wholesome in its presentation, and the movie is no different. So, if you’re looking for something that’s easy going and more on the sweet side, this may be the movie for you.

The filmed was first released in theaters in Japan in May 2022, while the United States had to wait all the way until December 2 to see the conclusion to the story. Though it’s sad to say goodbye to these characters, it’s nice to see Futaro find his one true bride, for the Nakano sisters to not only find a great tutor but a husband/brother-in-law, and that everyone was able to make it through their last year of high school — not to mention, at the end of the movie, the sisters are deciding on where to go for the honeymoon. So let’s raise a glass to the newlyweds and wish Futaro and the Nakano sisters a happy and prosperous future.