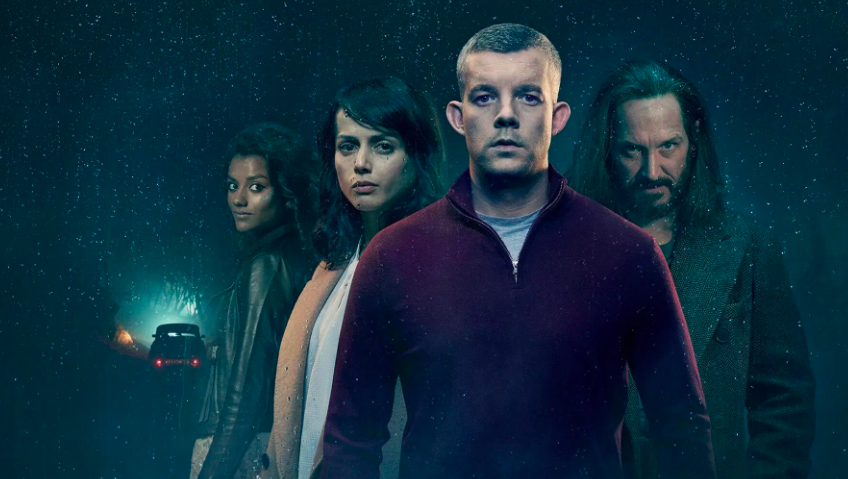 The murder mystery plotline has been used for ages. There is always a murderer trying to run from capture for a murder more horrific than words can express. However, what happens when your captor is in your own home? The Hulu mini-series The Sister, based on the 2010 book Burial by Neil Cross, explores this dynamic throughout the four episodes of the series. Through flashbacks, larger-than-life, characters and the dreary atmosphere of London as its backdrop, director Niall MacCormick displays how far someone can go to not only protect themselves, but the ones they love as well.

We first meet Russel Tovey’s character Nathan sitting in front of the television and watching the news. There are a deadly amount of pills strewn across his glass table along with a glass of water. Something on his television screen stops him from executing his plan. Elise Fox (Simone Ashley) has been missing for three years. Her sister Holly (Amrita Acharia) is begging for her sister’s return. In a daze, Nathan puts the pills away. This is where the true chaos of the show begins.

Produced by Euston Films, the show is mostly filmed at nighttime or indark settings. This contributes to the haunting and eerie vibe of each episode. Darkness has become synonymous with the supernatural — and as each episode continues, these themes become a main character. The supernatural is what makes The Sister different from the typical murder mystery. Actor Bertie Carvel’s character Bob and his struggle to separate what is real and what is not is what drives him to see his “old friend” Nathan in the first place. The belief that your past actions can manifest into your future is constantly being forced into Nathan’s mind.

The flashbacks of each episode show that simply ignoring the past is not going to work. It is essential to understanding the entirety of what happened to Elise Fox. As each flashback becomes more and more detailed, the viewer can see the panic and dread taking over Nathan. One of the most powerful emotions in the world is guilt, and slowly the viewer can see it transform Tovey’s character into his worst nightmare — a monster.

He is trying so hard to be the perfect husband. The perfect worker. The perfect son-in-law. But there is only so much one can do before secrets come to the surface. In the case of The Sister, those secrets are transforming into “mental imprint manifestations” — a phenomenon much scarier than just a noise in the dark. These secrets are not only eating at him, they are physically appearing before him, looking to be released into the world.

Another factor that drives the series is the cat-and-mouse game that Nathan plays with his wife’s best friend (and cop) Jacki (Nina Toussaint-White). In the first scenes with them together, it is blatant that there is no trust there. Even at a party for Jacki, Nathan looks like he is having to save face. The more that Jacki and Nathan interact, the more that Jacki notices what is truly off about Nathan. She begins to keep track of him while Nathan is keeping track of her. Along with trying to maintain this status of perfection, Nathan now also has to be as unsuspicious as possible while the police poke and prod at who he truly is.

What truly was heartbreaking about this series were the scenes showcasing Elise’s family. They walk and interact around their home as if they are zombies trying to find their purpose. The joy and happiness they once had now has been replaced with an eternal anxiousness for justice for their daughter. They have been waiting for three years to find any type of clue of Elise’s whereabouts. However, the person that holds all the answers is someone close to them, making the deceitfulness behind Elise’s case even more enormous.

The twists in each episode truly stopped this viewer in her tracks. What I knew about each of the characters seemed to change every minute, showing that we can truly never know the people we surround ourselves with. Nathan starts the show as a calm and well-natured man navigating life through London. At the show’s climax, I could see the physical effects of guilt and dread were eating him alive. As characters such as Bob, Jacki, and Elise’s family continue to show up and require attention or time from him, Nathan begins to lose it. How far can someone go to not hurt others before they begin to hurt themselves as well? The Sister showcases through the series that it doesn’t take long at all.

The series is surely not one of instant action. Nevertheless, if you are looking for a slow burn series that transforms into a blazing fire full of drama and edge-of-your-seat suspense, then this is the show for you.

All four episodes of The Sister are streaming now on Hulu.