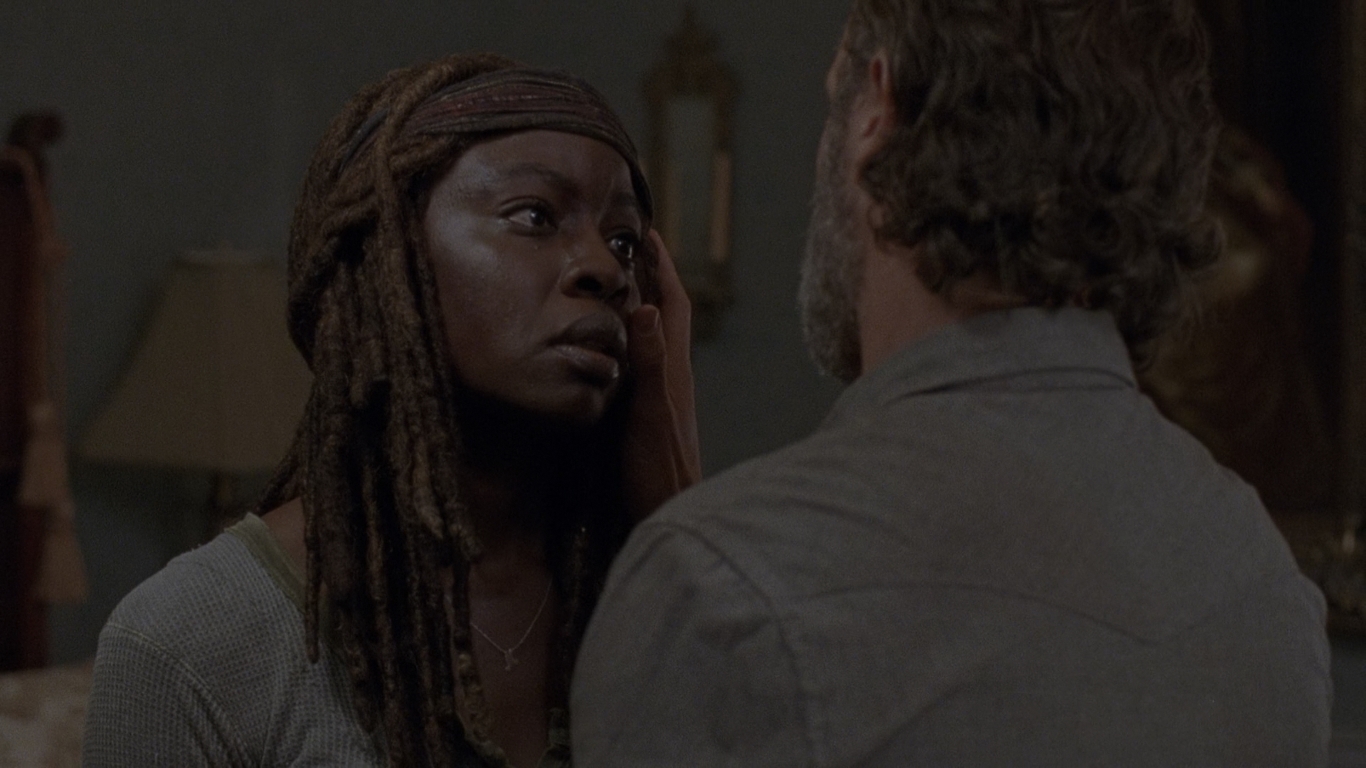 The Walking Dead wants us to believe that it’s “Still Gotta Mean Something” but I’m not entirely convinced it does when some characters stop growing and fall into the same cycle season after season.

The episode opens at the junkyard and the sound of gunfire can be heard as people scream. Jadis runs into the frame, sees one of her people lying dead on the ground, moves the body, covers her clothes in blood, and plays dead. Suddenly the scene changes to Jadis in what appears to be a container renovated by IKEA and viewers do a double take. When she’s finished packing Jadis goes to the container Rick was kept in and drags out Negan tied to a dolly.

At Hilltop, Ezekiel goes to Carol and informs her the escaped Saviors are believed to be heading for the quarry, so he’s going with Maggie and some of the others to go after them. When he mentions that Henry might be going there, Ezekiel notices that Carol doesn’t react. She says she’d rather stay behind and it’s clear that Carol is sliding back into her “I don’t care phase.” Ezekiel expresses his disappointment in Carol giving up hope and walks away.

Next, we see Michonne reading one of Carl’s letters. Rick walks into the bedroom. Seeing the tears rolling down her cheeks he gently wipes them away (oh my heart). Michonne asks if he wants to read the letter, but Rick, unable to deal, moves away and goes to the closet and takes out his infamous brown coat, aka his murder coat. Unable to even speak about what Carl said in his letter to him, Rick tries to leave but Michonne tells him that he has to confront his pain, she knows because she avoided it when the same thing happened to her.

When Carol notices Morgan preparing to leave she stops him and he tells her that he has to go after Henry because he should’ve done a better job of protecting him…well that’s what he implied anyway. Lenny James really deserves major props for how he’s handling Morgan, the dialogue for Morgan has been abysmal this season. It’s filled with incomplete sentences and awkward phrasing that if a viewer isn’t familiar with him, they would be scratching their heads in confusion. Honestly, this can be applied to almost every character this season, the actors are really trying their best with what they’ve been given.

While Maggie, Rosita, and the others come up with an old but kinda new plan to take the Savior’s ammunition, Negan is trying to convince Jadis that he would’ve never ordered all of her people be killed because he sees people as “a resource”. Of course, he does. See, the thing about Negan is that he — or should I say the writers — are trying to convince viewers that Negan is some altruistic benefactor to those in need of his help when he’s actually the complete opposite. Negan is the very definition of a sociopath. He sees people as tools that he can manipulate for his own selfish reasons. The only reason he keeps people alive is so they can do his work for him and to torment them by using death as a psychological weapon, so anything that he has to say is a damn lie and not worth retelling. Moving on.

Morgan and Carol are walking through the forest, when he suddenly starts running and calling out to Henry, he stops when he sees Henry standing with his back turned. When Henry turns around he has a hole in his throat and keeps repeating “You know what it is” and oy, I knew what it meant — Morgan has officially gone clear, again. I’m tired for Morgan, this character can’t catch a break at all, like Rick he’s been kept in a perpetual cycle of grief and mental instability with brief moments of happiness and clarity.

Many characters in The Walking Dead have suffered from severe depression in the past, and in previous seasons there have been conversations that in my opinion addressed how loss and grief can affect someone mentally, but that hasn’t been the case the last two seasons. I’m beginning to wonder if Morgan’s storyline is an attempt to address mental illness in the apocalypse and if that’s the case, well… 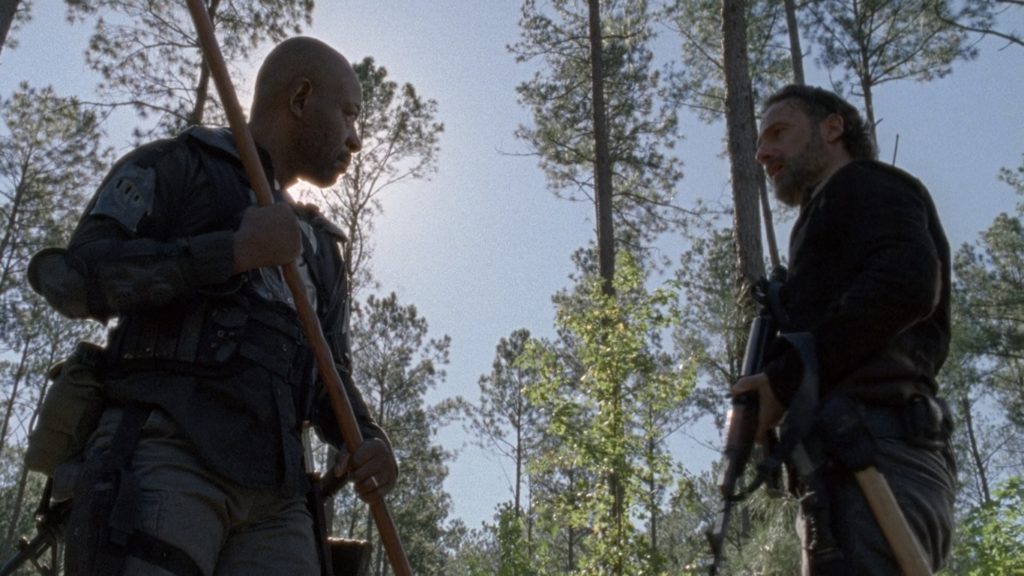 Through the magic of coincidence, Rick runs into Morgan. After a bit of tension where Morgan inexplicably held his staff up against Rick, they decide to go after the escaped Saviors together, as they’re standing over the remains of a body, someone out of frame knocks both of them out. I mean it’s not like Rick and Morgan are two men who have always been super aware of their surroundings and are always on their guard, but what do I know right? Rick and Morgan wake up in a warehouse with the escaped Saviors surrounding them.

When Rick promises to allow them to join his community, the Saviors starts to consider his offer but the dude who killed Henry’s brother tries to convince them not to believe Rick. He tells them there’s a herd approaching and they need to let him go to either fight or flee, Morgan starts screaming that “Everyone turns” and the herd appears. Rick and Morgan and using the walkers as a distraction proceed t kill the Saviors. Rick for some reason felt compelled to ask Morgan why he saved Rick that first time and Morgan says he did it because his son was there.

I guess this was supposed to serve as yet another metaphorical reminder to Rick that Carl is his reason for doing good, which I completely agree with, but keeping Carl alive served that exact same purpose. In fact, keeping Carl alive would’ve been better because Rick could show him how to become a man of honor in a world where so little of it exists. But nope, Carl is gone, Rick was made to lie about the value of his word, and the only motivation he has regarding Carl is this horrible guilt the writers are forcing on him.

In the end, Carol literally stumbles upon Henry. When they return to the Kingdom she admits to Ezekiel that he was right to not give up hope and tells him about Sophia. What I liked about this scene if that she acknowledges that it was because of the people she was with, she was able to find herself through her grief. But what I didn’t like is that this same gift isn’t being given to Morgan. I want to know why Morgan is being constantly robbed of his peace of mind, once more he’s being made to isolate himself from the people he’s grown to call family.

Rick arrives home and this time its Michonne who finds him in the bedroom. Seeing her, he immediately apologizes, tells her he loves her, she says she loves him too, they kiss and all is right in my world…for now.

OH BE STILL MY HEART. These two are literally the saving grace of this show. Michonne and Rick are the beating heart of The Walking Dead, without them NOTHING matters.

The Walking Dead shows Sunday on AMC at 9/8c. Here’s a sneak peek at the next episode “Worth”.