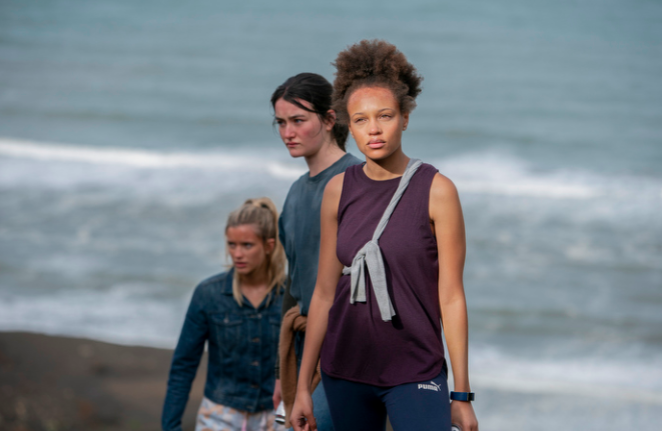 Rachel is next for the interview. She informs them that she is older than her twin Nora, had a real connection with her, but doesn’t want to talk about what happened to her. Nora will tell her story. When they were younger, it is apparent that Rachel wasn’t academically the same as her sister or her parents. On the first morning, Rachel woke up, still upset that the reason she is on the island was due to whatever her sister told their parents. Leah shows up with a phone in her hand.

Gretchen wipes her tears then makes a call. A bag of items is to be dropped off 500 miles away from the island. The girls listen to Leah about her explanation on what happened when Rachel surprisingly spits on Jeanette’s grave. Then she goes off on Leah for not waking them up when she heard the ringing phone and blames her for not getting to it on time. In school, Rachel trained hard to be an excellent diver but was told by her coach that she is not progressing due to her body size and height. It’s not that she’s not physically healthy but rather proportionally had more than others. When she gets home, she is surprised by her parents attending her national competition. She thinks that she is worthy due to her being an excellent diver, so she goes upstairs and forces herself to be sick.

While she is blowing up a raft, Rachel is joined by an apologetic Leah. She tells Leah her plans to get out into the ocean, but Leah thinks that is a dangerous idea and suggests they climb up a mountain instead to see what is around the island. Dot bumps into Fatin as she drags along a life boat then tells her on how she is going to take inventory on everything. Shelby and Toni clash over Martha’s sprained ankle and care when Rachel and Leah inform the group that they will be climbing up. However, Rachel refuses and dismisses Nora for wanting to come along and help. It would seem that Rachel ended up in an institution for her bulimia. When Nora visited her, Rachel begs for Nora to help her get out.

While Dot goes through Fatin’s suitcase, Fatin distracts her so she can grab an item out of the bag. The two girls’ bond over almost dying and struggling for the past few years. Leah, Shelby, and Rachel walk up the mountain, with Shelby assisting since she has walked up before. Once Rachel was out of the institution, she hides her condition from her very concerned sister, right before a big competition, despite promising Nora that she would be fine. Toni carries Martha to a part of the beach to put her foot in cold water. Martha keeps mentioning Shelby; Toni snaps at her for constantly talking about her. Rachel pushes the girls then snaps when they decide to take a break, causing the mirror she was holding to fall off the cliff. Leah goes for the mirror and nearly goes over even though Rachel and Shelby did their best to pull her in. Luckily Nora shows up to assist pulling her in. She snaps at the loss of the mirror then continues to climb up. While she is climbing up, we go back and forth between her climbing up the mountain and at her diving competition. When Rachel gets to the top, the view is of a bare island, no one else. When she dives, she hits her head on the way down, bleeding in the pool. Her mother rushes to her when Rachel realizes what happened. Nora arrives at the top of the mountain and holds Rachel, against her wishes, which makes her scream out when it hits her that they are alone. The two walk back together, a bit closer than before.

Gretchen is watching the footage and asks if Susan is taking note of the sisters’ changing relationship. She eventually notices that her employees are solemn on the recent passing of Jeanette and says a few encouraging words. While walking alone, along the coast, Shelby notices the bag and brings it back to the group. Dot handles the content of the bag and has Shelby give medication to Martha. This upsets Toni to the point that she distances herself. Later, Nora finds Rachel to talk about her lying about being cut from the team and not going to Stanford. Rachel reminds Nora is the reason for why she feels the way she does. At her first competition, she got a perfect ten and her parents’ reaction was one of very proud parents. That’s a look that she didn’t get a lot growing up. She wants it more.

As she finalizes the story, Rachel states that her sister wasn’t standing in front of her, casting a shadow, but rather protecting her. We don’t find out what happened to Nora but we do find out that Rachel lost her hand. Even though she lost it, she still feels her sister holding her hand.

Rachel strives to be great by any means necessary so that her parents can be proud of her like they are with the book-smart Nora, who is more like them. It is no wonder that she pushed herself beyond her limitations, with no help from the adults in her life. I am hoping that Nora didn’t die. I like her character. I’m annoyed by Toni’s behavior towards Shelby. Yes, Shelby mentions God and Jesus in every other sentence but the jealousy is ridiculous.