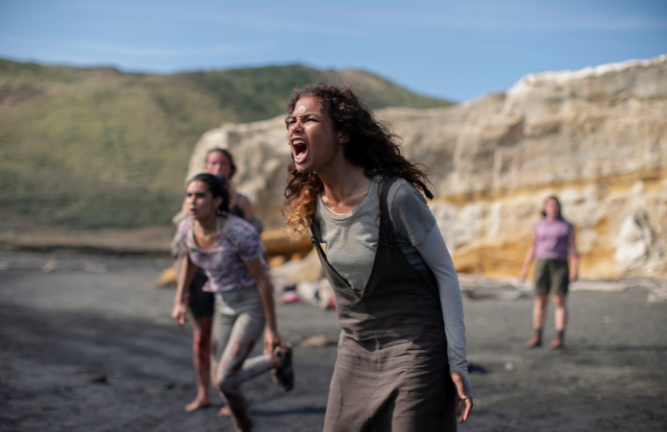 Gretchen’s voiceover talks about the one girl who has been fully briefed and the other who is a fail-safe while Nora climbs a tree to get to a phone to text headquarters. They give her tasks such as the black box, being awake to see Jeanette’s body being carried away from the beach, telling Rachel it is her fault for them being there, giving messages of Leah knowing something, repeatedly, asking what to do about Leah and being told to keep her in the dark. Nora walks Leah back to the camp, takes a pillow, and contemplates what to do next.

Toni wakes up to an awake Shelby. Shelby has a little freak out about what they did and isn’t ready to talk about it. Toni is very calm about it all and suggests that they take lychees back to the camp. The girls are shocked to see Martha walking back, covered in blood. She takes Rachel, Dot, and Fatin back to the goat. They are ecstatic to see it. Leah wakes up to Nora sitting next to her, watching her. She remembers running out to the ocean to find her mind. Nora reminds her of her walk in the woods, but when she walks away, Leah gives Nora a side-eye. She knows!

In her room, Leah gets up from her bed, walks to the bathroom, and looks at the note given to her by Shelby, saying she was right. Nora writes notes to the headquarters about Leah not remembering anything, but Nora has doubts about it. While in a summer session class, Nora notices a guy who gives an unusual answer to a question. The two walk along each other and spark a conversation. He is awkward and preparing to go to college there, while she is still trying to figure out what she wants to major in. He introduces himself as Quinn, states that he is not normal, then asks her to run off with him. Montage of them being offbeat yet cute with one another. One night, Quinn and Nora get physically close.

The pack is preparing the goat but Leah is staring down Nora. Toni and Shelby arrive back, with Shelby flunking at lying but Toni gives a decent lie. She checks up on Martha for taking down the goat. Rachel asks Martha how it felt to take down the goat but notices that Martha isn’t all right. Rachel visits Quinn and Nora, but he struggles to impress Rachel from the get-go. When he leaves to get paper towels, Nora asks Rachel her opinion of him but isn’t satisfied by her initial answer. Nora asks for the truth, which Rachel states — that he is weirder than Nora, can’t make eye contact, and talks over her. Nora insists that he is just nervous. One day at school, Quinn gives Nora a tour of their relationship and ends it by asking her to be his girlfriend even after the end of summer sessions. She declines, gives an excuse of distance, but he picks up that Rachel didn’t like him and calls Rachel uncultured and self-absorbed, which causes a rift between the two. He begins to walk away but comes back for one hug.

While they eat, Leah takes a moment to run off, looking for a tree with a camera. She spots Nora walking through the forest, so she takes off her shoes and follows. Nora texts Quinn that she misses him, one of many texts, but it seems that he has blocked her. When she checks social media, she notices messages indicating he died. Nora checks online to find out that Quinn died from a hazing accident.

Leah rushes to keep up with Nora but stumbles into a pit. Nora assures Leah that she won’t hurt her and states that she is safe. She makes a call to have Leah removed. Gretchen wants to wait a few hours before picking up Leah. There are other matters.

Nora is at a correctional facility to see Devin but is told to wait. She happens to sit near Gretchen, who mistakes her for a groupie who wants to see her son. Nora tells her why she is there to see Devin. Clearly, Gretchen is playing a role. She consoles Nora over pancakes and small talk about her relationship with Quinn. Gretchen tells Nora about how she raised her son to be better than what he turned out to be. She gives Nora a story on Devin’s experience during rush week and how the patriarchy is beyond influential to change someone then encourages Nora to see if they are thriving in this world and imagining a world where men don’t control and women are surviving and creating.

Leah fakes a panic attack as Dean walks by. She asks to step outside, and he obliges. The two have a normal conversation about family and life. Dean shows her a picture of his daughter on his phone. Leah takes the moment to try to find out more on where they are. He informs her that they are near Peru and warns her to take things down a notch for her safety. When she gets back to her room, she thanks him for the time but is really preventing the door to close and lock.

On the island, Leah fails to get attention by screaming and can’t pull out of the pit. At the camp, Rachel is happy that Nora is taking time to stop caring for crazy people, especially herself. Fatin interrupts Shelby staring at Toni with a cootie catcher. She is surprised that Fatin noticed that Shelby is pining over Toni. Martha is telling Dot about how she feels about killing the goat.

Nora meets Gretchen over pancakes again. She tells Gretchen what she wants: to help her sister not be afraid anymore, to be in love and living freely, to find her people, her strength, not always doing and fighting, and a life where she can just be. She asks for her sister to come, too. As Nora speaks, we see her bonding with Rachel. Shelby finally talks to Toni about her fears, Dot and Fatin bond, Leah gets the strength to pull herself up, and Rachel finally gets into the water, floating.

Leah comes to the camp, screaming for Nora not to move. Martha sees a shark and screams, Nora yells for Rachel then runs into the water. The shark moves closer, then we see Rachel’s body taken in, blood everywhere. The other girls just watch, scared, Leah included.

When lights go out, Leah leaves her bedroom. An alarm goes off while she’s in the hall. Dean and Gretchen go running because of a code purple. Leah finds a door and runs down a hall, but the lights turn off. Gretchen and Dean are close by with flashlights. Once Leah gets to an opening, she finds a door and walks through it. Gretchen and Dean walk into Shelby’s room, who is having an allergy attack, struggling to breathe. The room Leah is in is equipped with monitors and a file. On the file says, “Control group: The Twilight of Adam,” and Leah sees a group of teenage guys around a campfire. Leah looks into the camera and says, “WTF.”

I guess that is how Rachel loses her hand. I still don’t know for certain if Martha and Nora are alive. However, I’m shocked that Nora was pulled in so easily by Gretchen’s evil way. It makes me wonder what happened with the deal Gretchen made with Dot. Talk about a red herring.

The show is an interesting concept. I guess you can’t trust adults who do anything in the name of science. This was rough to consume. So many hard times for the girls.