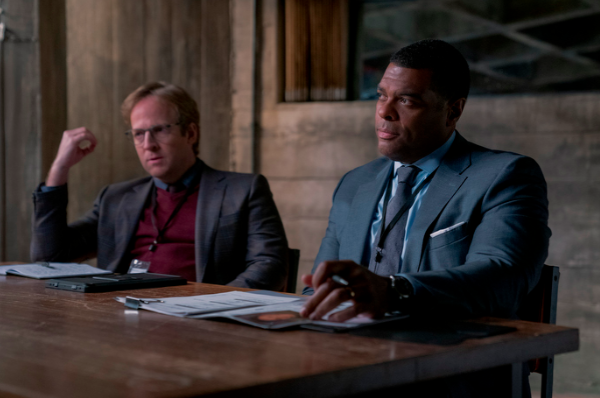 Toni walks up to a vending machine and looks longingly at the Takis before indulging happily into a bag. Dean presents a picture of the black box, which makes her smile. She tells him how they thought that it would bring salvation, but three days later, there was nothing. The girls move back onto the beach after staying in the cave. Martha’s ankle is better, and she takes the time to talk to Leah about how love feels, but Leah’s description isn’t exactly a fairy tale.

Fatin is missing social media and life, talking to Nora, who knows a lot of pop culture references, and Shelby when a bag of Takis washes up on shore. Toni and Dot both claim the bag, so Shelby comes up with an idea to have a shelter building contest. Rachel refuses to join in until Nora encourages her to. Dot and Toni choose their teams. Toni has Martha, Shelby, and Martha, while Dot has Fatin, Rachel, and Leah.

Before they arrived at the island, Toni and Martha attended school together. Toni was the star basketball player, falling in love with Regan (Bella Shepard). Shelby and Toni bump heads on what to build with Martha siding with Shelby, so Toni stomps off to get stuff. Dot takes the lead while Leah struggles with Rachel being near her and Fatin not doing anything constructive.

While walking home, Toni is offered a ride home from Regan. The two girls bond over music and family when her foster brother throws food at the car. Toni goes off on the kid, gets back in the car, and receives a kiss from Regan.

Shelby somewhat vents about Toni’s behavior to Nora, then brings up a Death of a Salesman monologue that assists her for when she gets upset. Nora informs her what the monologue really means, which Shelby can’t get behind. Toni arrives with branches but is informed that the team decided to make a lean-to as a shelter.

Regan and Toni enjoy time together at a theater when they are harassed by a group of guys who are drinking. When one of the guys get near them and calls Toni a slur, Toni jumps on him, starts swinging, and in the process hits Regan, who ends up with a bloody lip. The guys drive off at this point while Toni cares for Regan.

Dot, Rachel, and Leah are setting up their shelter but are annoyed that Fatin isn’t there with her list of items. When she finally shows up, they find out that she was brushing her teeth. They didn’t know she had a toothbrush. Fatin walks away when she gets criticized for taking time to herself, and Leah decides to insult her for being sexually promiscuous. The two exchange words, then Leah pushes her down, causing Fatin to bleed, She takes the blood and rubs it on Leah’s face. Leah undresses then walks into the ocean while the others watch. Fatin informs Rachel that Leah told everyone that Rachel is psycho.

Daniel asks Toni if anyone was concerned about Leah’s loss of control. She admits that control is just word that adults use. Toni is off by herself when Shelby joins her to question her on why Toni is so angry. When Toni gets in her face, Shelby kicks her away but does nothing more. Toni informs her that she hides behind religion so she doesn’t face who she is. Regan breaks up with Toni due to her hot head. She leaves the car then throws her bag at the car, causing a broken window. She has an outburst after overhearing Martha and Shelby talk about Martha visiting Texas. Toni pushes Nora, when she tries to help, breaks the shelter down, at times looking at Martha who just runs away. Martha later informs Toni that she is exhausted from her behavior and cleaning up after her. The girls share the Takis and shelter later that night. Rachel makes it known to Leah that she knows what she said. Fatin asks for more Diet Coke, which causes more issues for Leah, so Fatin leaves the shelter.

Gretchen lies about Leah’s progress in the program to her parents over a video call. They are relieved to hear about all the progress in her behavior and express that they feel bad for lying to her about what the program was about. It’s as if they don’t know. Once the call is done, she watches footage on the girls. Fatin steals a couple more sodas before walking away.

Martha checks up on Toni after getting a call from Regan about their break up. She invites Toni over for the night as long as she doesn’t run away. Back at the island, Toni is running on the beach at night.

Toni certainly has an anger problem that she needs to sort out, but she’s not the only hothead; Leah is a problem, too. Her issues come from being defensive over the last guy that she was with. She will end up with more enemies if she continues down this path.