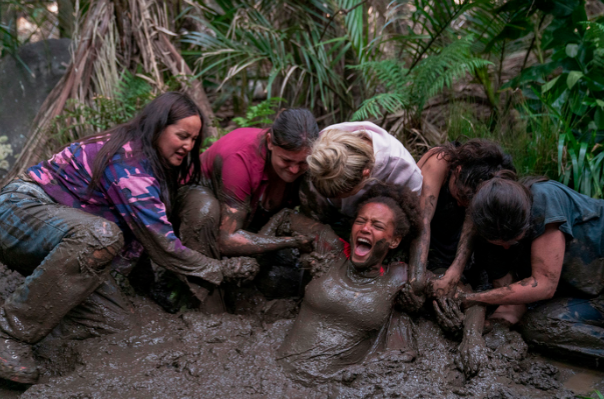 Gretchen takes herself to a spa, while we listen to Fatin play the cello. Fatin and Toni are missing, and Shelby is concerned about them both. Nora begins to act like an overexaggerated version spoiled brat, which Martha and Shelby join in on, but Leah’s take is that it isn’t so funny. Dot informs the pack that her lighter is missing, Rachel takes Leah’s book, stating that they could use it to keep the fire going. Leah immediately attacks her for the book. Toni comes running towards them with fabric that has blood on it that is probably Fatin’s.

They aren’t the only ones concerned. Gretchen and her team are searching for her, too. She blames Alex for the loss of the girl, and he is upset with her ever since Jeanette passed.

When Fatin arrives home, she has a minor temper tantrum over having to continuously practice the cello without having fun like her peers. Her dad convinces her mom to allow Fatin fun time on Saturday.

The pack follow Toni to where she found the cloth. They agree to search for her, Leah making mean comments about the girl while Nora volunteers to stay with the fire. Dot points out to Leah that Fatin has calloused fingers, which meant she worked hard at something.

Fatin practices hard and parties harder, nearly missing curfew. When she arrives home, her father is up waiting for her and to remind her what they promised her mother. He tells her about his life growing up, how she is like him when it comes to outlets, then the two bond over his recreation of bidding wars.

Leah starts to actually worry about Fatin, pointing out that they could be in real danger while out and about. When they are all scared by an animal, Rachel walks away. Leah points out that Rachel is quick to leave when it is not her own plan, but Rachel states that she was going in a different direction to fan out the search party. This does not assist Leah’s proclamation that she is not crazy. Gretchen and her team are watching the search party. She claims that Fatin runs when she is provoked but her coworker points out that in fact, Fatin doesn’t run from conflict.

While enjoying a family leisure time, Fatin goes inside, avoiding her mom’s constant questions. Her father asks her to check on his bid on an expensive watch, but she also comes across nudes between him and several women. She later shows a guy that she just slept with and tells him that she sent the photos to her dad’s contact list but encrypted it so it doesn’t get traced back to her.

Rachel is complaining about Leah when she is sucked into mud that is pulling her in. She screams and refuses help from Dot, making things worse. Nora hears the scream but notices her fire is going out and worries about getting it back up. The rest of the pack comes to help. Martha finally gets Rachel to calm down so they are all able to pull her out, and Nora gets the fire back up by using pages from her notebook. Shelby and Dot are ready to call the search but Leah is adamant on continuing, so the others join too.

Fatin arrives home to find her mom crying and panicking about what has happened. She helps by calming her down.

The pack finds Fatin, immediately getting on her case because she has nail polish in her hand; once they are done, she shows them that she found a small waterfall, marking her path along the way. They celebrate by going in.

Her parents reprimand her for her actions, which Fatin doesn’t agree with considering her father isn’t getting into trouble for cheating on her mom. She’s being sent to a girl’s retreat. Her dad tells her that what she did is worse than anything he has done, as well as she is going to a strict Muslim boarding school after the retreat because she is a danger to the family. Her little brother visits her in her room before she leaves.

Gretchen and her employees are relieved that the girls have found the fountain. So, they celebrate with bubbly. She gives a glass to Andrew to throw in her face, which he does, and tells him to get his act together. The pack has boiled the water to drink while Leah folds Fatin’s clothing. Fatin joins Leah and apologizes for putting information out on blast, then Leah apologizes for her behavior. The two girls hug then join the others, but not before Leah gives Rachel her book to burn for the fire. That’s a nice way to make amends.

At night, Dot leads the girls to Jeanette’s grave so that they can remove the body and bury it deeper because it may bring animals closer to them. Reluctantly, they dig only to find that the body isn’t there. Ideas come up on what may have happened. They conclude that the tide could have carried her away. Leah tells Fatin she doesn’t think the tide did anything.

Dean and Daniel question Fatin if she believed Leah about the whole tide thing. Fatin admits that she agreed with Leah but she is unsure. Leah didn’t tell anyone else her thoughts.

It has been a week and the girls have really lasted for quite a length of time. Leah’s doubts may be what they need to get out of a crazy situation. Fatin’s life seems pretty wild but I kind of agree that her father should have gotten the boot. Not to say that what Fatin did was right. She could’ve gone a different route with that.