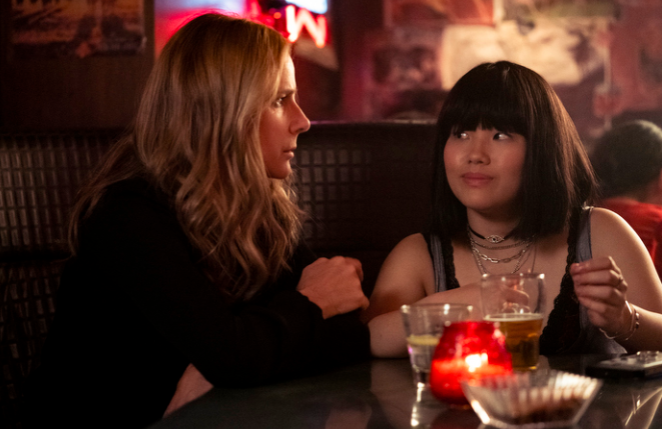 Martha dreams about getting on the private plane where she sees the same flight attendant over and over again with clones. Then he performs a dance to a DNCE song when Jeanette arrives with a cake in her hand. When Martha talks to Jeanette, Jeanette screams, then Martha wakes up to the coastline coming in closer. The girls all panic as items and themselves are swept by the tide.

Gretchen rehearses a presentation based on the data and information collected. Their camp is totaled. Leah watches Shelby closely, then talks to Fatima about what she was thinking. Dot decides for them to move. The girls begin to argue when Martha does her best to calm them, and Shelby shows up with two washed up bags. Jeanette, with an accent, bags on girls for not thinking for themselves. Gretchen watches from the other side of a two-way mirror; the two are later introduced. Jeanette is a college grad student whose name is actually Lynn. On the island, the girls are amazed to find that the extra bag is probably Jeanette’s but are shocked to find pills, vodka, and a lighter in the bag.

Leah doesn’t hold back in voicing her suspicion that Shelby is way too lucky to find a bag that has items such as water purification tabs and pills. Leah takes things too far by threatening to throw the lighter to prove that another will come up when they need it. Nora tackles Leah to calm her down, but Leah overpowers her then physically confronts Shelby on where she goes every morning. Shelby pulls out her dentures, shocking everyone. Maybe Leah is crazy. Gretchen bumps into Lynn again, at a bar. They bond over drinks, with Lynn telling Gretchen about how she survived an assault in high school. Gretchen commends her as well as offers her a job. Lynn accepts.

Gretchen continues with her presentation, stating that Lynn is her inside girl to monitor the teens and another, suggesting Dot, is someone with wilderness skills who can be reached in case of an emergency. The pack move to their new campsite, but when Rachel asks Dot what they should do next, Dot gives Rachel the lighter and states that she is the one to lead them. Rachel notices that they are missing a couple people. Toni comes across Shelby while picking up sticks. Shelby takes a moment to state that she doesn’t hate Toni but Toni calls her out on it. Lynn studies the other girls, as well as sets up a full profile of who she is with Tom assisting. They have social media platforms to showcase her fake life. Lynn, Gretchen, and Tom celebrate her last night as Lynn before they begin the study. They have drinks and do karaoke.

Rachel gives commands to all the girls, while Gretchen’s presentation states that they predict the change of power would go smoothly under their program. However, this is proven wrong when not even Nora does what she is told, calls Rachel out for her behavior, then exposes her secret on Stanford not being a possibility for Rachel and she can’t cope with it. Rachel lashes out at Nora for not having a life, and Nora pushes her. Shelby tells Toni about her problems, as if she is trying to convince her that she doesn’t have a pitch perfect life. When Toni mentions her life problems, Shelby states that at least Toni is free. Toni dismisses it and is shocked by Shelby when she decides to pull Toni in for a kiss then runs off.

Nora and Rachel have gotten physical. The other girls talk about whether they should stop the fight while Fatin uses her toothbrush as an announcer mike. Dot, exasperated by the twins’ behavior, gets up to tell them to stop, sees the lighter on the ground but is pushed into Fatin by the twins, causing her to drop her toothbrush. Fatin is upset by the fact that her electric toothbrush doesn’t work anymore. Dot takes the toothbrush out of her hand and brushes her teeth, which Fatin responds to by punching her nose.

Lynn is gifted vodka by Gretchen to use for cuts and scrapes, then is reminded that things will get real. Shelby finally reaches the camp with Toni behind her but Dot yells at all of them to stop acting out. She then explains how that they are all going to die because search parties don’t last long, then she takes a swig out of the vodka.

Lynn/Jeanette gets on the plane, over excited with her camera phone out. She interacts with Shelby and Fatin but doesn’t get much from the two. The plane hits turbulence. Later we see it was all a simulation. All the girls are knocked out and being carried to different boats, except for Lynn/Jeannette who is aware. When she sees the girls laid out on the boat, she remembers her assault, changes her mind on doing the project. When Tom tries to grab her, Lynn/Jeannette falls on the edge of the dock then into the water. Tom pulls her in and wants to report the incident but Lynn/Jeanette asks him not to. She hears Gretchen over the radio, stating how amazing Lynn/Jeanette is for what she is doing. Empowered by her hero, Lynn/Jeanette gets on the boat and urges Tom to take her out to their position.

Gretchen nears the end of her presentation on a utopia led by girls that is proven by their program and states that the donors are here because they don’t want to be in a position a decade from now dealing with an apocalypse, wishing that leadership was in women’s hands.

Tom claps for her. Gretchen asks him what he thinks about her fake burst of emotion and what she should prepare for. He asks her what she will say when they ask about Lynn. Gretchen states some kind words. The girls are quiet after the revelation of their possible death. Fatin hears a plane. They scream and shout when it passes over them. The pack celebrate when he turns back around, realizing that it sees them. Everyone celebrates, except Shelby who looks worried.

After a few harmonious days, tension and hunger clearly got to the girls. Lynn/Jeanette background was needed, but it is a shame that her death could have been prevented if she got checked out from her fall. Gretchen is just a terrible person and so is everyone else who is just allowing the trauma to continue to these girls. Who know what that small plane was actually. I’m not sure if all the girls survive the next few episodes.