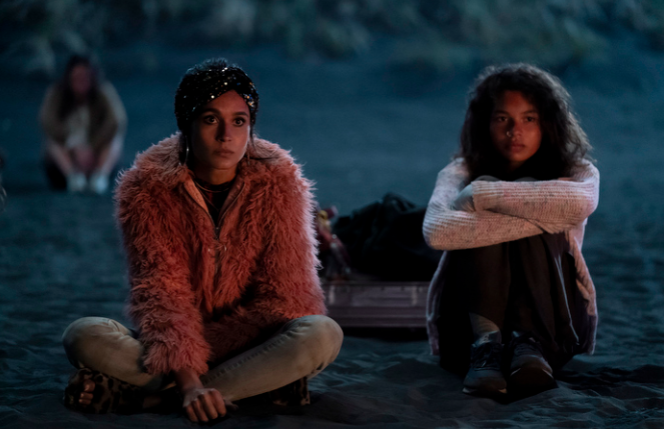 The pack is on a talk show and have been dubbed “The Unsinkable Eight.” Each girl answers a question, with Fatin’s answer breaking the fantasy by stating she wants to fornicate. Dot wants to change her answer. Fatin suggests to Leah that she should probably do the same because men will be sliding into her DM’s. Martha asks if that will happen for her, too. After Fatin confirms this, all the girls celebrate that they will be going home, except Shelby, who doesn’t look happy about the possibility. Toni notices.

Daniel has changed his look to a suit and tie like Dean, for their next patient. Her nurse report states she has been all over the place, and Daniel thinks she needs more of an authoritative approach. Shelby comes through the door on crutches with a buzz cut. Daniel asks her about why she changed from being the optimistic to being the opposite when the possibility of being rescued came about. Shelby states that she crashed. She was an active daddy’s girl.

Gretchen is dealing with the issue of finding the pilot who flew over the island or possibly having her people be the rescue crew, as well as meeting with a benefactor for more cash. Dot has the girls indulge in all of the food, Martha accidentally eats edibles, and the girls all decide to join in on the fun. Shelby is off to herself, praying, when Dot comes along to suggest that she joins then leaves the bottle of vodka with Shelby.

Saturday breakfast with Shelby’s family is wholesome until she brings up having permanent teeth put in instead of dentures. However, her parents refuse. Back on the island, a drunk Shelby toys with the idea of breaking her dentures. The rest of the pack is tripping on the gummies talking about orgasms when Shelby joins. Toni notices that she is trashed. Fatin admits that she will miss the girls, informs them of her plans, and Dot states she is willing to join. They act cute, which Shelby interrupts by suggesting games. They all run into the water, but Shelby watches and drinks. Rachel starts her period, which she reacts to awkwardly.

Daniel suggests that she was drinking to numb painful feelings but Shelby insists that she was excited to be going home. While out bowling with her friend Becca, Becca’s stepbrother Brian arrives, and she reacts weirdly. Becca admits that she had a crush on him. Then one day Brian came into her room, they kissed, and he kept coming to her room and pressuring her to do sexual favors, then he went to college without saying a word to her since. It made her to go to a dark place. Shelby consoles her then comes up with the idea to put two reindeer on top of Brian’s car, spray paint it, then Becca pours a drink into his gas tank. I’m actually shocked.

When Toni is alone, Shelby takes the time to accuse her of telling Martha about what they did then accusing Toni about being ashamed. Shelby shows off her pageant dress and song choice. Once they are playing around, Shelby gives her a kiss, but her dad interrupts the moment by announcing dinner and reminds his daughter that she can’t eat the meatballs. Nora checks on Rachel, who is sitting alone, and Rachel admits that she hasn’t had her period in three years because her coach put her on a drug to keep her body a certain way. Rachel is unsure what she is going home to, but Nora states there is a wild life waiting.

Shelby tells Dean and Daniel that the island was a pause to their life. She listens from the staircase as her parents and Becca’s parents talk. Later, she begs her dad to look at her and talk to her about what they said. He talks to her about how he prays for people who don’t deserve it. Shelby breaks, asserting that it was Becca who kissed her, and nothing has ever happened between them. He doesn’t believe her.

Martha walks alone in the jungle, high, when she accidentally sees Alex watching her then disappears. Gretchen’s meal with the benefactor seems to be going well but her phone keeps buzzing. When she answers, she is upset that Martha saw Alex. Martha rushes to tell the girls that their mannequin, Marcus, became a real boy but when they go check, there’s only a mannequin.

Becca visits Shelby, which she doesn’t want. Shelby is upset by Becca telling her parents what happened, then tells her that the matter with Brian is Becca’s fault, putting the blame on her for being over sexual. Becca reacts kindly, but Shelby tells her to stay away. Her dad probably saw what happened.

The pack talk about what to do with the mannequin when Fatin gives Shelby a brush to prepare her hair for a photoshoot. The brush gets stuck in her hair. Despite Fatin trying to assist, Shelby takes scissors and cuts her hair. Shelby is in a dressing room, preparing for a pageant, when one of the contestants informs her that Becca passed away. When her name is called to get on stage, Shelby takes a moment but arrives, looking upset. She sings her song with her parents watching, but her father looks unsettled. Tears run down her face but she finishes the song, moving the crowd to applause, except her dad. At home, her dad celebrates with ice cream and gives Shelby the go ahead to get permanent teeth.

Shelby tells Dean and Daniel that she had other plans for the summer. When Daniel brings that up after the day she cut her hair, unfortunate incidents occurred. She refuses to talk further until she is given permission to see Leah, not Toni like they all assumed. Leah apologizes to Shelby for her accusations. She tells Shelby to take it easy on herself for what she is going through and to take care of herself. Gretchen arrives to good news about the Alex situation and the pilot situation is fixed. Tom questions if Gretchen had the pilot killed, but she states that they had the coordinates changed so if he does try to rescue them, he would end up at a hotel. Gretchen instructs her employees to keep an eye on the girls because the dynamics will change due to them not getting rescued.

Dean and Daniel escort Shelby to see Leah. When Leah sees Shelby, she runs to hug her. During the hug, Shelby sneaks a note into Leah’s shirt without Dean and Daniel noticing.

So, the two most unhinged girls are probably going to save the rest of them. Shelby is clearly a daddy’s girl but dang she got issues! I can’t even imagine suppressing yourself to that extent for the love of your parents. I’m curious as to what happened after, but at the same time, I do not want to know who died and how. Also, not entirely convinced that Gretchen didn’t have the pilot killed.