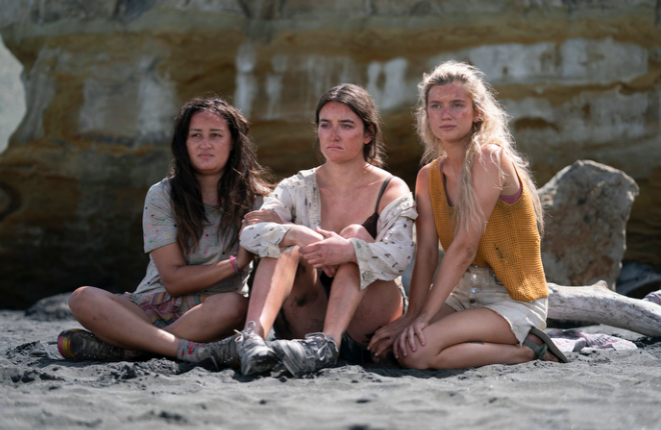 Dean watches footage of the girls and Leah looks into the camera, when Gretchen walks in. He is concerned about their wellbeing and how much longer until they can hang out together. Gretchen isn’t impressed by his concerns and assigns him a box of items to go through. He begins with Nora’s journal. The girls haven’t eaten in a couple of days. Dot is feeling guilty for having them eat all the food, Shelby is back to being helpful, Leah is paranoid about the island again, and Martha is hopeful that all is going to work out.

As a child, Martha had an accident while jumping on a trampoline. Toni talks Martha about checking for items in the jungle and then dances around the idea of asking Shelby. After her accident, Martha is in physical therapy. Doctor Ted encourages her by thinking of being able to dance again. She states her favorite dance is the jingle. When she’s older, after dance practice, Martha’s mom comes to talk to her about Doctor Ted, who has been accused of abusing other girls. Martha doesn’t believe the other girls, even though her parents are concerned is if it happened to her.

While Leah is laying on the beach, pulling her eyebrows, Fatin checks up on her. Leah insists that her gut is telling her something is wrong and the reason she lets her mind get away is because she feels that something is going on. Fatin’s words make Leah stomp away.

Rachel is refusing to get into the water, and Nora notices that she flinches when water is flicked at her. Martha gets upset when Shelby suggests that the animal that is wandering around should become food for them and leaves the other two girls. Dot suggests to Leah that she should sit down, pointing out that hunger and food isn’t the only thing that could kill them. Their mindset can, too.

Toni is sleeping over at Martha’s. She brings up the case and how Martha is possibly in denial. Martha attacks Toni for suggesting that she do anything. Toni is outside, drying sheets, when Mrs. Blackburn (Kimberly Guerrero) comes out to assist. The sheets are Martha’s and it would seem that she was wetting the bed, something that started after Martha was getting better. Mrs. Blackburn concludes that Dr. Ted (Lewis Fitz-Gerald) was the reason behind it, Martha sees the positive side of everything because she created a fantasy world to not deal with reality. That is terrible.

Martha finds the goat, coaxing it to move. Rachel and Nora arrive at a hill, where Nora states that Rachel is able to deal with her water problem. Leah runs out to the ocean stating that it’s the way to their safety. Toni and Shelby are sort of bonding. Nora doesn’t want Rachel to lose herself, so she encourages Rachel to dive. At this point, the twins hear Dot and Fatin yelling for Leah, then notice how far Leah is. Rachel dives in and reaches Leah. They both struggle against the waves.

While Martha is getting her dress fixed up, the TV reports that Dr. Ted was caught trying to flee the country and his trail had a few witnesses. Later, Toni hears Martha crying in bed. While she is comforting her, Martha says, “He is a monster.”

Toni and Shelby find Martha coaxing the goat to leave, which it does. Toni questions why she did that. In court, Martha has a difficult time answering the question. Toni points out that Martha needs to get a grip on reality because they are about to die and can’t keep foraging. Leah wants to go back to the ocean, Dot wants to give her medication, Fatin calms Leah down, while Nora takes care of an out of breath Rachel. Fatin gives Leah medication to calm down, which she takes. Thankfully.

Toni and Shelby find lychee while searching for the goat. A moment passes between them that results in Shelby kissing Toni again. Toni questions if she is sure then the two proceed to get physical under the lychee tree. Martha finds the goat, places her bag down and takes a moment.

At the dance competition, Martha is competing as an adult, but looks nervous. Mrs. Blackburn is upset that Martha told the courts lies and refuses to see the things in front of her.  We hear Dr. Ted’s voice stating that every time she dances, she will think of him and their time together. Ugh. Martha disappears from the dressing room. Martha breaks her walking stick, walks toward the goat, picks up a rock, then repeatedly smashes the goat’s head with it. Blood splatters everywhere. Goodness.

Dean packs up some items, gets a little teary eyed, then takes it to Gretchen, informing her that there is nothing in the box that can be used to leverage against Martha’s parents suing. Gretchen brings up Martha’s criminal case, stating it is a reason for choosing her, but it was just her perjuring herself. Gretchen apologizes to Dean for being harsh. She just hopes he is happy. Dean states he is, but his soft smile goes away when she walks away.

At night, Leah wakes up then takes a walk and finds Nora talking to a tree, talking about how Leah is dangerous. It looks like there is a camera. Tom and the employees see her coming before Nora does. Leah accuses Norah of knowing what is happening to them. Nora hushes Leah, encouraging her to think that she is just dreaming, then walks away.

One: I wasn’t expecting to find out that Martha was sexually abused as a child. I’m pretty sure she is dead at this point of the show since we haven’t seen her get interviewed for what happened at the island. She is quite sweet.

Two: Out of all the girls in the pack, I didn’t think Nora was in on the program! How did she get pulled in? Girl why!