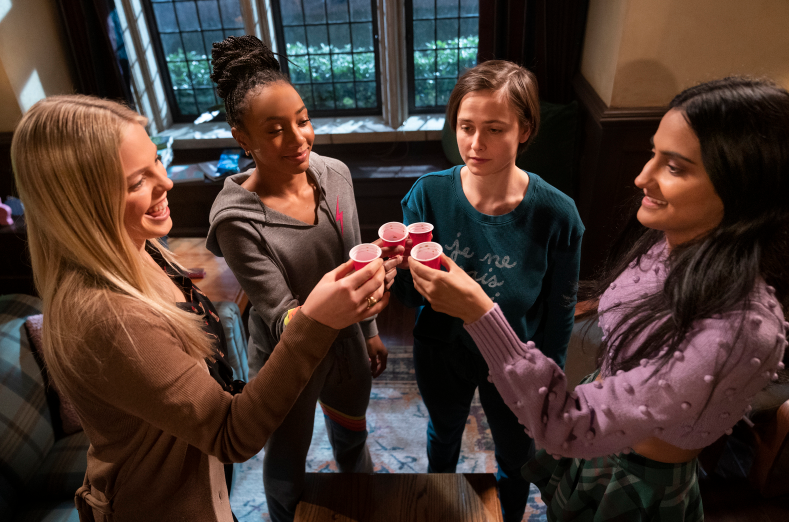 ***There are brief spoilers ahead.

After the success of exploring the coming of age narrative of high schoolers processing their sexuality in the Netflix show Never Have I Ever, Mindy Kaling is delving deep into college freshmen roommates in her new HBO Max show The Sex Lives of College Girls which will be released November 18th.

The four leads are Leighton (Renee’ Rapp), a closeted queer white girl trying to maintain her popularity from high school by engaging in sorority life; Kimberly (Pauline Chalamet), a white girl of a low-income background from a small predominantly white town questioning being around peers of higher income; Bela (Amrit Kaur), a South Asian girl with the desire to become a comedy writer and to engage in as much sex as possible; and Whitney (Alyah Chanelle Scott), a Black girl who wants to build prowess and friendship in her soccer team, while also enamored by her slightly older married white coach, Dalton (James Morosini).

Each girl is hoping for college to be her new safe space away from home because they get to engage in the passions they love. However, even the spaces that cater to things they love aren’t one hundred percent safe.

Bela loves the world of entertainment comedy can provide, but it doesn’t help how there are barriers to her joining the school’s comedy column due to her gender and her racial background.

Leighton enjoys the class and astuteness of Greek groups, but she is scared she’ll lose access if she were to label herself as gay.

Whitney is so driven in her athleticism and the athletic community, but along with her affair with her coach being a barrier, the fact that she witnesses the all-boy sports teams being treated with more respect despite the all-girl sports teams bringing more trophies is a whole other barrier.

Kimberly wants to use college to her advantage to be socially engaged and worldly, but she is intimidated by her peers who have more experience than her in worldliness because they had the money to do that.

This show is really good at approaching the nuances of racism, sexism, and class on a college campus. Especially when it comes to dismantling the idea around those issues no longer being existent due to how “open-minded” Gen Z folks are supposed to be. I’m always a fan of how Mindy Kaling’s content is able to use humor to tackle hard topics that aren’t on the nose or forceful. All four actresses are so well cast in their respective roles, and each character has their share of nuance that isn’t limited to their identities. They’re all different college girls who want an education and have fun.

There are instances of interactions Kimberly has with her work study co-workers of color Lila (Ilia Isorelys Paulino) and Canaan (Christopher Meyer) as they all pay their way through school, or that Leighton has with queer and trans folks in the Women’s Center (Midori Francis, Cheyenne Perez, Amanda Ripley, and Vico Ortiz) as penance from the campus administration for a drunken mishap, that are nice to see as far as the layers of privileges and lack of privileges are concerned.

What really makes this series shine is the sight of sexually active Black and Brown girls who just want to be joyful and have a good time.

Witnessing a Black disabled girl, Jocelyn (Lauren “Lolo” Spencer), be so outgoing and friendly from the beginning of the series to the end, being so comfortable with her sexuality that she’s chill at a naked party on campus, and being confident about her TikTok fame on campus brings me joy. Give Jocelyn a full-fledged story about juggling her studies along with being a social media celebrity! Make her a lead next season, please!

There is so much to appreciate about Whitney as a character. For example, shout out to a show created by Mindy Kaling where the Black woman lead finally has darker skin! In series such as Four Weddings and a Funeral and Never Have I Ever, a Black lead or a Black character with a significant speaking role is usually light-skinned.

I resonate with her humor and charm. I mostly resonate with how she and other college girls like her don’t get a well-rounded college experience because of dating someone who sucks.

I want so much more for Whitney, and I feel like she deserves more to be written about. For example, I feel like out of all four leads’ backstories with their families, she is given the least amount. Leighton, Kimberly, and Bela’s family stories are connected to why their personal lives at college are the way they are. With Whitney, we know how her mother is a senator, which places a form of pressure on her, and we know her dad isn’t very present. However, how does that play an influence in her relationship with Dalton other than Dalton choosing to end it instead of her? We only got one line from her teammate, Jena (Maya Rose), in the second episode about how boys their age aren’t usually into driven girls such as themselves to justify her continued affair.

I also want more of her friendship with Willow (Renika Williams), a queer Black woman who has been out before the show even started. Willow’s character development needs to expand beyond supporting Whitney as well.

Also, why aren’t there more men of color we can see having sex? Mindy Kaling is still utilizing the storyline of South Asian women only dating white men (if not white-passing men) from shows such as The Office, The Mindy Project, Champions, and Never Have I Ever, through Bela’s character. In fact, all four leads mostly sleep with white men. Particularly white men of normative bodies with six-pack abs. At the same time, I do love Bela and Whitney’s diverse range of platonic interactions with people of color throughout the season.

For the next season, I’d love to see more sexually active men of color engaging with the leads. Nevertheless, I am glad we get to see Leighton develop a relationship with a queer East Asian woman of color, Alicia (Midori Francis).

I’d also love to see more body types of all genders given how the majority of the cast is thin, and more trans women at the Women’s Center since we only saw AFAB cis and trans folks. I know you can’t represent every single story in one show, but it’s all still worth noting.
I’m still so glad a show like The Sex Lives of College Girls exists. The humor amongst all the characters is so well written and it’s great to see the subversion of tropes ages past of college girls and their sex lives. They are each fully complex beings with their respective passions and desires outside of sex too. I look forward to the next season

The first two episodes of The Sex Lives of College Girls premieres today on HBO Max. The ten-episode series continues with three new episodes on November 25 and December 2, leading up to the final two episodes of the season on December 9.