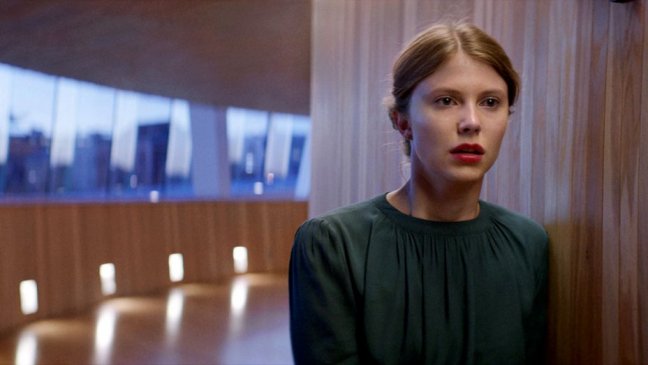 From director Joachim Trier (Louder Than Bombs) comes the new sinful, sensuous, and suspenseful film, Thelma. The movie combines real world tension with otherworldly themes that never feel goofy or unbelievable. Trier is minimalist in his approach to the story. As the slow-burning tension rises, little information is given to the audience as to what’s happening—but there are enough small breadcrumbs available for anyone to come to their own conclusion.

Thelma (Eili Harboe) is a young university student with a secret. Telling her parents is out of the question. They are toxic, close-minded, meddling, and controlling—pretty much everything Thelma is trying to escape. When she meets Anja (Kaya Wilkins), her attraction to her reveals suppressed feelings she’s worked hard to hide. The erroneous messages she received from her overly religious parents skewed her view of reality and brainwashed her into seeing herself as impure and unworthy of heaven.

Her visions and her nightmares are laced with biblical metaphors and symbolism, which give the audience an inside look into the operation of Thelma’s mind. Her refusal to be honest with herself creates stress that causes violent convulsions every time she is triggered with “sinful thoughts.” These emotions cause her to awaken a power within her that is beyond her control, and everyone in her life is in danger of feeling the wrath of her unique abilities.

The subconscious mind can be a scary place, as we don’t always know what’s hiding there. Now, imagine whatever you’re thinking (whether you are conscious or not), manifest in real time; this is what causes Thelma’s mental state to deteriorate. She runs to the church to pray, but it makes things worse. The more she represses her thoughts of Anja, the more her powers are provoked. The truth will set you free, but suppressing it will keep you trapped inside your own head. Is it worth it?

Sometimes love is worth it. Her parents are cold and distant, but Anja fills all of those gaps. She’s a beautiful woman with a free spirit who is sincere, caring, and instantly attracted to Thelma. Trier does well to fill their courtship with moments of sexual intensity that don’t objectify them. I appreciate this because Anja is a mixed-race woman who is looking to experience love and isn’t treated as a token.

ALSO READ
'On the Come Up' Star Jamila C. Gray on the Difference Between a Rapper and a Lyricist

This is also a perfect case study on the effects of high stress—which is a natural physical and mental reaction to life experiences. However, conversion disorder (as mentioned in the movie) is a mental condition in which a person has physical symptoms that cannot be explained by medical evaluation. These symptoms are thought of as an attempt to resolve an internal conflict. Often dismissed by some clinicians as “all in your head,” this movie doesn’t dismiss what Thelma is going through and I commend the writing for being aware of how dangerous that language can be.

One of the things I like about Trier’s style is his understanding of balance. There is no need for hokey dialogue or special effects because he is confident in the material. He shoots his scenes in a way that makes Thelma’s life appear claustrophobic. But make no mistake, he doesn’t hold back. We see the protagonist suffer tremendously, but there is also space within the narrative for her to embrace her gift and newfound freedom.

If you’ve ever held something deep down that nearly ruined you, then you’ll relate to Thelma. Some viewers may get turned off by the creeping nature of it all, but this movie is smart and expertly crafted in its representation of mental oppression, and what it means to eventually break free from its stranglehold.

If you need any more convincing on why you need to see this movie, one of my old tweets might help: