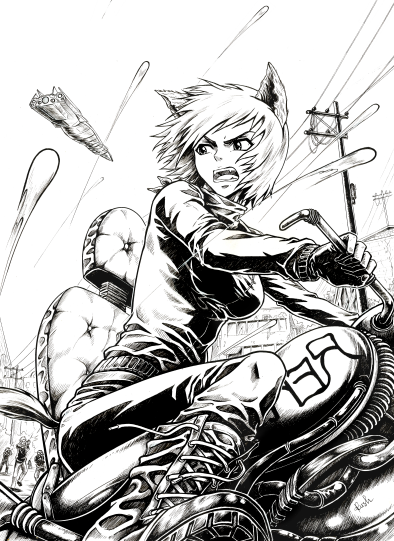 Are you a fan of comics? Do you like the really gritty ones with lots of wit and fun banter between the characters? Well, why not get into Cremisi?

Cremisi is a comic series by writer and creator Issac Fox, along with the amazing art done by Mitsu and published by Astral Ticket. The story follows Captain Shay and his virtual sidekick Alice on their adventures across the universe in Celestial year 3731.

Fifteen years earlier a being only known as Cremisi wiped out the entire population of a planetary colony. Without any clues as to why the attack happened, this becomes known as the Cremisi incident by the citizens of Free Space. Captain Shay and Alice, on the spaceship Purgatory, come across a derelict freighter in space and happen upon the terrible truth behind the Cremisi incident. This discovery brings him an entire cult of fanatics that chase after him as this discovery could halt their plan to end all life among the stars.

According to creator, Issac Fox, the story is focused mainly on themes of depression, anxiety, and psychological trauma, along with how these things do not have to define or inhibit our development. Each character has their own struggles and hurdles to face, and it’s through our journey with these characters that we too can be inspired to tackle the things in our own lives that seek to hold us back from our true potential.

In the fourth issue of this amazing tale, we’re introduced to a new character named Renee. She’s a 26-year-old foul-mouthed mechanic with a fiery personality who doesn’t beat around the bush and doesn’t pull her punches when it comes to a good back and forth. It’s easy to tell that Renee is there to set things straight, including Captain Shay, when needed.

The writing is natural and flows well. The character interactions feel like you’re reading a real conversation between two people and not like you’re seeing two characters go through canned responses. A lot of comics can easily fall into this, but Cremisi does a great job of dodging this issue with how each character is written and how the personalities are portrayed.

Mitsu nails the gritty aesthetic of this comic to a T. The scenes each have a great perspective that not only creates atmosphere but conveys feeling and emotion. You can tell there’s care taken to keep each character’s look consistent and that their appearances match with their personalities. Shay’s silhouette is reminiscent of a Western hero with a long coat and hat. It matches with his gruff and rough attitude. Renee, who’s rather rough around the edges herself, goes for a more industrial look, with her tools on display and her boots and tank top. She’s there to fix spaceships, not put on a fashion show.

Speaking of Renee’s design, we get a lot of nods to her past by looking at her appearance. This design was made to emphasize her rough life as an orphan and speak to her being the only one of her species on the planet. Having to grow up tough has left her with quite a few scars to show for it. As far as physique goes, Renee is built and has muscle on her from years of hard work and long hours working on spaceships. It’s hard to reach the skill level that she has without putting in the time and effort it takes to get there.

It’s Renee’s tough upbringing that gives her that edge, that ability to cut to the core of an issue and get down to business. She’s about her work and wants nothing more than to do that and live in peace, though working with Shay means she might not be so lucky in terms of peace. But to think her brash outer shell is all she is would be a mistake. According to her bio, Renee is more than meets the eye, and we’ll discover this as the series goes on.

Renee as a character is a breath of fresh air from the moment we first meet her. She’s someone who knows she’s good at what she does and makes no apology for that. Being that she’s so good at her mechanics, any comments about her being there for brownie points would be inaccurate. In fact, as far as characters go she’s a far cry from how woman mechanics are usually portrayed (see Cindy from Final Fantasy XV). Renee is not scantily clad, and she’s not there to be eye candy. Not that those things are inherently wrong, just that those are a lot of the portrayals that most women get in media like comics and action movies/shows.

What we’re gifted with is a woman who strong, talented, and outspoken. Renee is properly dressed for the job she does and has made it to where she is on her own merit and with the hard work that she’s put in. We’ll have the pleasure of getting to know this spitfire of a woman as the series goes on, as well as whether her interactions with Captain Shay will either keep only to the entertaining banter we see between them now or if they’ll have more heartfelt conversations.

A Kickstarter for the fourth book will open on June 4, with covers from well-known artists such as Erich Chen, Alan Quah, Jason Hehr, Anna Zhuo, and more. If you’re looking to keep up with developments you can check out Astral Ticket’s Twitter account for updates as they come.