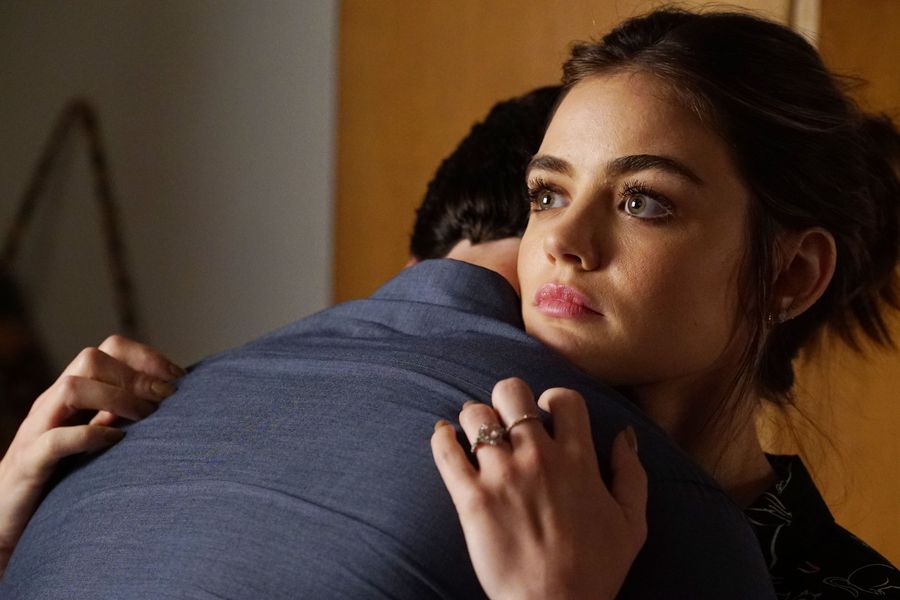 It’s official: the Liar with the worst final storyline is Aria Montgomery. I wasn’t quite sure it would end up being her, especially with Hanna doing pretty much nothing, but then we got “Driving Miss Crazy.” Among other things, it features a black-and-white cell block musical number (it’s a dream, of course) where Ezra’s being beaten to a pulp while Mona sings and a panicked Aria runs around in a veil. Then, because it made sense to someone, Veronica appears, calls Aria “a selfish little bitch” and informs her that she “wouldn’t piss on you if you were on fire.” Good to know, dream V.

This is all because Aria filled out a police report “like six years ago” that accuses Ezra of a bunch of stuff he really did do like exploit a minor and statutory rape. I can’t promise I’d have cared more than I already don’t if they’d told me this sooner, but I really thought I would have. Alas, this meh development just has me side eyeing everyone.

Despite the issues I (and plenty other viewers) have with Ezra and Aria’s relationship, filling out a police report to “punish” Ezra is pretty screwed up. I’d be all for it if Aria was actually looking for some kind of justice, but since she seems to have done it in the midst of some sort of tantrum, I don’t feel much of anything. I am, however, really confused about the timeline. I don’t remember Aria doing this on the show (I’m assuming this happened after Aria found out Ezra was using her for his book, but if it had been onscreen, we’d have been reminded of it in the“Previously on,” right?) so I’m thinking the show just slipped this in there as a narrative convenience. But if that’s the case, I hope it’s ready to follow through on it because it’s written Aria into a pretty tight corner.

There’s no way out at this point. Or at least there shouldn’t be. She’s betrayed everyone’s trust, and done some pretty gross (trashing the nursery) and damaging (planting audio of Peter and Jessica plotting murder) things so forgiving shouldn’t happen in the span of a few episodes. They don’t even know that she’s done this yet, but once they do, there’s no scenario in which forgiving Aria, and resuming romance and normal friendships, can realistically happen by the time this series ends.

On the other end of the show is Spencer, clinging to her Satisfactory Storytelling crown. The Hastings tragedy continues as Peter’s forced to admit he and Jessica were going to kill Mary (until Mary killed Jessica first).  This Shakespearean weirdness always threatens to be too ridiculous to be watchable, but PLL continues to toe the line. For every absurd revelation, there’s an understandable reaction. Like Veronica forfeiting her Senate seat before someone learns her husband is an attempted murderer. And Spencer turning down Mary’s offer to flee because she can’t abandon her family, as crappy as they are.

Hanna is practically dying to have a storyline, but every time she gets close, the show just…doesn’t let her? (Ashley Benson’s hair continues to look great though). Despite the threat of another turn for her looming, A.D’s lost interest. So now Hanna’s returning to crime scenes (who does this??) to check on shovels she tossed, only to find them missing. But we get little follow through on that because Caleb proposes. There was surely a less awkward way to have Caleb propose to Hanna than having him do it because Ashley’s not sure of his intentions (wtf Ashley?), but it gets these points back by having them make it official in a tent — a cute callback to the first time Hanna and Caleb slept together.

But Hanna still gets more to work with than Emily. With Alison out of town, there’s apparently nothing else for her to do than follow Mona around. Mona’s the only one inching this season forward, locating the doctor who inseminated Alison in the hopes of tracking down the sperm donor. They don’t get that far, just confirmation that someone paid him to inseminate her (because no one figured that to be the case before). But most intriguing is what Mona’s doing. She’s got the shovels Hanna called herself hiding, and she was at the Brew when Aria went looking for her “reward”. So is Mona A.D?

I really, really hope not. Been there, done that.