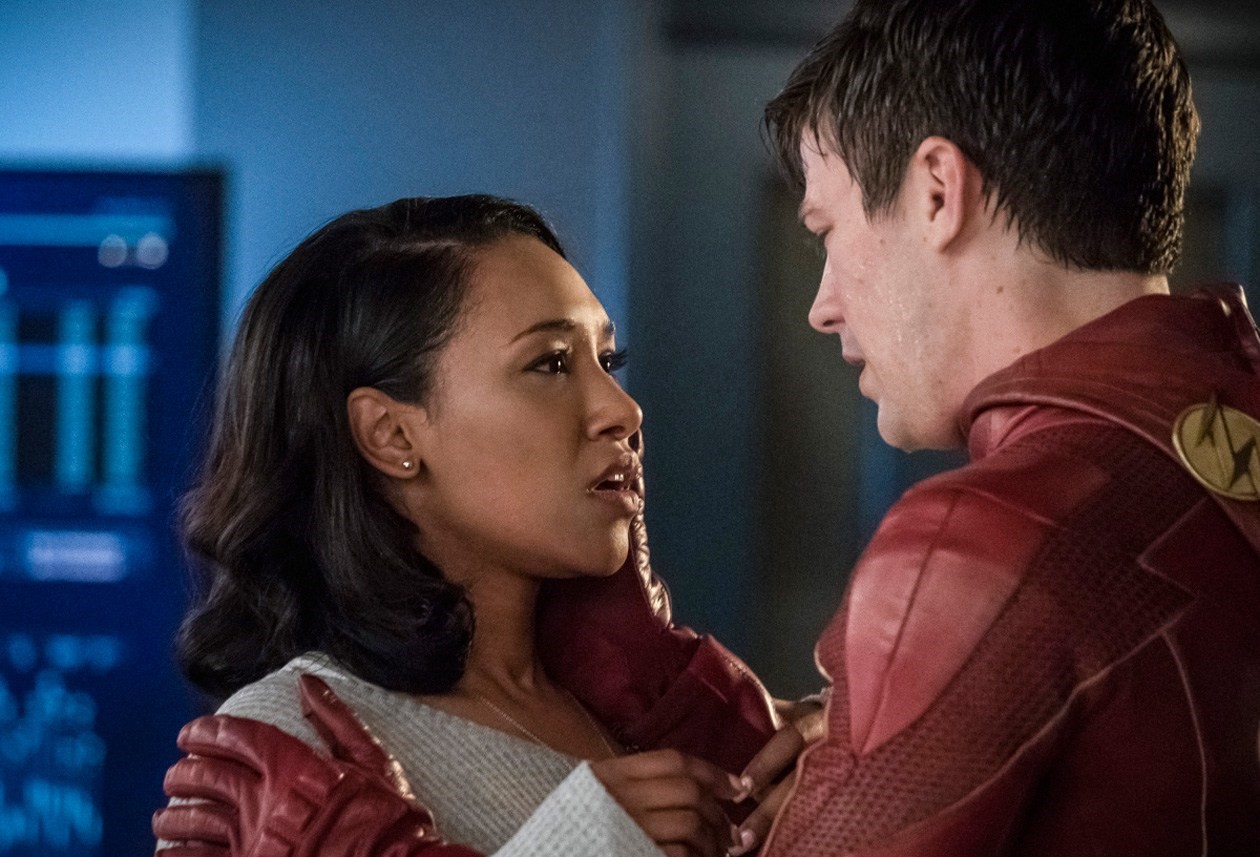 After a few somewhat successful DeVoe-centric episodes this season, The Flash did something different with its 15th episode. “Enter Flashtime” takes place over a period of 10 seconds and not only puts Barry’s speedster abilities to the test but Jesse Quick’s and Jay Garrick’s as well. While the episode played with the stamina of our speedsters and Team Flash’s other meta-humans, it also tackled emotional and familial issues, specifically between Harry and Jesse. All in all, the episode was fun and proved that Iris West-Allen’s knowledge of the Speed Force is pretty badass. Here’s what happened this episode:

The Fastest Man In The World Still Isn’t Fast Enough

The only real mention of DeVoe happens in the beginning of the episode as Barry works on improving his speedster abilities. After discovering that DeVoe hides out in dimensional pockets, Barry realizes that he needs to become fast enough to jump into DeVoe’s dimensional shift when the two face off. Barry, determined as ever, enlists Cisco to help him with the task by opening and closing breaches as Barry tries to run through them before they close. After trying to accomplish this task and failing, Barry expresses frustration with himself while Cisco calls it a day. Iris convinces Barry to take the rest of the day off and suggests that she and Barry have some one on one time. Truth be told, Iris and Barry haven’t had much quality time since his release from prison and a little relationship time is much needed. DeVoe and the dimensional pockets are just going to have to wait.

Jesse and Harry Have A Problem

From previous episodes, we’ve known that Jesse and Harry had some sort of falling out. In this episode, we discover that the two are at odds over Harry’s inability to talk about the death of Jesse’s mother. After receiving an apology cube without an apology (these cubes are so weird!), Jesse pops up on Team Flash’s earth to confront her father. She’s convinced that if her father talks about her mother, he’ll be less angry and their relationship will improve. Unfortunately, this is Harry we’re talking about and his stubborn nature throws an ax into any reconciliation. However, before the two can address this issue, a crisis hits Central City when Joe West is attacked by a mysterious group while transporting an ARGUS container.

While escorting a large ARGUS container, Joe comes under heavy fire and Team Flash comes to help. When Barry and the rest of the gang arrives, one of the people shooting at the armed escort gains access to the ARGUS container and activates a mega nuclear bomb. Upon realizing this, Barry enters Flashtime, meaning that everyone outside of his speedster abilities (with the exception of other speedsters) appear frozen in time. Jesse, who is there with Barry, brainstorms with the scarlet speedster as they both watch the bomb slowly explode. Barry notes that if they both stop their speedster running before they solve the problem, Central City and everyone they love will die from the explosion. Barry and Jesse have 10 seconds to figure out how to get rid of a nuclear bomb and things don’t look too great.

Jesse and Barry quickly get to work trying to figure out how to get rid of the nuclear bomb that’s exploding in Central City. Jesse suggests that they speed the bomb out of the city but Barry explains that they don’t have enough time; the bomb would explode before they make it past the city limits. Barry, using his knowledge of the Speed Force, temporary speeds time up for Cisco and asks his friend to try to vibe the bomb elsewhere. Only problem is that the increased speed affects Cisco negatively and he’s all out of vibes.

Next, they contemplate time travel (Barry refuses this option adamantly — lesson well learned, finally), while Harry, after being brought up to speed, suggests they throw the bomb into the Speed Force. Fortunately, Jay Garrick shows up and explains that this option would cause all speedsters to lose their powers. They try freezing the bomb with the help of Killer Frost (doesn’t work) and they even try to throw lightning at it (Jesse, Barry and Jay), but Jay doesn’t have the strength to stay in the Speed Force and that plan fails. Thus, one by one, their plans fail, and eventually, Jay and Jesse grow weary from all the running and exit Speedtime, leaving Barry to struggle as the pressures of maintaining super speeds begin to take a toll on him. When Barry finally realizes that he and his friends have tried everything to save Central City, he speeds back to Star Labs to say goodbye to his love, Iris.

When Barry arrives at Star Labs, he is weary, exhausted, and sweating profusely from speedster exhaustion. He hugs Iris, bringing her up to his speed in Speedtime. He tells her that he has tried everything to save them and embraces her helplessly. As he’s going down the list of things he’s tried to do to get rid of the nuclear bomb, Iris listens and Barry tells her he can’t save her and that he’s so tired and won’t be able to maintain the speeds he’s been running to solve the crisis. As he cries into her shoulder (Grant Gustin, dude, you are amazing at crying), Iris realizes that if they use the lightning from the Speed Force itself, they can neutralize the bomb. Her plan works and she saves the day.

The episode was tension-filled, and taking a break from the DeVoe storyline was much needed. Having Iris solve a problem that not even Harry or Cisco (the brains of the group) could solve was refreshing and made me excited for Iris’ upcoming speedster episode. The only thing that really annoyed me about this episode was the fact that all these other speedsters were doing their part to save Central City except for Wally West. Hopefully, Wally is living his best life over at Legends of Tomorrow because The Flash obviously did not deserve him.