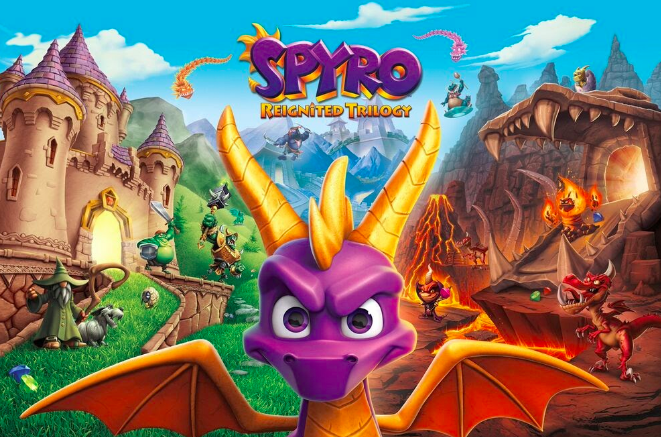 With Crash Bandicoot getting a continuation with the recently released Crash Bandicoot 4: It’s about Time, gamers can’t help but think about the other series that has been a sort of sibling to the Crash series since the two burst onto the scene in the ’90s. A Crash sequel hopefully means that a Spyro sequel is not far behind. So let’s sit and think about what we’d like to see in a possible fourth installment for Spyro — one that’s not rushed to meet the holiday season and isn’t full of glitches. Here are a few things we’d like to see in a Spyro sequel.

With the Reignited Trilogy, we were given a standard static start screen to accommodate the three games in the trilogy, meaning that the start screens many of us remember from our childhoods weren’t recreated in glorious HD and in the beautiful artstyle that Toys for Bob developed for Reignited. This is a real shame, as there’s something so iconic about Spyro flying in after we see a Gnorc standing next to the Insomniac sign in Spyro 1. Or how about Spyro charging into frame after a caveman from Skeelos Badlands is chased off by a dinosaur while the Glimmer theme plays? Not to mention the amazing imagery of Spyro charging a ninja to save a dragon egg while the Sparx levels theme plays. It would be amazing to see an all-new title screen for a fourth sequel.

In addition to the amazing start screens, let’s talk about how Insomniac used to handle the end credits when it came to the original Spyro trilogy. The end credits were so creative, it’s almost criminal to see that Reignited didn’t take the chance to bring them back. For those who’ve never experienced the old end credits, it was camera fly-throughs of each level in the game while the credits would flash across the screen. Out of context, this would seem meaningless, but search the three sequences when you have the time. After completing the game, it was always amazing to see these levels without enemies. It’s almost like seeing these realms before they were taken over by the main bosses. The serenity mixed with the satisfaction of finishing the game was always a nice reward.

When we take a look at the games that came after Spyro: Year of The Dragon, Elora sort of disappeared from the franchise, only making an appearance in Spyro: The Cortex Conspiracy for Game Boy Advance (GBA). This is a shame because out of all the main characters introduced in Ripto’s Rage, Elora is the only one who doesn’t continue to make regular appearances. Hunter, the Professor, and Moneybags the extortionist all become mainstays. It would be nice to see Elora stick around this time. Perhaps we’d see a nice friendship develop between Elora and Bianca.

Just like Elora, Gnasty Gnorc fell into obscurity after Spyro the Dragon when he was defeated by Spyro. Yes, he came back in A Hero’s Tail, but let’s be real. That title is an anomaly when we look at the series. The vibes just weren’t the same. It’s weird to think about, but Ripto shifted into this role as Spyro’s main rival and antagonist after the second game. Yes, Ripto makes for a great foe, but you never forget your first. Maybe Toys for Bob can find room for the original big bad of the Spyro series. After all, Gnasty never got an apology for the ugly comment.

Spyro: Enter the Dragonfly did not get much right. In fact, it’s widely regarded as the beginning of the downward slope for the series. Between rushed deadlines, bad programming and optimization, and half-baked concepts, it’s no wonder that fans of the series don’t look bad on this title with fondness. But, one thing that added interest and could be better if done right is the different breath abilities. In the game, Spyro gains the ability to breath electricity, ice, and bubbles (for catching the baby dragonflies). Imagine if Toys for Bob perfected this feature and it was put to good use in a sequel. Truth be told, the electric breath worked wonders and almost made Spyro’s standard fire breath obsolete. This means that with some quality testing and level design, this feature could be an actual game changer.

Introduced in Ripto’s Rage and then never seen again, the intros and outros for each level added to the immersion of the story and gave a sense that the denizens of these realms existed before and after Spyro made his way through their worlds. We all remember the first time we feasted our eyes on the monks chanting while the yeti growled menacingly at the camera. Or how Handel and Greta were sneaking through Scorch on a mission before Handel gets tricked by the guards with the old lollipop bait. It’d be nice to see these make a return in the series.