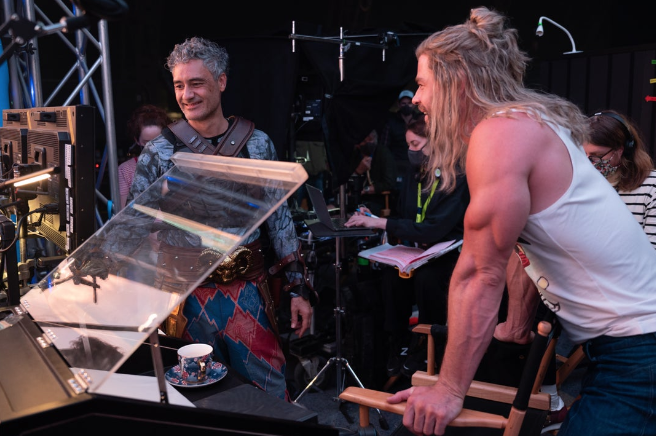 Premiering July 8, Thor: Love and Thunder follows Thor on his quest for inner peace. Sadly his journey to self-realization is interrupted when Gorr the God Butcher is gifted with All-Black the Necrosword. Over-the-top naming conventions aside, Gorr poses a threat not only to the children of New Asgaard but also to worlds all over the universe. He seeks the complete extinction of the gods and doesn’t care who he has to vanquish to get it. Thor cannot let this happen, but he can’t do it alone. With the help of Stormbreaker, King Valkyrie, and a surprising new ally in his ex-girlfriend Jane (who now seems to also be a Thor?), Thor rushes across time to save his own existence.

Christian Bale started the discussion by saying, “We all have our superpower and it’s voting,” in response to the Supreme Court ruling to overturn Roe vs. Wade. Everyone agreed, and it was a thoughtful acknowledgment of the somber news.

Chris Hemsworth talked about being more involved in the evolution of his character and how much he enjoyed the humor that was added. Producer Kevin Feige added that there were times when he was like, “Is that Chris being funny, or is it just that the scene is funny? No, that’s Chris!” Hemsworth talked about how he’s built confidence in how far he can take the character and looks forward to seeing more of his evolution.

Tessa Thompson was excited to see Valkyrie’s growth and come into her own as a leader. She said there was still a bit of the old adventurous Valkyrie, but she loved that there was a good balance. She loved how fun the script was and credits director Taika Waititi with creating a creative atmosphere.

When asked how it felt to be involved, Bale said, “It’s been a lot of bloody fun!” He went on to say they looked for the most broken, mentally jilted man they could find and thought, “Let’s get Christian Bale!” He credited a team of make-up and design people for helping to bring Gorr to his creepy best. Hemsworth commented that Bale as Gorr was his favorite villain so far.

Waititi spoke about the musical inspirations he had for the film. He’s always loved the mood of the ’80s and remembers spending hours perfecting the Metallica logo in school. He also spoke about using StageCraft virtual production technology provided by Industrial Light & Magic. It creates a custom volume room that makes for some pretty gorgeous shots.

Design-wise, mention was made of the differing Marvel credits at the beginning of the film. Feige said it was always the intention that the Marvel logo promises a different experience. This informed logos for Ms. Marvel, Moon KnightI, and Thor as well as others.

Portman loved Jane’s storyline and was impressed by the way the physical fitness and choreo training got her into the role. Hemsworth added, “Natalie led the charge in the gym, and we were trying to keep up with her!” Portman also talked up Waititi’s directing methods, which were new to her: “There were times we’d be shooting, and he’d just throw out the script!” She credited the improvisational nature with allowing her to flex her creative muscles and learn new skills. It also allowed Portman to help craft Jane’s character with really pleasing results.

Perhaps the biggest news of all was Feige announcing that Marvel Studios would be at San Diego Comic-Con in July. This is the first official in-person convention since the shutdowns (there was an in-person Special Edition in 2021, but this year will have full attendance). With the opening of the Spiderman museum happening at the same time, we were wondering if Marvel would make an official appearance. We’re excited for whatever comes up!

The conference ended with ET’s Marfuggi wrapping up over a soundtrack of Waititi beatboxing. He’s come a long way, and he’s brought the now formidable Thor franchise with him. The cast had a fun time, and they worked so well together. It’s terrific to see the new life that Waititi has breathed into the franchise, and everyone is growing because of it. The film features Hemsworth as a producing partner, and there are several long-standing cameos that only add to the growing number of easter eggs and inside jokes. Audiences love this because it acts as a pay-off for their investment. Thor: Love and Thunder is quite possibly the best film in the franchise and is the true epitome of “Started from the bottom now we here.”

Thor: Love and Thunder will premiere on July 8, 2022. And be sure to stay tuned for not one, but two end credit scenes that you will not want to miss!

SDCC Exclusive: Marvel Reveals ‘I Am Groot’ and ‘What If…?’ Trailers